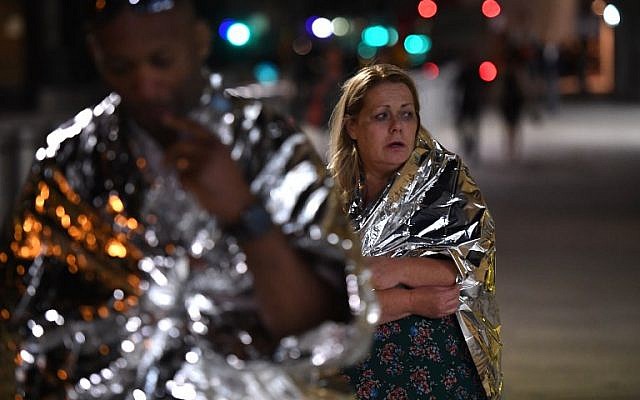 Members of the public, wrapped in emergency blankets leave the scene of a terror attack on London Bridge in central London on June 3, 2017. (AFP PHOTO / Chris J Ratcliffe)

This Sunday up to 1,000 sympathisers of a terror organisation will march through London with impunity. Protestors at this ‘Al-Quds (Jerusalem) Day Rally’ will raise the flag of the anti-Semitic, sectarian shia-jihadist group Hezbollah, while the London Metropolitan Police protects them.

We know this will happen, because the rally’s organisers at the so-called Islamic Human Rights Commission (IHRC) have brazenly issued guidelines encouraging protestors to do so.

Coming just under two weeks since it was revealed to public incredulity that London bridge terrorist Khurram Butt had flown the ISIS flag without consequence on a television documentary, our impotency in the face of terrorist propaganda will once again be mocked. Khurram Butt proclaimed ‘this is for Allah’ as he ruthlessly slit, stabbed and slashed his innocent victims to death with his dagger. The Hezbollah flag bears the words “Party of Allah” in Arabic, along with a dagger and a raised fist clenching an assault rifle.

Much to the dismay of antisemitism campaigners, the London Met have confirmed that the rally is indeed set to go ahead, bringing central London to a halt so that Hezbollah-supporters may march through the heart of our capital.

Hezbollah’s Secretary-General Hassan Nasrallah said: “If Jews all gather in Israel, it will save us the trouble of going after them worldwide.” Let there be no doubt, Hezbollah is an anti-Semitic, sectarian shia-jihadist terror organisation that advocates the annihilation of Jews worldwide, and has militarily backed Assad’s atrocities in Syria for geo-sectarian reasons at the behest of their state sponsor Iran.

It was in fact the Iranian regime newly under the control of Ayatollah Khomeini in 1979 that initiated the annual marking of ‘Al Quds Day’ on the third Friday of the month of Ramadan with the opening declaration “Israel, the enemy of mankind, the enemy of humanity…” The rally’s London organisers, the IHRC, have been acting mouthpieces for Iranian Islamism in Britain for a long time since.

Though the British government has proscribed the “military wing” of Hezbollah under the Terrorism Act 2000, its “political wing” is not proscribed. Section 13 of the Terrorism Act is clear that “A person in a public place commits an offence if he wears an item of clothing, or wears, carries or displays an article, in such a way or in such circumstances as to arouse reasonable suspicion that he is a member or supporter of a proscribed organisation”. Ignoring this, the Metropolitan Police Service has taken the view that if someone carries a Hezbollah flag, officers should presume that the person is supporting Hezbollah’s “political activity” and not any of Hezbollah’s acts of terrorism.

Even Hezbollah refutes this arbitrary division.

Their Deputy Secretary-General Naim Qassem told in the Los Angeles Times that the “same leadership that directs the parliamentary and government work also leads jihad actions in the struggle against Israel.

In other words, our politicians fudged it.

Putting aside the fiction that Hizbollah has political and military wings, because updating legislation will inevitably take time, the Charities Commission still has a chance to act.

The IHRC remains a registered charity in England and Wales, allowing it to have partnered with our police force’s anti-terror units and testify as ‘experts’ at Parliament.

Charity commission guidelines state clearly that “any links between a charity and terrorism are totally unacceptable and corrosive of public confidence in charities..even indirect or informal links with a terrorist organisation pose unacceptable risks to the property of a charity and its proper and effective administration”.

These guidelines meet a lower threshold than criminal culpability, stating “even if the link or association did not amount to a criminal offence, it is difficult to see how a charity could adequately manage the risks to the charity and find a way in which the trustees could properly discharge their charity law duties and responsibilities.”

Yet despite frequent complaints, the Charity Commission has yet to open a statutory inquiry into the IHRC, invoking the new counter-extremism powers it requested and received from Parliament.

Why must ordinary everyday British Muslims be expected to bear the brunt of public anger because of indefensible political correctness of our institutions, politicians and bureaucrats?

Imagine the BNP were ingrained into the fabric of our institutions in this way. Such gross negligence towards Islamism in this country can only be explained by the harbouring of a bigotry of low expectations towards Muslim extremists. And it is inevitably our communities, Muslims or otherwise, who suffer.

London’s Mayor Sadiq Khan has spoken passionately about his anger at terrorists abusing his faith to kill innocents. The mayor’s personal intervention and appeal to the Met’s Commissioner Cressida Dick, at this late hour is needed. Polarised times such as these require leadership. Savvy political statements are for ordinary politicians. But it takes a statesman to show true leadership. Anything less is an insult to all those we lost to jihadist attacks in Westminster, Manchester and London Bridge over the last three months.

To honour those victims, terrorist flags must not fly in London this Sunday.

It is as simple as that.