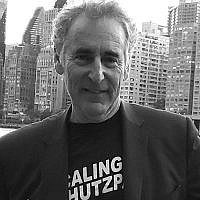 While this incident may seem small comparative to the larger hate issues we are encountering, consider that in order to eliminate the damage a vine does to a tree, you must eliminate the root.

One day a week my wife and I venture on some outing that benefits from the multitude of venues and/or happenings in the metro NY area. If there is a Jewish theme, that much more appealing.

A couple of weeks ago our destination was the NY Historical Society and its exhibit – The History of the Jewish Deli – I’ll Have What She’s Having.

Frankly, it is a delightful exhibit bringing back memories and providing new insights to the Deli phenomena in the United States, with New York as its epicenter.

What fun, until we came across a display that shook me. It depicted a Jewish Deli – Leb’s in Georgia that would not serve blacks. It presented people picketing outside in protest.

Here is the photo they displayed with a description of what happened.

There was a most diverse crowd in attendance, imagine the negative influence this can have without deserved balance. This exhibit will run through April 2023. I believe, we always share the truth, no matter how dark. However, in singling out this negative incident there certainly can be a contribution to fomenting hate.Prior to this incident Rabbi Abraham Joshua Heschel marched with Dr. King, Jews were instrumental in forming the NAACP and on the front lines supporting civil rights. I also believe that Jewish shop owners did serve people of color while proportionality most others did not.
Advertisement

I complained on site and met with a supervisor (a person of color) who demonstrated a concerned reaction with a promise to follow through. A curator did contact me, she too shared her understanding and concern. There was interaction, they met on it and decided to leave it as is since it is historically accurate. As a person involved in media, I know well the distorted impact of misplacing or misarranging content can have.

Below is an article published in 2015 with respected authority to it. Addressed are some of the issues raised in this writing. It contains further information on Jewish Owned Delicatessens and retailers’ relations with the Black community. The author presents an honest and healthy balance representing different dynamics. Note, he brings up Leb’s story and contrasts that with a Deli in Chicago that sold ownership to an African American employee in the early 70s and another Deli in Chicago known for being the “most integrated store in the world,” many decades later visited by a campaigning Barak Obama.

While contacting some institutions and people of influence, I received a response indicating that this was wrong, but at this time they were addressing larger issues. The ADL is looking into this as of this writing. I sense we will always be dealing with larger issues if we do not whittle away at the roots. Whether you are a fan of Mayor Guiliani or not, his immediate campaign at smaller issues like “broken windows” sent a strong message initiating a welcomed result in the downturn of crime and increase in quality of life in NYC.

My call is to either tear down that display or create a needed balance of information directly around it to help counter unnecessary hate and its consequences.

About the Author
Co-founded with Nan Klein in 1976 one of the country's first video companies. We produce programming for the top organizations in the world. We live a fully Shomer Shabbat life in Woodmere, NY.
Related Topics
Related Posts
Harold Klein