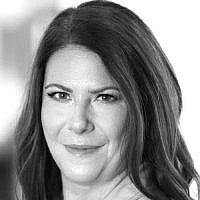 The Blogs
Rachel Lithgow
Apply for a Blog
Advertisement
Please note that the posts on The Blogs are contributed by third parties. The opinions, facts and any media content in them are presented solely by the authors, and neither The Times of Israel nor its partners assume any responsibility for them. Please contact us in case of abuse. In case of abuse,
Report this post.

Food is on the minds for so many of us during this challenging and unprecedented moment in time. Jews, who under normal circumstances spend a lot of time thinking about food, are upping the food game in the age of COVID-19. In the beginning, food has played a prominent role in Judaism throughout the ages. Eve’s seduction wasn’t the snake per se, it was the fruit itself that she found irresistible. Abraham invited God’s angels into his tent on a hot day for food and drink, confirming his generosity and sealing his place as a recipient of their blessings. Virtually all major Jewish holidays serve ritualized food as part of the observance, and the basic laws of kashrut inform all aspects of what Jews are supposed to put into their mouths, and even inform us how to eat.

An almost obsessive focus on food has long been a part of being a Jewish person. Over the last hundred years, globalization and technology has made even the most exotic of food and ingredients accessible with easy to follow recipes and instructions for culinary glory. But what if food isn’t really about, well, food? What if it is more than sustenance, pleasure or even simple boredom while sheltering in place?

These are the questions that Foodish (www.foodish.network/en), a new initiative developed by the Museum of the Jewish People at Beit Hatfutsot (MJP) hopes to explore. More than simply a collection of recipes or beautiful images, Foodish hopes to create a global platform that engages and ignites a feeling of identity in all Jews, and Jewish allies, no matter the observance level or participation in organized Jewish life. It is about stories, family, heritage and ultimately, identity. There are approximately 14.5 million Jewish people in the world. The largest percentage of Jews are under 40, and now describe themselves with the word all Jewish professionals seem to dread: unaffiliated. Foodish’s assumption is that these unaffiliated Jews aren’t abandoning Judaism, but rather what they see as antiquated Jewish institutional life. The dilemma is simple in set up and hard in solution. How can Jews connect to their identity, especially in these dark days, in a way that feels fresh and modern but is in fact rooted in tradition? Food isn’t the only avenue, but for our taste buds, it’s the catch/catch all. It can be performed by anyone anywhere on their own terms, but we can provide the tools to make it as authentic, modern or traditional as the end user chooses.

In fact, this has been a conversation that we at MJP have been having for a long time internally and goes hand in hand with the 10 year renewal we are about to complete. We had planned to introduce Foodish after the opening of the museum’s expansion and unveiling of the new Core Exhibition in October of 2020, and once the world returned to at least some semblance of normalcy. Until a remarkable thing happened: The Great Big Jewish Food Festival. It seems that isolation is the mother of invention, and when we learned that foodies, restauranteurs, food writers and influencers were coming together to create a free online 10-day festival that encompasses all kinds of conversations around food, cooking, recipe sharing and story-telling, we knew that Foodish’s moment had come. In record time, the good folks at Gefilteria, led by Jeffery Yoskowitz and Liz Alpern, have miraculously put together the leading voices in the Jewish food world together in all kinds of unique ways. The schedule is thorough and impressive, and people can sign up for any of it at www.jewishfoodfest.org.

Throughout its 42 year history, MJP has offered a 360-degree view of Peoplehood writ large; from our digital assets to our programs, events and our newly curated Core Exhibition. The missing piece was food. Like all things Jewish, we want this new piece of our pie (oops I did it again!), Foodish, to be an opportunity to engage, to celebrate, and of course, to debate (would it even be a Jewish thing if there was no healthy debate involved?).

Our vision is pretty simple: to create a digital platform for food beyond a recipe share or an Instagram post. Want to share your grandmother’s sweet and sour meatball recipe with your cousin? Use Foodish. Your cousin thinks you got the ingredients wrong? He can tell you through photo, video or text on Foodish. Your aunt was cleaning out her closet and found a picture of your grandmother in her kitchen making the now controversial meatballs? Post it on Foodish. Your mother finds the original handwritten recipe? She can post it on Foodish. Ultimately, you can create your own digital online family album, and share it with anyone and everyone. Share your stories, videos, photographs and memories with us through Foodish. In turn, others will share their stories with you. In the end, we are all part of the story, and your story matters.

About the Author
Rachel Lithgow is the VP of MJP, Beit Hatfutsot International, and previously was the CEO of Jewish museums such as The LA Museum of the Holocaust and The American Jewish Historical Society.
Comments