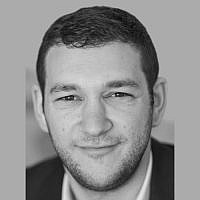 The Blogs
Carl Peters
Apply for a Blog
Please note that the posts on The Blogs are contributed by third parties. The opinions, facts and any media content in them are presented solely by the authors, and neither The Times of Israel nor its partners assume any responsibility for them. Please contact us in case of abuse. In case of abuse,
Report this post.

One of the chief reasons for me to not make Aliyah was leaving behind my true love. A solid partner with whom I have experienced some of life’s highest and lowest moments. Romantic weekends in Chesterfield and dark, illicit evenings in Peterborough sharing a flask of tea and a cheese and onion pie. My love of course is Bury Football Club.

As many readers can attest, leaving a lover for a sunnier life abroad is a tough pill to swallow. Absence can make the heart grow fonder, but as I have witnessed Bury’s dire form so far this season, I have started to wonder whether or not I could find a new source of misery and heartache in the holy land.

Over a Guinness in Tel Aviv’s Irish pub, my football-loving British pals proposed the notion of going to see Hapoel Tel Aviv, in their home game against Beitar Tel Aviv Ramla. Was romance afoot?

Off we went, skipping into the ground alongside the Hapoel Ultras (fanatics), all in red and as vocal as football supporters can get. For those who’ve never attended an Israeli football game, it consists of average quality players being berated by loud youths, who spend as much time watching the game as they do spitting those annoying sunflower seeds at the floor and questioning the parentage of Maccabi Tel Aviv supporters.

But what caught my eye, aside from the open smoking of illegal substances in the stadium, was the absence of the away team’s supporters. There were around 25 fans in the away section…probably the players’ families. Even Bury away at Woking could pull a safer minyan than that.

Having always supported a lower league side in the UK, I naturally root for the underdog. I prefer going into a game of football without too much expectation of victory, as the joy of any success is then much greater. The fervor and emotion of the game – especially when it’s outside the elite level – is unlike anything else in life. There is no ecstasy like a goal for your team; no smugness like winning a local derby and there’s no other reason in life to be stood topless in mid-December, shirt whirling round your head singing the Seven Nation Army motif.

In the UK, it’s part of the football watching experience to support your guys away from home, have some beers and sing songs, usually in a semi-frozen state. What makes the away day experience for me is the possibility that we could win on foreign turf and that I’m surrounded by the other die-hards willing to schlep 4 hours down the M1 for a day out watching our beloved Bury.

And then it struck me; why don’t we create an away day experience for ex-pat football fans living in Israel? In doing so we could – for one day – also support a team as if they were our own, providing the nebech team in question with much needed match-day support. Win-Win.

We figured that here in Israel, a country that pulls in people from all over the globe, there must be loads of football fans who have left their teams back home. Surely they would join us for the ride? We hashed out the particulars of how it would best work and then…Away Days Israel was born.

It’s a simple formula: We plan all the logistics including tickets and transport. Everyone meets in a pub on match day. We tell them in advance what colour shirt to wear. We then reveal the fixture and the team we are supporting. Give out the match day programme. Go to the game. Sing some newly created songs. Back on the bus in time for Shabbat dinner. 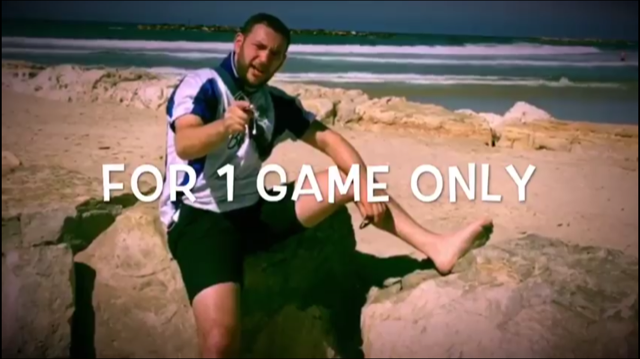 A still of the promo video for away days.

In the true spirit of Israeli business culture, we quickly branded ourselves a ‘start up’ to gain credibility amongst our peers, (despite non-viable profitability), then set up a Facebook page and off we went.

Football is universal; bringing people together over a common language. The first connection between two people can quite often be about a mutual love of football. Since launching Away Days Israel at the end of February, we have been taken aback by the numerous approaches from many media sources, various ex-pat organisations, as well as Israel-based social programs. Proof – if ever it was needed – that the love and interest in football is enduring. Without trying to over-shine the boot, our hair-brain idea, forged out of slightly laddish dreaming demonstrates that football, regardless of quality, has an un-quantifiable power. By channelling this sentiment, we have found something that can unite people who are away from home and who may be trying to find new friends and new connections in a foreign land.

About the Author
Carl is a 31 year old Brit who now lives in Tel Aviv. He's a bar owner and a quiz master
Related Topics
Related Posts
Comments