Reading about the horrible riots against Muslims in New Delhi brings back memories of hearing in our Jewish community about what pogroms were like in Eastern Europe in the 19th and early 20th centuries.

Government officials and religious leaders then stirred up passions against Jews –sometimes connected to Easter Sunday and the old deicide charge; other times it could be a fraudulent blood libel charge that Jews had abducted a Christian child and murdered him for his blood; or some other fantasy about Jews and power and poison.

And then the riots against Jews would ensue, with the police either looking on idly or even encouraging the assaults against the Jewish population. 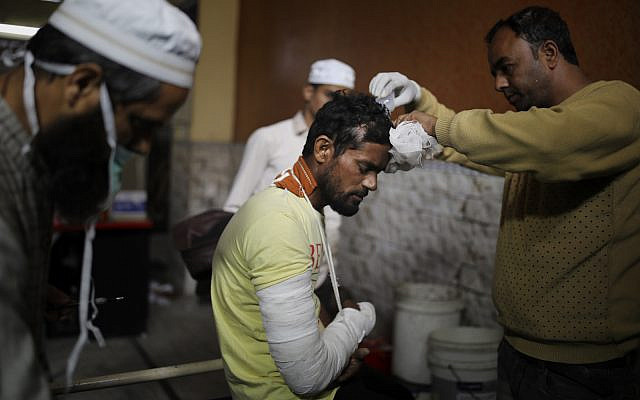 Paramedics attend to the wounds of Mohammad Illyas at Al-Hind hospital in Old Mustafabad neighborhood of New Delhi, India. The hospital in the riot-torn neighborhood turned from a community clinic into a trauma ward, its doctors, for the first time, dealing with injuries like gunshot wounds, crushed skulls and torn male genitals. Friday, Feb. 28, 2020 (AP Photo/Altaf Qadri)

That’s what’s been happening in Delhi over the past few weeks, a pogrom with much the same characteristics: inflammatory rhetoric by government officials after the passage of a citizenship law which, at the least, discriminated against India’s Muslim population and even hinted at dispossessing India’s Muslims. Then armed and masked Hindu gangs invading homes of Muslims, assaulting families, torching houses. All the while the police stood by, doing nothing while the violence happened.

The world, understandably obsessed with the Coronavirus, is largely busy elsewhere. We need to pay attention, speak out and consider what actions are necessary to protect the Muslim community.

A little context. India was born as an independent nation on the heels of Hindu- Muslim strife. The Muslim nation of Pakistan came into being as tens of millions of Muslims fled India in the largest population exchange in the history of mankind.

India, however, transformed itself not only into the world’s largest democracy, but one that had a place in its Hindu majority country for the many millions of Muslims who remained in the country.

Today, that is all under stress due to the surge of Hindu nationalism.

The fact that in some Muslim countries there is little pluralism or respect for non-Muslim religions in no way negates the horror of what has been taking place in Delhi and what could be lost in India should these trends continue. 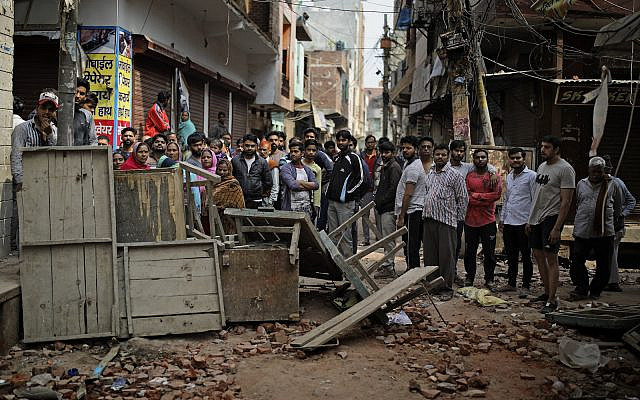 Residents stand behind a makeshift barrier at the mouth to a lane splattered with bricks following violence in New Delhi, India, Friday, Feb. 28, 2020. (AP Photo/Altaf Qadri)

What to do? At the very least we need to hear a strong and clear moral voice from the international community.

While the issue here is not genocide, when we think of the failures of the international community to react with immediacy and with sufficient power to what took place in Bosnia and Rwanda or more recently in Myanmar and Syria, we know how disastrous international inaction can be.

And here we come to the role of the United States. With all of our failings over the decades, American leadership has been a force for democracy and protection of human rights in the world. Nations and peoples around the world first turned to America for assistance, not only because we were the strongest economic and military nation in the world, but because of the values we stood for and projected.

Diminishing American leadership in these areas, starting with the Obama Administration’s inaction in Syria, and now with the Trump Administration’s transactional and populist nationalist approaches to foreign policy, attention to human rights seems to be taking a back seat.

Seeing the protection of minorities only in terms of moral values underestimates the significant national interests at stake as well. India continuing on this nationalist path will not be as valuable an ally to the United States. We have seen this with Russia as Putin has violated democratic norms every day in Russia and invariably becomes a more hostile foreign foe, taking over Crimea and subverting our elections.

India is a proud and independent nation that experienced the trauma of colonialism and emerged with a successful and vibrant democratic, pluralistic society. It is not our task to tell Indians how to live their lives.

It is our task, however, to stand up loud and clear when extreme actions such as the pogrom of Delhi take place. At the very least, the Indian government needs to know that if this violence against Muslims continues and expands, that relations between our two countries cannot remain the same. And we in the Jewish community should speak up, clearly and unequivocally.