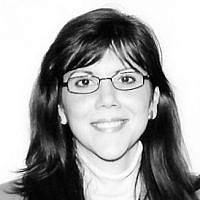 The Blogs
Yleem D.S. Poblete
Apply for a Blog
Advertisement
Please note that the posts on The Blogs are contributed by third parties. The opinions, facts and any media content in them are presented solely by the authors, and neither The Times of Israel nor its partners assume any responsibility for them. Please contact us in case of abuse. In case of abuse,
Report this post.

The Gaza conflict has again revealed that Hamas is not alone in its campaign against Israel. It has a vast and diverse terrorist network that supplies it with the resources it needs to carry out its destructive objectives. This web of terror must be targeted. It is the only way to prevent Hamas from rearming and ensuring sustained calm.

Not shy about the terrorist collaboration, Iran’s Deputy Minister for Arab and Foreign Affairs, Hossein Amir Abdollahian, recently underscored they “regularly support Hamas…and all factions of the Palestinian resistance” and that the regime had been in constant communication with Hamas leaders. Iran’s Supreme Leader Ayatollah Ali Khamenei exhorted the Muslim world to support Hamas and provide weapons to use against Israel. And IRGC commander Mohammad Ali Jafari said on Iran’s Al-Alam that the regime will provide weapons and technology to groups attacking Israel.

U.S. officials have confirmed Iran has been providing funds to Hamas and helping its militarization. This is part of Tehran’s modus operandi. Yet, U.S. and European sanctions on Iran were eased again last month. The deadline for an agreement on Iran’s nuclear program was extended until November and the two pillar threats — terrorism and proliferation –are being treated as distinct from each other, rather than intertwined. This must be corrected. Pressure on the regime in Tehran, its surrogates, and enablers must be increased not reduced.

Iran, however, is not Hamas’ only arms supplier. The foreign terrorist group is again looking to another reliable ally, North Korea, to replenish its weapons stockpiles and provide it with mission critical communications equipment. Hamas and the trading company reportedly brokering the deal could be subject to sanctions under the Iran, North Korea, and Syria Nonproliferation Act (INKSNA). This U.S. law requires punitive action against entities or individuals who transfer to or acquire from these three pariah states — North Korea, in this instance — military or proliferation-related equipment or technology listed under a myriad of international agreements.

Pyongyang’s relationship with Islamist militants is not new. It has a long history of selling arms in the Middle East, including a cache of grenades, missiles, rocket launchers and other armaments bound for Iran that were seized at Bangkok Airport in December 2009. It was also revealed in a recent U.S. Federal Court decision that North Korea, in coordination with Iran and Syria, had provided material support to Hezbollah, including advanced weaponry and assistance building underground tunnels to carry out terrorist attacks in 2006 against Israel.

North Korea’s pivotal role in the global terrorist network includes providing ballistic missile technology and expertise to Iran and aiding Syria’s missile and covert nuclear activities. The Al-Kibar facility, for example, was built by the Syrian regime with Pyongyang’s help and followed a model North Korea used as part of its nuclear weapons program. Had an Israeli air strike not destroyed Al-Kibar, the Syrian regime could have employed more than chemical weapons against its people; regional neighbors and the international community could be facing a twin nuclear threat from both Syria and Iran.

Evidence linking North Korea with terrorist groups and their patrons, requires the DPRK’s re-designation by the U.S. State Department as a state-sponsor of terrorism and an initial step in targeting the convergence of terrorism and proliferation involving Pyongyang, Tehran, Hamas and Hezbollah. The upcoming 69th session of the UN General Assembly affords another critical opportunity to implement a comprehensive approach to these joint threats by strengthening sanctions resolutions relating to Iran and North Korean proliferation to include their support for global terrorist activities. The United States, as president of the UN Security Council in September, should use the 2001 terrorism-related UN resolutions to secure recognition of Hamas, Hezbollah, and other non al-Qaeda affiliated Islamist militants as threats to global peace and security. By extension, states, groups, or individuals aiding and abetting these terrorists would be subject to punitive measures.

The Gaza conflict may appear to be an isolated confrontation between Israel and Hamas but it is part of a larger terrorist complot. The global response must therefore reflect an understanding of the interdependence between Islamist militants, their supporters and their state-sponsors and how policies against one bad actor can affect the actions of others.

About the Author
Yleem D.S. Poblete, PhD is former Chief of Staff to the U.S. House of Representatives’ Committee on Foreign Affairs. During her Hill tenure, Dr. Poblete was responsible for numerous bills on Iran, Syria, North Korea and the Palestinian Authority that were enacted into law.
Comments