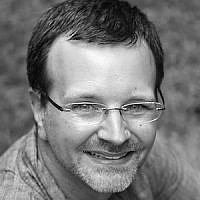 The Blogs
Jason Caplan
Apply for a Blog
Please note that the posts on The Blogs are contributed by third parties. The opinions, facts and any media content in them are presented solely by the authors, and neither The Times of Israel nor its partners assume any responsibility for them. Please contact us in case of abuse. In case of abuse,
Report this post.

The evening is here, and we are completing the observance of Tisha B’Av. Last night, our congregation sat on the floor together, to mourn the destruction of the Beit Mikdash in Yerushalayim. It is always a meaningful service and day for me, as our people reflect on what binds us and what could, G-d forbid, tear us apart. Each year we resolve to improve ourselves and build a stronger people based on trust and understanding.

Also on this day, I think about what the future Temple would be. Who would come and what would take place?  Would Rambam’s view be true? That the Jews of 2000 years ago were permitted by Hashem to bring sacrifices because that was the common world practice?  Yet, Rambam believed that the sacrifices would continue in the messianic era. Or would the opinion of the Ramban be true? That the letters of the Torah in the messianic times would re arrange themselves and clearly state that the humans would elevate beyond sacrifices?

What would replace sacrifices?  I believe that the Navi, the Prophet, Yeshayahu provides us guidance on the future Temple.  “For My house shall be called a house of prayer for all peoples”

With all of the different languages, religions, prayer books, and forms of meditation, what kind of prayer could all of the people of the world agree on? My dream and solution to this question is music, more specifically, improvisational music. This is the music that springs from the heart and soul. It is also a language, that requires thought, organization, along with spontaneity. I believe that every person can learn and experience the joy of playing improvisational music. It can be accessed as a universal language and prayer that could ultimately be a pathway to trust and understanding globally.

Could it work?  I have seen joy everywhere I have taught music this way.  But, a better question….  Where did this dream start?  Let me tell you the story about a searching young man, a great Chassidic Rabbi, and a revolutionary jazz saxophonist.

At that critical time in a young man’s life, my bar mitzvah, I remember being surrounded by family and celebration.  However, internally, I felt that something was not right. There was a huge chasm between my loyalty to the Jewish people and my basic knowledge of Judaism.  The photographer gave me a Torah to hold for pictures, and I remember thinking, “I wonder what’s in this thing?  Shouldn’t I have some ability to read and understand this?”

Yet, I had no intention to study Judaism. I wanted the Eastern religions, guitar, jazz music, and meditation. In 1996 I entered Emory University without any interest in the college party life. After feeling empty from the Eastern studies, I sought out the local Orthodox synagogue at Beth Jacob and quickly fell in love with the community and Shabbat observance.   At the same time, a Rabbi from Chabad-Lubavitch started classes on campus.  That was my introduction to Chassidic thought. It wasn’t long before I discovered Rebbe Nachman of Breslov.  This started a life long fascination with Breslov Chassidus, as an outside observer and a devoted student. Why is Rebbe Nachman so unique? Why did I continue to study his teachings and practice his meditation for the next 20 years?

Rebbe Nachman was the great grandson of the founder of the Chassidic movement, The Baal Shem Tov. He saw trends of power structures and political intrigue being created around the simple teachings of his great grandfather.  He wanted to ensure the legacy of simplicity, happiness, song, dance, individuality, and service to the Creator. One of Rebbe Nachman’s principle teaching is Hitbodedut.  It translates to mean ‘self seclusion’ and in Jewish mystical history, it has taken many forms. Overall, it means a person’s time alone, with all of one’s thoughts directed solely to the Creator.

Rebbe Nachman’s unique insight was to add speaking to the Creator in one’s own language. He advised his followers to talk to the Creator about all of life’s details, large and small, for an hour a day.  As a friend, as a child, as a servant.  I personally continue the practice from 1996. It is a simple, but powerful meditation that enlivens the relationship to G-d as real and practical. I love that there is  no system, way of sitting, or breathing technique. You simply talk it out.

One night in college, in my apartment at Calibre Woods, I was listening to saxophonist John Coltrane’s “Love Supreme”  Coltrane struggled through life as a jazz musician and seeker of truth. After a number of harsh life events and hitting rock bottom, he experienced a spiritual awakening and devoted his life to G-d. The music and linear notes are an expression of profound spiritual depth and a source of daily inspiration.

It was my habit to listen to “A Love Supreme” every evening while writing class papers.  On this particular night the idea flashed in my mind – “This is Hitbodedut, this is a music Hitbodedut. It’s the Universal way of speaking to the Creator!”  If you have listened or may listen in the future, you will hear Coltrane speaking with the Creator through music. He moves through all 12 keys, playing his main motive/idea, and elaborating it with melodic statements, rhythmic variety that is the work of human genius.

The idea gained momentum in my mind, a spark of enthusiasm that has burned ever since. The synthesis of these 2 outstanding thinkers set my course for developing an experience for all humans to connect with each other and the Creator in this way.  By combining Hitbodedut and the universal language of improvisation, I felt this meditation practice and prayer bringing me closer to the Creator.

I believe this form of universal language can be the core communication for the future Temple. Visitors from around the world would gather and talk to each other through Hashem’s language, music. There would be no issue to agree or disagree with, only the fundamental joy of exchanging ideas, listening and responding. I see it as fitting that in the future Temple, the sacrifice would be our own human language and worldviews, to enter a building of complete unity. Perhaps we could say that both Rambam and Ramban were correct in many ways. The sacrifices will continue, but what is offered before Hashem will not be animals. The Future Temple will be a place to sacrifice false ideas, tribalism, and the doctrines that claim one people is greater than another.

In its place, human society will be based on the doctrines that point the way to peace and unity of humankind. We will embrace the doctrine of One G-d who created one human family. Together we will fulfill the verse for both the Torah and the Temple —  “Its ways are ways of pleasantness and all its paths are peace.” (Proverbs 3:17)

About the Author
Jason Caplan is an entrepreneur living in Memphis, TN with his wife, and 2 children. He is a blues guitarist and enjoys performing at a variety of venues in Memphis. He teaches guitar to private students. Jason is also building a financial advisory practice. His primary social project is the Universal Language Room -- a dynamic community experience, synthesizing the ideas of Rebbe Nachman of Breslov and jazz saxophonist John Coltrane. At a ULR, participants learn to communicate and listen solely through improvisational music. Jason believes this program will help individuals communicate ideas and strengthen the bonds of trust in our society. This openness and enjoyment of dialogue and exchange of ideas can provide new, creative ways to meeting the challenges of modern society. Jason also created The Beit Tzitzit, Home of the Fringe, for Jews who live on the outside of the Jewish community life but love the teachings of Torah and want to find kindred spirits.
Related Topics
Related Posts
Comments