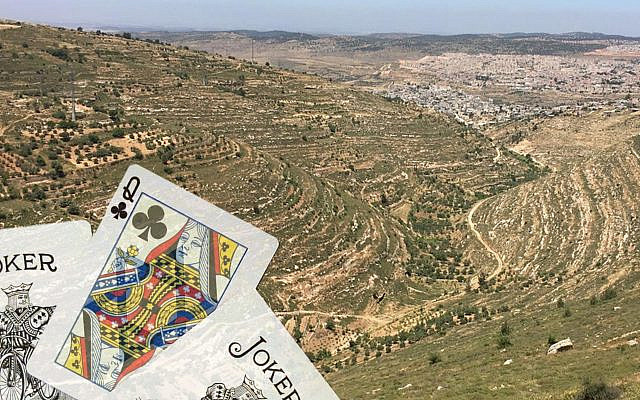 When Jews and Jewish organizations in the Diaspora consider Israel’s possible extension of sovereignty over parts of Judea, Samaria and the Jordan Valley (aka, “Annexation”), they should embrace the first portion of Rabbi Hillel’s often quoted declarative triad: “If I am not for myself, who will be for me?”  While Hillel goes on to address consideration for others (“If I am not for others, what am I?”) and he revealed a bias for timely action (“If not now, when?”), it was his first aphorism that taught us to earn the support and respect of others by being pro-active, self-reliant and self-sufficient.

Israel’s original sovereignty over Judea and Samaria has been established with ancient biblical texts and validated with abundant indigenous archaeological evidence. In more modern times, Jewish sovereignty was legally conferred by the San Remo Agreement of 1920, and the League of Nations declaration in 1922. These helped in the drafting of the United Nations Palestine Partition plan in 1947. And lastly, Israel can also look back at multiple generous negotiation offers of and missed opportunities for a compromise that would have led to a Palestinian state.

Yes, this may be an inconvenient time for “truth.” Notwithstanding views on the current American president or the Israeli prime minister, these cold, hard facts have to be our policy cornerstone…our strategy of truth over lies. We must  resist the temptation to put the realities of the middle east on hold and to dial down our support for Israel. Our adversaries still sing out “death to the Jews … push Israel into the sea…from the river to the sea…no peace, no recognition, no negotiation.” They still celebrate terrorists as “martyrs,” pay them and their families salaries, and educate their children with poisonous lies. Tens of thousands of missiles are aimed at Israel’s heartland and Iran’s malignant activities continue.

On a New York City sidewalk, you might see three-card monte hustlers working their trade. The dealer, using a blend of magic, illusion and con-job bravado, challenges the mark, to watch his shuffles, and then identify the Queen. Because the dealer employs misdirection, sleight-of-hand and often a distracting shill, you are going to lose.

Like the Queen in the three-card monte game, it is “truth” and legitimacy that can be hard to find. Truth is too easily masked in a swirl of popular cultural gimmicks, factual gymnastics, self-interest, and abandonment of reason. Again, our enemies are cunning and are emboldened by any lack of resolve or fluid Jewish values.

Jews hear discussions about growing anti-Semitism and anti-Zionism, here and abroad, that is often morphed into a generalized narrative about “hate.” They should be discomforted when the edgy theory of “intersectionality” that somehow links all of the victimized peoples, denies that the Jew’s genocide, expulsions and abuse is sufficiently grim for inclusion. Keep your eye on the Queen.

Recently, social conscious concern for the “indigenous” peoples of the world is in vogue, but this supposed enlightened “movement” rejects the Israelites who were one of the oldest, and best documented original people. Those twelve tribes of Israel, that dwelled on well-documented land and who predated Mohammad by over two thousand years, lose out in the new found love-fest for other indigenous natives. Keep your eye on the Queen.

We see Jews romanced by Tikkun Olam universalism that dilutes the already tiny army of supporters of Zion. Too often the media focuses on conflict in Israel and not on Israel’s first-on-the-ground disaster relief and medical breakthroughs. Keep your eye on the Queen.

Global mega-trends have obscured the simple truth that Israel has sought peace and pursued negotiations. The Muslim world, in spite of brutal decades of Sunni-Shia conflict, edges closer to accepting the reality of Israel and its place in their neighborhood. Concurrent with Israel’s history are both the ongoing Sunni-Shia battle and the equally confusing conflict between the West and Islam. Kim Ghattas’s recent compelling text, Black Wave, documents the chaotic struggle and leaves doubt about the unresolved outcome.

The large, influential pro-Israel Christian community needs to see that the Jews are unified with Israel. Hillel’s rhetoric question“… who will be for me?…” ponders how allies would assess our lack of action, advocacy and commitment. Our enemies are many, and our friends are few, and while an individual’s political decisions are driven by multiple concerns, support for Israel needs to be appreciated. We must respect our friends-by-choice political perspective and celebrate their righteous defense of Israel.

In this presidential election year, and with Covid-19 dragging on philanthropic endeavors, major Jewish organizations fear crossing into politically partisan no-man’s land that might provoke concerns about positions on Israel. The recent selection of Dianne Lob, a past president of HIAS, as the new President of the Conference of Presidents of Major Jewish Organizations highlights these concerns. During her tenure at HIAS (now using the acronym after dropping the too-Jewish word “Hebrew”), they aligned with the Council on American Islamic Relations (CAIR), a branch of the Muslim Brotherhood, Islamic Relief, IfNowNow and Jewish Voice for Peace. What message does that send?

Organizations should avoid any proclamation that “annexation” would destroy possibilities of a Palestinian state, that Jews are the impediment to peace, that Israel is in conflict with “international law,” or that somehow the US-Israel bond would be jeopardized. All these miss the opportunity to reinforce the factual basis for Israel’s actions. They can call out those who cynically distort the truth and they can support the objective of a Palestinian state and negotiated peace for Jews and Arabs. Lastly, they can advise their constituents to explore where all political candidates stand on supporting Israel. Their policy positions must begin with a respect for these underlying “truths,” and their leaders must not show “trembling knees” equivocating to make all parties happy.

These are confounding times and Israel needs informed, committed supporters. The world around us will judge our courage and will respect our actions to defend Israel on the basis of truth.