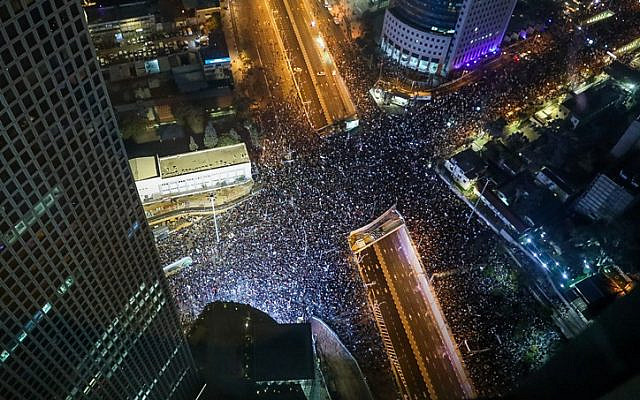 Israel is in turmoil, over a hundred thousand Israelis demonstrated Saturday night. The Supreme Court’s Chief Justice has sounded the alarm that the planned new government’s moves regarding Israel’s legal system are not ‘reform,’ but attempts to end judicial independence, silence courts and deal a fatal blow to the country’s democratic identity. We need to make our voices heard in support of Israel’s democracy and rule of law.

I have a deep emotional and existential regard for Israel as a Jewish and democratic state. Israel and the Diaspora are partners in a joint enterprise to strengthen Israel as a homeland of the Jewish People. It is essential that Diaspora Jewish communities be aware of recent developments in Israel that threaten this partnership and Israel’s proud judicial legacy. The potential detrimental impact on Israeli democracy will affect the North American and other Diaspora Jewish communities who view Israel as part of their identity. The vital role that Israeli courts play as the protectors of basic freedoms, equality, and human dignity and our self-understanding as Jews means that our communities must mobilize in the face of the imminent move to curtail this proud legacy which we in the Diaspora share.

Now that Minister of Justice Yariv Levin has presented his plans, we realize, along with many Israelis, including the deans of all law schools in Israel, all past Attorneys General and State Attorneys since 1975, the president of Israel’s Bar Association and thousands of Israeli lawyers, scores of retired judges, and many more – that if legislated and implemented, the plans would change the face of Israel’s judiciary and erode its rule of law and constitutional values.

These changes would, for the first time: give the governing coalition’s politicians a stranglehold over appointments to the High Court; interfere with the workings of the Court and drastically curtail its authority to pass judicial review over government actions and Knesset anti-constitutional legislation; set a term limit of 7 years for the Chief Justice; end the practice of selecting a Chief Justice on the basis of seniority on the bench; transfer the selection of a Chief Justice to politicians; and allow politicians to select a Chief Justice from outside the list of Supreme Court Justices. Finally, if this highly politicized Court did in fact decide against the government, a simple majority of the Knesset (61 out of the 120 MKs, which is always attainable by the government coalition) could override its decision. As a result, the governing coalition essentially would have no limit whatsoever to its power to achieve its objectives. The Coalition’s majority depends on the support of the ultra-Orthodox parties, which forcefully push for “reforms” that:

The religious parties who dominate the government’s agenda in this regard desire to remove the Court’s judicial review, enabling the passage of legislation and policies that would secure ultra-Orthodox privileges that have been declared unconstitutional by the Court in the past. These groups may not be seeking to emulate the emasculation of judiciaries in Hungary, Poland and Venezuela, but their zeal has blinded them to the dangers of the demise of the courts as a protector of freedom from the will of transient majorities. They do not recognize the danger they might be causing to themselves if a strongly secularist government ever took control in Israel.

The proponents of the “reform” point to the US as a model, but in doing so, overlook several key points about the US judicial system that render such a comparison invalid.

First, Israel is a unitary state, in which the Knesset can do anything it chooses. In North America, there are independent state governments and judiciaries which can protect human rights even when the US Supreme Court does not. There are three branches of government and two houses of Congress. Israel, a small country, has no such checks to ensure the protection of minority rights against a tyranny of the majority.

Second, the U.S. Congress itself has no power to declare or abolish constitutional rights. This Israeli government is claiming just that power to grant special rights to the Ultra-Orthodox, and deny them to other streams of Judaism or secular Israelis, such as exemption from the mandatory draft or from core-curricular studies in state funded schools.

Third, the US has no judicial override mechanism other than amending the Constitution, which requires a 2/3 vote in both houses of Congress and then ratification by 38 States. There is no protection at all against legislative overreach in Minister Levin’s proposals. Nor is there is any tradition of respect for the courts, as in Canada, that would restrain a Knesset majority of the kind we have now.

This is an existential crisis. We need to raise our voices and ensure that Israel remains true to its founding ideals of democracy, equality, pluralism, and freedom. These ideals are enshrined in the Israeli Declaration of Independence, which has been a beacon of hope to all of World Jewry.

We must speak up, as the prophet urges us: For the sake of Zion I shall not remain silent! [Isaiah 62:1]

About the Author
Peter Buchsbaum is a graduate of Cornell University and Harvard Law School. He clerked for Joseph Weintraub, Chief Justice of NJ and served as a Judge of the NJ Superior Court from 2004 to 2013 after a career as prominent municipal land use lawyer. Peter has been listed in Who's Who in America for over 25 years. Today, he sits on the WUPJ North American Advisory Board and Co-chairs its Legacy Committee Chairs. He has been an officer of Har Sinai Temple in Pennington, NJ; and he is a co-founder of J-PLAN (the Jewish Pluralism Legal Action Network), which advocates for marriage equality in Israel.
Related Topics
Related Posts
Peter Buchsbaum