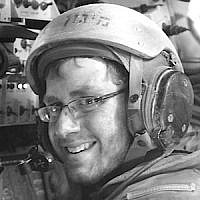 The Blogs
Yonah Budow
Apply for a Blog
Advertisement
Please note that the posts on The Blogs are contributed by third parties. The opinions, facts and any media content in them are presented solely by the authors, and neither The Times of Israel nor its partners assume any responsibility for them. Please contact us in case of abuse. In case of abuse,
Report this post.

I would like to write this as a response to the article written by my dear friend, Noah Abramowitz regarding the flag parade that takes place on Yom Yerushalayim. Noah argues that yeshiva and seminary students should not participate in this event, due to its alleged association with right wing radicals affiliated with Kahanist philosophy, and yeshiva and seminary students should therefore distance themselves from the event, and celebrate Yom Yerushalayim elsewhere. I would like to suggest in this following argument the contrary — that the educators of the religious Zionist institutions that hold Eretz Yisrael dear to them should encourage their students to participate in the flag parade through the streets of the united Jerusalem, and this could be potentially a great public display of Kiddush Hashem, if approached with the correct attitude.

Before I start my argument — the following obvious statement must be made clear — any radical, violent behavior of radical right wing nature to me is absolutely detestable. Grown adults and teenagers chanting “mavet la’aravim,” or any other verbal or physical violence or display of hatred towards Arabs is such a childish and pathetic display of complete lack of genuine Torah values and sensitivity. I agree, it is a colossal Chillul Hashem. These foolish and childish behaviors must be combated and protested — and this is exactly why I believe we should encourage the best of our students to participate in the parade.

This is not what the parade is about. The parade is not about hatred, provocation or incitement. The parade is about our display of love and gratitude to the almighty for uniting our holy city under Jewish control, and our ability to govern every inch of our holy land. It is an effort to deepen our connection to the land, especially in the places that are inhabited (mostly) by non-Jews. We pursue to love every inch of the land, we want to control every inch of our land, even the ones that are inhabited by our neighbors. And that isn’t racist. I am not suggesting a solution the the problem with the Arab population, but simply stating a Jewish value — we believe that part of the concept of “Tzipiyah Le’yeshua” is our yearning and desire to the land itself, as Rabbi Judah Halevi beautifully states at the end of the Kuzari: “Man’s love and yearning for the Holy Land help speed the fulfillment and realization of the awaited promise, as it is said, ‘you will rise and have compassion on Zion, when its time to be favored will come, at the appointed time; For your servants have cherished her stones, and favored her dust’ (Ps. 102-14,15) This means that Jerusalem will be rebuilt only when Jewry yearns for it to the extent that even its stones and dust are precious to us” (Kuzari, end of 5th essay)

This statement emphasizes the connection that we should have to our land, down to its every inch. Not as a provocation, not as an obnoxious political scheme, but as a statement and expression of our love and our yearning to the ultimate redemption.

Enough philosophy — let’s get more practical. It is tragic that anyone who is identified as right wing politically be automatically deemed by the general public as a mindless bigot. By boycotting the parade because a number of thugs with low, childish political agendas are participating as well would give even more strength to that misconception. We need to try and debunk this illusion, by deeply understanding the value of Eretz Yisrael in the Torah, and expressing that in the streets of Yerushalayim, by changing the identity of the parade from a podium of the mindless right wing extremists to the expression of the genuinely idealistic, Zionist, moral, Torah and Eretz Yisrael loving population. In time it could really become one of the greater displays of Kiddush Shem Shamayim in public. It could show the world how the Zionist movement is not about occupation and oppression, rather the return of God’s nation to its ancestral homeland, in order to build a society revolving around eternal values of truth and justice, and that their youth proudly celebrate their values and heritage in the streets on the day commemorating a significant landmark in their redemption process.

That’s what I dream of, and it’s true that it may not happen this year or next, it’s a long process of education and values. Just like the redemption, it comes little by little. But I’m confident that we’ll make it. I believe this approach is a bit more long and difficult than merely boycotting the parade altogether. But great things take time and strength. Time, strength, perseverance and Bitachon in Hakadosh Baruch Hu. That’s what being a religious Zionist is all about.

About the Author
Yonah Budow is an American born, Israeli raised Student in the Hesder Program of Yeshivat Hakotel and Herzog College. Served as a tank Gunner in 401st brigade of Cheil Hashiryon, currently serving as a Madrich in the overseas program at Yeshivat Hakotel.
Related Topics
Related Posts
Comments