Finding a really good book is one of the sweet pleasures of life. 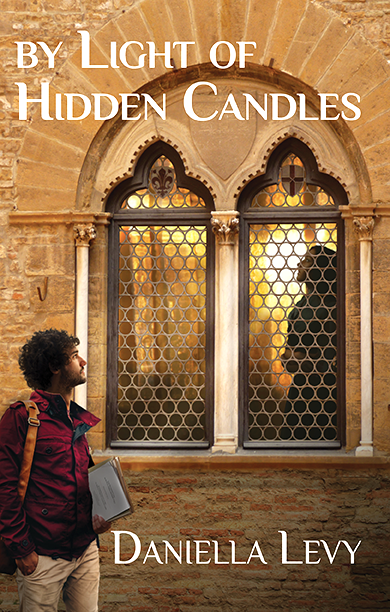 Daniella Levy’s first novel, By Light of Hidden Candles, is by turns a troubling love story, a glimpse into two related religions and their practices, a mystery, a study in the tragedy of our brothers and sisters hidden in the world of the anusim (forcibly converted Jews), a romp through five hundred years of history.

My favorite thing about Ms. Levy’s writing is her ease with dialogue. I feel that I know her characters. I can see them in conversation, and I care about them. I wanted so much for their individual and their collective stories to work out, the way you do when you hear a friend’s story. There were so many ways for it to go… and I wanted all of my peeps to fare well. Of course, life doesn’t always work out that way…

Listening to an interview of the writer (by her husband, Rabbi Eitan Levy), I heard something that made my eyes roll. I should not have been surprised: we live in The Age of the Protest.

Apparently, both Christian and Jewish readers (some of each, not all) expected Ms. Levy to cater to their views on how relationships between Jews and Christians should be written. My understanding, through at least fifty years as an expert reader, is that an author’s job is not to make you happy. That may in fact happen… but her job is to make you think. To challenge. To help you grow. At least, this is what my favorite books have done. They also may be entertaining. But the best novels have helped me, through their study of the human condition, to see my fellow human in more detail, to appreciate his struggles, to make us more real to each other.

Not only do Alma, Manuel and Míriam come alive on the page (as do all of the supporting cast of their half-century and transcontinental story), one is offered the opportunity to respect them and their viewpoints and wrestling-matches with their beliefs. The young protagonists share their often acerbic commentaries with each other, and with the reader; these people authentically speak with the unguarded opinion of young people everywhere. The rabbis and priests in the story are all fully-drawn and believable; there are no glib religious caricatures here.

The leitmotif of intermarriage is explored fully, from those who do and are shunned, to those who don’t and must bear the heartache of martyrdom for the sake of a greater good. Each position is given its moment to be explored and felt from inside. While I (and clearly the author) have strong views on the subject, I feel enriched by the opportunity to “walk around in the other fellow’s moccasins” a while. Understanding another’s viewpoint doesn’t threaten my own, but it makes me more compassionate.

A bonus: If you love stories about hashgacha pratit — the hidden hand of God, cv”l, moving things into place behind the scenes — you will enjoy several subtle references woven throughout the book, as many things “just happen” at exactly the right moment to guide the unfolding of the story.

Another bonus: the loving care in the editing and publication by Yael Shahar and Don Radlauer of Kasva Press has resulted in a beautiful, nearly-flawless book. I recommend trying to get on their very tight list, if you are a writer who wants a very beautiful finished product.

You can read more to intrigue about this excellent story at Daniella Levy. I recommend it!

About the Author
After serving in the US military, Ruti Eastman (aka Ruti Mizrachi) married her hero, homeschooled four sons, and intermittently worked in the field of education over a span of 30 years. She has worked in radio, has played in several bands, and teaches harmonica and percussion. Ruti and her family made aliyah in 2007. She currently maintains two blogs, one about Israel, called “Ki Yachol Nuchal!” and the other about general topics such as family, childrearing, marriage, and family history, called “Never Ruthless." Ruti Eastman has published two books of essays on the above topics, both available on Amazon.
Comments
Advertisement