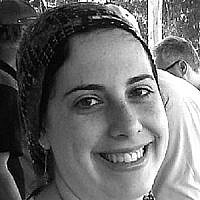 The Blogs
Esther Cohney
Apply for a Blog
Advertisement
Please note that the posts on The Blogs are contributed by third parties. The opinions, facts and any media content in them are presented solely by the authors, and neither The Times of Israel nor its partners assume any responsibility for them. Please contact us in case of abuse. In case of abuse,
Report this post.

Har Nof has always been my shelter; my safe haven. I spent my seminary year there and learned to live on my own. It was the first time I was away from my childhood home for an extended period of time, and I began to discover who I was and what I wanted from life.  I grew up and put down my adult roots.

I returned to Har Nof a few years later, shortly after my wedding. It was a comfort to return to a familiar place after a 15 hour long Aliyah flight. We arrived at our first apartment, dead tired, and I noticed two things on my front door that reminded me of the kindness of the people surrounding me.  First, my husband had put up one of those glass nameplates, signifying this was really our home. The second was that the neighbors we had not yet met left a cup of detergent for our washing and Davening times on a post-it note.

Har Nof was where the great seminary teachers and Rabbis lived. It is home to the Neve and Shearim learning programs, as well as several men’s Yeshivos, where so many people from the previous and current generations strengthened their foundation for Judaism and their lives. Har Nof has the most beautiful sunsets and the best inter-connected buildings.

Recently, my Har Nof was broken. After so many attacks against our people, two people had the sick idea to butcher innocents during prayer. They traumatized a nation and neighborhood, and shook the security of its beloved citizens.

I couldn’t pray, I couldn’t yet find meaning or think of anything to change. I could not move past what happened and how brokenhearted, shocked, and angry I felt. I tried to understand how our people face horrible blows week after week, and still move forward. What happens to people when they are struck with pain and hatred on a constant basis? I went along, put some smiles on my face, but it didn’t help. Mostly, I just couldn’t feel anything. My heart was trying to protect itself.

I later discovered that a colleague was present in the brutal attack in my Har Nof. The evil men entered the Shul, where he prayed every day for 11 years, to murder. He hid until he couldn’t any longer; and thankfully, the men finally ran out of bullets. He picked up a table to defend himself, and managed to run.

I listened to the recording of his account twice, trying to grasp at where his strength came from. He repeated that he was not traumatized, just pained over the loss of wonderful human beings. He realized it wasn’t his time, and that he simply did not have control over these things. He just had to keep going. What he would work on was what he could control-his actions and his life. I heard his message then, and I slowly try to internalize its meaning. I try to relinquish my belief that I do have control over the insane world we live in, and appreciate the little I can do.

Rebbetzin Tzipporah Heller, one of the great Neve educators and community role models, who breathes wisdom through her every word, spoke later on and said hardening our hearts is a defense mechanism, but is essentially cruel. We are meant to open our hearts and deal with the pain, slowly and sensitively. She mentioned how strong we are, as individuals and as a people and how we must feel the pain and grow past it.

So here I am a month later. I’m feeling. I’m showing love to others in my world. I’m visiting my old neighbors in Har Nof confidently. I go to comedy shows and clothing swaps with friends. I celebrate Chanuka, where we fought and prevailed against our enemies, and managed to bring light to our people. I teach my sons the words to Maoz Tzur, where we praise G-d for our survival and strength.

About the Author
Esther Cohney was raised in a multi-cultured home in sunny Los Angeles as a 90s child with her heart on her sleeve. She loves writing, travelling, working with people, and asking lots of questions. She is determined to accomplish as much as possible in life, while enjoying every darn minute of it.
Comments