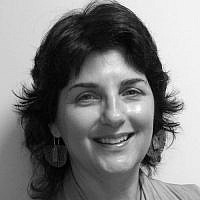 The Blogs
Brynn Olenberg Sugarman
Apply for a Blog
Advertisement
Please note that the posts on The Blogs are contributed by third parties. The opinions, facts and any media content in them are presented solely by the authors, and neither The Times of Israel nor its partners assume any responsibility for them. Please contact us in case of abuse. In case of abuse,
Report this post.

One-hundred thousand people show up at Rabin Square to protest unequal surrogacy treatment between the LGBT community and the rest of the population. And right they should, if a promise was made and, in the name of coalition politics, then reneged on.

But let’s dig a little deeper into the issue of surrogacy itself, regardless of if the aspiring parents are straight, gay, male or female. In a world where thousands of babies and children need a home, does surrogacy make any sense? While I agree that both pregnancy and birth are wondrous processes (two of my “hats” from the past are childbirth educator and doula,) only the surrogate experiences it, not the sperm donor/egg donor/financer.

So, what’s it all about? Why go through surrogacy contortions when there is the option of adoption? The sad truth is that hundreds of millions of babies and children in this world are desperate for homes.

As already stated, it can’t be for the pregnancy/birth experience, since that remains the surrogate’s sole domain. So, what exactly differentiates surrogacy from adoption, that one would demand the right to choose that over adoption — and governmental assistance in achieving it?

There is only one possible answer: one’s fondness for one’s own genes, and the “delusion of control.” MY sperm. Or MY egg. And: this baby is going to be something else if it comes from ME.

A whole lot of ego.

As the mother of both “birth sons” and a daughter who was adopted (Vietnam,) I can honestly say that the love that I have for all my children is equal. My eggs and my husband’s sperm are not one iota superior to the egg and sperm which went into creating my daughter.

And now a family anecdote which shoots down the “delusion of control.” One of my sons has Crohn’s disease. When my other son discovered that he has a metabolic issue, he turned to me and said “Aren’t you glad that you adopted the third?!”

There are also ethical/abuse questions regarding surrogacy. What kind of woman is willing to do it? As stated, pregnancy/birth is beautiful, but stressful and not without risk. Let’s face it, other than a close friend or relative, only a woman in desperate financial straits would be willing to “rent her womb.” No wonder the developing world has been utilized for this purpose – and there is no reason to believe that a surrogate acquired in Israel would be any different.

It is true that, like surrogacy, adoption can be expensive. What a pity, considering that our tradition considers it a tremendous mitzvah to care for the orphan.

So, what I’d like to see instead of a surrogacy demonstration is a rally on behalf of adoption advocacy:  governmental financial incentives and adoption support for ALL members of society.

About the Author
Brynn Olenberg Sugarman was born in New York City. She graduated from SUNY Binghamton with a BA in Creative Writing and from the Hebrew University in Jerusalem with an MA in English Literature. She is the author of "Rebecca's Journey Home," an award-winning children's book. She is also the author of "Midnight at the Taj Mahal," and "Speechless." Brynn lives in Tel Aviv with her husband, Dov, where she enjoys writing and painting. She is passionate about Israel advocacy, travel, vegetarianism, animal welfare, the environment, archaeology, and children's literature, and is fascinated by the notion of time travel.
Comments