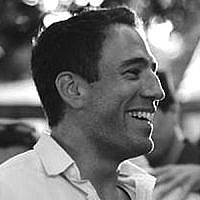 The Blogs
Michael Snape
Apply for a Blog
Advertisement
Please note that the posts on The Blogs are contributed by third parties. The opinions, facts and any media content in them are presented solely by the authors, and neither The Times of Israel nor its partners assume any responsibility for them. Please contact us in case of abuse. In case of abuse,
Report this post.

The ink hasn’t even dried on the Iranian nuclear agreement, and already European governments are tripping over one another to get their share of the billions of dollars that are going to be pumping in and out of Iran.

The “Death to Great Britain” graffiti is being furiously scrubbed off as Foreign Secretary Philip Hammond hastily re-establishes the embassy, pathetically paying for its refurbishment after it was ransacked by hate-crazed mobs.

The Ayatollah has barely pressed the “Tweet” icon, eyes gleaming, as he sends another aggressive anti-American message while the White House enlists more celebrities to appease the people.

The Iranian hangman is just folding up his rope and scaffold after his 744th hanging this year (in this case, of a man convicted of homosexuality), as the EU sees no irony in joyously embracing Iran while furiously condemning Israel for perceived human rights abuses at every opportunity.

This very moment, Hassan Nasrallah is putting down the phone with his Iranian minders, after sending his wish list of the most advanced weaponry available in order to bring closer the mutual dream of destroying Israel, or at least killing as many Israelis as possible.

Bashar al-Assad can finally relax in his overstuffed palace chair. Iran, squeezed by sanctions, was starting to waver in their commitment to keeping his regime afloat. Just think of how many barrel bombs can be dropped on civilians now!

Truly, kudos to Khamenei, Nasrallah and co. They stay on message. They do not tone down their rhetoric. The US is still the Great Satan and Israel the little Satan. Both must be destroyed. Not as a metaphor, and not “someday”. As soon as possible, starting from today.

They shout their messages from the rooftops, while the world debates what an “acceptable” number of centrifuges is. Will it be 8,000 or 10,000?

All the while, Hezbollah, Hamas and Islamic Jihad are gleefully re-arming with hundreds of thousands of the latest rockets and missiles, re-establishing their overseas-based units, refurbishing their bunkers, and perhaps most dangerously, re-educating another generation to hate and to destroy.

While the focus has shifted to the technical details of the nuclear agreement, we’ve lost sight of the bigger picture. How can we ever be dealing with Iran in the first place? The epicenter of global unrest, of jihad and state-sponsored terrorism. An aggressively expansionist regime, one that also happens to be among the world’s worst human rights abusers.

The whole concept of the deal is crazy. Forget the nukes! How did we go from effective sanctions, with noble goals of freedom for the Iranian people and peace in the region, to giving in, giving up and giving back? To rewarding dishonesty, to displaying almost criminal good faith, to just plain bad negotiating?

Blinded by a combination of naivety and dollar signs, all of this is pushed aside as a weak nuclear agreement is signed and all is forgiven. Billions of dollars are about to pour into Iran, for them to spend as they wish.

And we know what they wish. They’ve told us.

Obviously we can’t forget about the Iranian nukes. In a maximum of 15 years’ time, and possibly a lot less, these will be a reality. Iran will have the clout of a nuclear-armed state, a state that doesn’t make empty threats. We’re showing them the red carpet, as red-faced we apologize and grovel and open up a Middle East arms race.

In the next (inevitable) war with Hamas and Hezbollah, it’s going to be Israeli citizens in the cross-hairs of the Iranian guided missiles.

Today Israel, tomorrow the rest of the free world. It’s a matter of time.

And after all that, we’ll have the deal makers to thank.