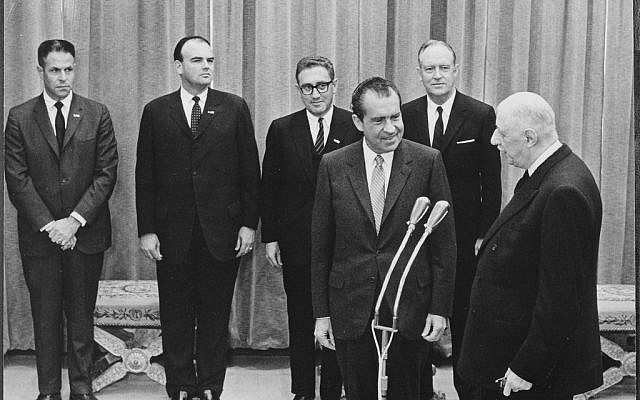 Gérad Araud is a former French Ambassador to Israël, UN and USA, trustee to ICGroup, senior adviser to ASG, dist. fellow to AtlanticCouncil at http://Senseagency.fr. He has published a biography of Henry Kissinger (éditions Tallandier), former Secretary of State of Richard Nixon, Gérald Ford (1973-1977) and National Security Advisor (1969-1973).

Could you remind us of the most significant encounters you have had with Henry Kissinger?
Gérard Araud: Throughout my stay in the United States, as Permanent Representative to the United Nations then as Ambassador in Washington, I had the opportunity to share breakfasts or one-on-one lunches with Kissinger. We were able to exchange views on a large number of foreign policy subjects,

What relationship did he have with France in the 1970s, as Nixon’s national security advisor ?
GA: Unlike the Department of State, Kissinger, far from being hostile to General de Gaulle, admires and sees in him a head of state who shares his pessimistic view of history. After the latter’s departure from power, in 1973-74 he clashed with Michel Jobert, Pompidou’s last foreign minister, who opposed what he saw as an attempt to reassert American leadership in Europe. It will be the shock of two immense egos. However, Kissinger retains esteem for France,

Do you confirm that the Paris prosecutor was seized of a report for “intelligence with a foreign power“, for working with NSO, the company that created Pegasus ?
GA: I have nothing to do with those facts.

You say that everyone is jostling to meet him: Putin, Xi Jinping, Modi or Macron, how can you explain this fascination after forty years ?
GA: All heads of state and government have continued to receive Kissinger because he provides them with a clear and cold analysis of international relations, without any ideology. At a time when we are witnessing the return of the rivalry of powers, in a world which is more than ever a jungle, its realism seems to many to be the best analytical framework for defining a foreign policy. Kissinger is able to summarize the most complex problem in a few sentences and identify the essentials of the incidental,

After offering sarcastic response to Antony Blinken tweet, what is your reaction to the submarine crisis?
GA: The Australian submarine crisis is a bad blow to the industrial and strategic interests of France by its allies. Lessons must be drawn from this, in particular with regard to the posture to be adopted vis-à-vis China in the Indo-Pacific zone, where France has particular interests linked to the territories it holds there. Should it join the military coalition that the United States is putting in place or should it retain a special position?

We are deeply moved… https://t.co/Bp539WNSUu

What are the diplomatic challenges for France in 2022 ?
GA: 2022 will be the year of presidential and legislative elections in France; the first semester of 2022 will also be that of the French presidency of the EU. These events will dominate French news until the summer.