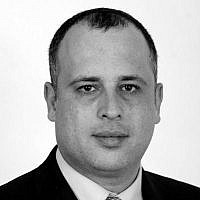 The Blogs
Hilik Bar
Apply for a Blog
Advertisement
Please note that the posts on The Blogs are contributed by third parties. The opinions, facts and any media content in them are presented solely by the authors, and neither The Times of Israel nor its partners assume any responsibility for them. Please contact us in case of abuse. In case of abuse,
Report this post.

On the 27th of this past July, not long ago, I launched my diplomatic Plan. A significant section of the plan focused on Jerusalem, which I have described as being on the verge of a third Intifada. Some on the right laughed and ridiculed. I did not write that in order to defy, scare, or criticize. I simply sought to alert and try to find solutions which could somewhat address the situation in East Jerusalem, before the horrific violence taking place there now occurred, and not only after the fact, as we are so fond of doing in Israel. We should see reality as it is: the roots of the current escalation are a result of the radicalization in East Jerusalem, of the escalation at the Temple Mount and in a broader sense of the misguided conflict management of the Netanyahu government; Netanyahu’s policy negates any diplomatic horizon which could accompany – not replace – the force and more force which we use.

The radicalization in East Jerusalem is not only the result of organized efforts by Hamas and Islamic Jihad. It also stems from the absence of an Israeli decision regarding the future of East Jerusalem and its inhabitants.

The overall situation in most of East Jerusalem’s Arab neighborhoods mirrors the official status of their inhabitants: permanent resident — less than a citizen and more than a foreign worker – not here and not there.

Prime Minister Netanyahu and Public Security Minister Erdan are confronting the escalation mostly by increasing policing and punitive measures. These of course are important measures which should be part of the tools Israel employs. But they cannot be the only tools as they do not get to the problem’s roots and therefore cannot fully address it.

As a Jerusalemite, who lives the city and its complexity, and as a former member of the Jerusalem City Council who knows a bit about life in East Jerusalem, I ask what can be done to calm the situation and neutralize the fragile powder keg on which Jerusalem is standing. Are we doomed to experience yet another Intifada? Four strategic directions deserve serious attention.

First, increasing policing is a necessary move, but Netanyahu and Erdan send hundreds of policemen into the midst of the Arab neighborhoods of East Jerusalem and thus often strengthen radicalization and hostility. Stationing police forces primarily across the seam zone in the city and less in the heart of the Arab neighborhoods would be preferable — while in parallel increasing focused military, intelligence and policing activity targeting Hamas and Islamic Jihad cells across East Jerusalem.

Second, we should implement parts of the Barkat Plan for transferring responsibility over the provision of municipal services to the Arab neighborhoods beyond the separation barrier to the Civil Administration or to the Palestinian Authority. The neglect in the areas of sanitation, infrastructure, education and welfare does not help to curb the radicalization and escalation in East Jerusalem and in any case in the bulk of these areas the Jerusalem municipality fails to sustainably and adequately provide services.

Third, we should examine courageously which of the Arab neighborhoods on the outskirts of East Jerusalem would not remain in any future diplomatic scenario under Israeli sovereignty – neighborhoods which we neither want nor need under our sovereignty – and transfer them to the managerial responsibility of the Palestinian Authority already now. Not sovereignty but civic and operational responsibility. Why? Primarily because the facts on the ground and the testimony of the heads of the IDF and the Israel Police demonstrate that precisely fewer attacks against Israelis are launched from areas around East Jerusalem in which the Palestinian Authority operates. In fact, more attacks come from similar areas which are under the civil control of Israel. Incidentally, in many of the Arab neighborhoods of East Jerusalem the Israel police operate only when Israeli citizens are harmed and only rarely in conflicts between East Jerusalemites, thus worsening the lack of trust of the residents in the Israeli government and its police forces.

Fourth, in order to lower the tensions at the Temple Mount we should maintain the status quo. Entry of Jews to the Temple Mount is possible today and takes place regularly, as it should. For it to generate less tension and violence, additional policing and punishments will not suffice. Israel should cooperate with Muslim authorities who seek to reduce violent incidents at the site because they harm its sanctity and historical importance. Israel should deepen its cooperation with the Waqf and partner with Muslim bodies operating at the site to enforce order among the Muslim population. Some of them have a real interest in doing so and would become more effective as their efforts yield results.

The state of Israel must return to its senses. The rising violence in East Jerusalem is a clear sign of the abject failure Netanyahu’s policy of exclusive reliance on force. Force is important, and deterrence certainly is important, but in a place that is as complex and sensitive as Jerusalem they are insufficient. One cannot expect more severe punishments and a doubling the number of cement road barriers to resolve all of the problems. One cannot deal only with the symptoms of the problems. The smart precision weapons our soldiers and police officers carry should be matched by a smart and precise governmental policy. Israel needs a leadership that understands the complexity of life in East Jerusalem because the next Intifada is just around the corner – its seeds are already here.

About the Author
MK Hilik Bar is General Secretary of the Labor Party, Deputy Speaker of the Knesset and co-chairperson of the Knesset Caucus for Jerusalem.
Related Topics
Related Posts
Hilik Bar
Comments