For Parshat Korah, the Torah portion read in synagogue this Shabbat.

My wife Miriam and I were invited to create the official art exhibition in celebration of Miami’s Centennial.  One of our artworks was “Four Wings of America.”  We placed rope tzitzit (ritual fringes) on the coast of Maine, Florida, the wall separating San Diego from Tijuana, and at an Indian reservation at the end of the Olympia Peninsula in the state of Washington.

Since the biblical word for corners (kanfot) is also the word for wings, we approached American Airlines, in the wing business, to sponsor our artwork.  I made a presentation in the airline’s board room.  I placed on the long board room table a rope tzitzit with one blue strand as described in the Torah.  I wore a tallit shawl with tzitzit flowing out of its four corners.  After explaining how the blue strand links sky to  sea,  the American Airlines vice president enthusiastically responded by saying, “What a great spiritual metaphor.  The tzitzit with the blue strand connected to all four corners of America will lift the entire USA skyward.”

American Airlines sponsored our project and flew us to the four corners of America.  Below is a photo taken at the NW corner in the state of Washington.  To see the photos of all four corners and Torah Tweet texts at:

Speak to the Israelites and say to them that they shall make themselves tzitzit on the corner wings of their garments for all generations. And they shall include in the tzitzit of each corner wing a thread of sky-blue wool…. I am God your Lord who brought you out of Egypt. (Numbers 15:38, 41)

Korah son of Izhar son of Kehat son of Levi began a rebellion along with Datan and Aviram sons of Eliav. (Numbers 16:1, 12-13) 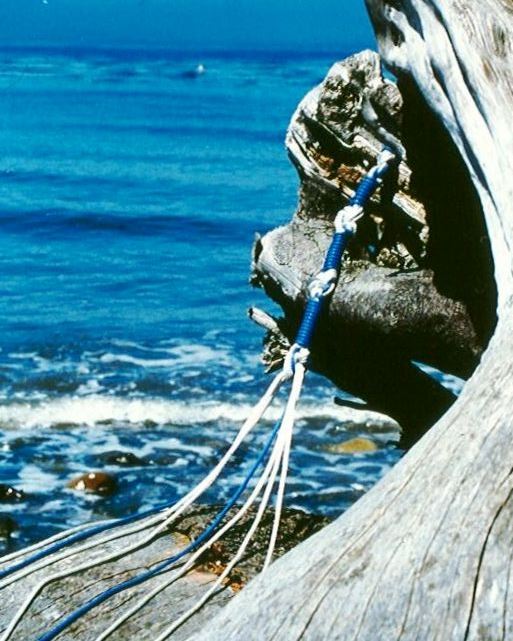 Moses replied that one is obligated to tie only a single sky-blue thread among 3 white ones. The color of the tallit is irrelevant.

An all sky-blue tallit symbolizes a totally spiritual life separated from the mundane.

He will ingather the dispersed ones of Judah from the four corner wings [kanfot] of the earth. (Isaiah 11:12).

When the City of Miami asked us to create the official artwork for its centennial, we proposed placing tzitzit on the 4 corners of America.

American Airlines, the largest US corporation in the wing business, agreed to sponsor our “Four Wings of America” project.

We flew to Maine where we placed a large rope tzitzit with a sky-blue strand on barnacle-encrusted boulders at the Atlantic Ocean.

We attached a tzitzit to a tree on the beach of a balmy Florida bay where the blue of the sky colored the sea water.

On the Pacific coast, a Mexican boy watched the tzitzit shuddering in the wind hanging from the wall separating San Diego from Tijuana.

From Seattle, we drove to Neah Bay, an Indian reservation at the end of the Olympia Peninsula in Washington State to place the 4th tzitzit.