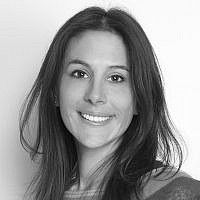 The Blogs
Erica Lyons
Apply for a Blog
Advertisement
Please note that the posts on The Blogs are contributed by third parties. The opinions, facts and any media content in them are presented solely by the authors, and neither The Times of Israel nor its partners assume any responsibility for them. Please contact us in case of abuse. In case of abuse,
Report this post.

Since the start of Operation Protective Edge, my flippant response to questions about my safety in Israel was, “I am far safer here than I would be in Paris.”

Last night it was announced that Delta Air Lines Tel Aviv-bound Flight 468 from New York was diverted to Paris because of concerns over safety. I thought for a moment that I was reading The Onion.

As it turns out, however, as the war escalates, so does the threat in France. My reference to Paris is not so tongue-in-cheek.

I check in with friends in France regularly. The war rages here yet they are on the battlefront. Missiles can’t reach them but madness has.

My heart is breaking. Theirs are already broken. It is a nightmarish flashback to the 1930s and 1940s but it is not in sepia. Eight synagogues are attacked and another is nearly burned, saved, my friends tell me, only by the protection of a private defense Jewish organization. Their businesses too burn at the hands of this violent mob. Chants of ‘Death to Israel’ fill the streets. Broken glass falls to the floor.

Snippets of conversation play in my head. One conversation in particular haunts me. I hear it over and over again as I wind slowly through the morning’s sunlight Jerusalem streets. My friend explains how she is afraid now to go out, her back aches from the stress. Her nine-year old pleads with her to take him outside. But she feels debilitated by the pain and suggests they stay in.

“In the end I took him out,” she says. “I explained that no one NO ONE should make him afraid to walk freely and live his life because of his religion. This is not my country. These are not the values my grandfathers fought for.”

But they are afraid and rightfully so. What should be and the reality of what is certainly do not match.

Today, however, they will stay inside. The pro-Gaza rally, approved by the government, will come within 100 meters of her home.

We discuss how the lines between realism and pessimism have blurred for their community.

She braces herself and her children for the next attack.

About the Author
Erica Lyons is the founder and editor-in-chief of Asian Jewish Life. She and her family have called Hong Kong home since 2002.
Comments