Standing on the tarmac at Ben-Gurion Airport after the most recent Nefesh B’Nefesh flight, a reporter from Arutz Sheva asked the new immigrants to describe what they were feeling. I edited the inspiring video and posted it on my Facebook page, where it received thousands of views and was shared hundreds of times. The comments included “Welcome home” messages, and some back and forth by some of the people who appeared in the video and their friends.

And then, suddenly, the comments took on a very different tone:

Mohsina Mia: “Whose home. You are thieves.”

William Hilo: “More land thieves are coming to the stolen lands of Palestine.” 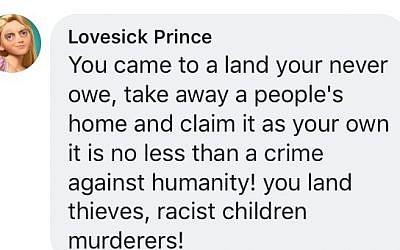 This was just a sampling of the huge number of comments that came flooding in from “Free Palestine” activists. Engaging with them for just a few minutes made it clear that these activists do not care one bit about “the plight of the Palestinians,” and their issues have nothing to do with the West Bank and Gaza, the so-called settlements, or anything related to the results of the Six Day War. No, they reject the existence of Israel from the get-go, believing that there should not be any Jewish state within the borders of “Palestine.”

This became clearer as more detailed comments began to flow in the thread.

Ivana Maria: “More illegal settlers. There to steal land and homes of the Palestinian people! You people are thieves, baby killers, and murderers!”

Monia Barbirou: “A bunch of land stealers and baby murderers. Go back where you came from. This is Palestine.”

Alex Qurash: “Zionists stealing Palestinians lands, in 1920s they were only 7.5 percent of the population and the rest were Palestinians, now they brought 3 million Russians and 2 million from what called poor East Europe countries and one million from Africa and some Europeans and Americans.”

Derek Andrew Hands: “I wouldn’t wish you racist settler colonisers on my worse enemy. You get stipends to go squat on stolen Palestinian land. I knew apartheid was wrong aged 6 years old. There is no excuse for these adults to still so easily be indoctrinated. Free Palestine once and for all.” 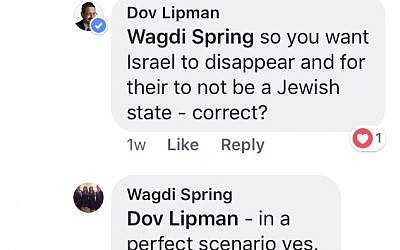 I tried to reply to every comment, focusing on facts and realities without losing my cool, at times relying on humor as well. My answers led many to step it up a notch, forcing Facebook to hide their comments because of the curses and threats accompanying them.

And then, most of them either got tired of dealing with my throwing facts and figures their way, or they abruptly ended the thread with comments such as:

Bernice Wade: “You are a liar.”

Noha Fayad: “Please save your lies for someone else.”

Summer Omar: “I’m no longer going to entertain your annoying rambling. You are a joke.”

Mohsina Mia: “Nonsense and you know. Go on believing in your lies.”

Derek Andrew Hands: “I guess you cannot have that much grey matter to work out the obvious if you are an indoctrinated to nothing simple Zionist.”

There were some, however, who simply could not hide their true intentions, which have nothing at all to do with the Land of Palestine and everything to do with the Jews:

Goaty Steve: “Such disgusting looking people, such $%^# look at the noses!…THE OVENS ARE AWAITING YOU!…ZYKOLN B FOR ISRAEL!”

Mark Contreras: “Notice how they all look like they have a mental condition”

Brian Grossman: “Look at their facial features. They all look retarded. They ain’t right. Terrible genes.” 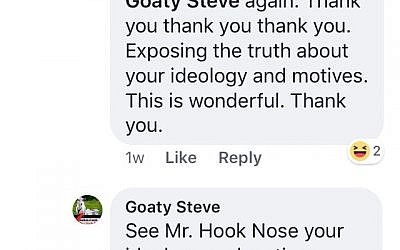 Classic anti-Semitism is alive and well, manifesting itself in the “Free Palestine” and BDS movements. We must be made aware of it, and commit to challenging these “activists” wherever they appear. The truth must be said: these are not politically liberal social activists, these are antisemites who hate the existence of Israel. We must be vigilant and willing to call a spade a spade, and by so doing expose their true motives and their debased, offensive, and reprehensible ideology.