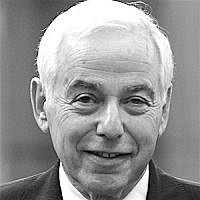 The Blogs
Richard Herman
Apply for a Blog
Please note that the posts on The Blogs are contributed by third parties. The opinions, facts and any media content in them are presented solely by the authors, and neither The Times of Israel nor its partners assume any responsibility for them. Please contact us in case of abuse. In case of abuse,
Report this post.

Over several years, beginning with my initial year as Chancellor of the University of Illinois, I found considerable cause to engage with the particularly American concept of Free Speech as laid out in the First Amendment.  More than one hundred years of court decisions have underwritten nearly complete freedom of speech, encouraging Americans to hear once unpopular opinions which later won the day-from women’s suffrage, to race equality before the law, to birth control and many others.

My guiding principle became the 1927 concurring opinion of Justice Louis D. Brandeis in Whitney v. California who offered that the best answer to repugnant speech is “more speech, not enforced silence”. That this standard was particularly applicable at a public university was not lost on me. Some of the incidents that brought this to the fore included decisions by the U. Illinois student newspaper, namely the repeated publication of anti-Semitic statements and the republication of the Danish cartoons of Mohammed. As I contemplated weighing in on these kinds of issues, some asked me if I really wanted to get involved, since I was vocal in defense of free speech. I decided nonetheless in such instances to speak out to the community decrying these initiatives based on the idea that I had not relinquished my right of free speech by serving as Chancellor and that I had an obligation to speak out in particular on issues of religious and racial slurs.  My orientation was to sound the theme that simply because you have the right to do something does not mean it is always the right thing to do.

In several cases, alumni and others called wanting the university to adopt disciplinary measures. I refused on the basis of First Amendment logic and also because I believe university leaders serve under a sacred bond to promote free thought and expression on their campuses. But most importantly Brandeis’ hopes (and those of  Chief Justice Holmes) that good speech in the wake of bad speech would bring ideas to life guided my actions. Sure enough, letters were written to the student newspaper in these cases and robust debate and discussion ensued. Such dialogue and exchange were broadly educative for the campus community as a whole.  I was not alone in speaking out in this way on the need for campuses to respond to bad speech with good speech.  Other university leaders responded similarly.

But, to a great extent, with notable exceptions, this seems no longer the case and we are the poorer for it. The First Amendment seems to have been somewhat forgotten, especially when it comes to calling out those who abrogate the free speech of others, disrupt events, shut down speakers, and prevent assembly. Sometimes hecklers shut down presentations without any consequences; other times they force the withdrawal of tendered university invitations to speak. Again, exceptions exist and include for example UC Berkeley’s refusal to disinvite Bill Maher.

Much of this has come about as campus leaders have buckled to a chorus of voices demanding curtailment of expression on campus and the creation of so-called safe spaces particularly for those who feel endangered by free speech.  This forgets the importance of free speech in our society, both as broad constitutional guarantee and also as lifeblood of campuses as intellectual communities. How much better it would be if campus leaders instead developed strategies to encourage and to live constructively with greater and louder voices of dissent from all sides, including some they find offensive. Here the University of Chicago should be greatly praised for the recent letter by a dean to the incoming class which decries “trigger warnings”, cancelling invited speakers and noting that the University does “ not condone the creation of intellectual safe spaces where individuals can retreat from ideas and perspectives at odds with their own.” The link to the Brandeis decision and the need to avoid “enforced silence” is inescapable.  University leaders can and should speak in response to voices calling for curtailment of speech  calling them out for what they are, but they should also uphold and support the freedom of the larger conversation. The University of Chicago has done just that.

This brings me to a final point. Jews, and I am proudly one, have been living with the reality of free speech for a long time.  Free speech permits the statement and circulation of the worst canards against Jews, as it does against African Americans, women, gays, and others.  It does so in newspapers, in speech, and in other media prominent on campuses.  The spread of such nastiness is not without consequence.  Recent studies highlight the powerful perception by Jewish students on leading American campuses that they are targeted for the alleged failings of Israel in the Middle East and are exposed to anti-Semitic statements and claims, including their fitness for student government office.

In response to some of the worst speech and worst actions on campus, we often hear appropriate calls for greater inclusiveness, whether based on religion, race or sexual orientation.  But what strikes me as noticeably lacking is a willingness also to call out anti-Semitism and to offer good speech in response to bad speech about Jews.  The one notable exception is the recent University of California Board of Regents Report and Principles Against Intolerance, adopted unanimously in late March 2016, which calls on university leaders in that state to recognize anti-Semitism as a form of bigotry to be decried along with other forms of hatred and intolerance.

No doubt there are other standards and examples, but when swastikas appear on campuses or blatant anti-Semitism by individual faculty calls forth only banal generalities, I think we should start to worry. Most recently, UC Irvine, which has announced its commitment to implement the Regents’ Principles, handed out what has been called a “feckless punishment” to the local chapter of Students for Justice in Palestine for a violent demonstration that clearly violated university policy. No mention of anti-Semitism. Dartmouth’s bland reaction to a speaker who spouted vile anti-Semitic tropes is another example. The University of Tennessee at Knoxville is now under threat of lawsuit for its own vanilla  response to anti-Semitic claims made against Jews.  Alumni/ae are up in arms about events at Oberlin and other institutions.   The spread of anti-Semitism on campuses is worrying.

A decade ago, a dear colleague mentioned to me that he believed that on campus it was possible to be against, racial slurs, homophobia etc. but not against anti-Semitism. At the time I was not in accord, but I heard it again just a few days ago. My immigrant grandparents would have described the requirement as a “sha” moment, acting out a reflex from another time and place that Jews would be better off to stay quiet.

Sad.  I am unwilling to stay quiet and call on university leaders to speak out against anti-Semitism while underwriting free speech and to have the courage to say the word in offering good speech to counter bad.

About the Author
Senior Counselor for the Jewish United Fund/Federation of Metropolitan Chicago and member of Academic Engagement Network.
Comments