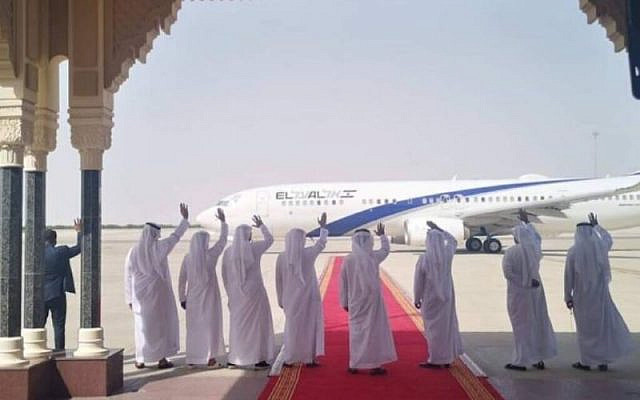 Netanyahu has succeeded in diverting the international community’s attention from the primary objective of resolving the Israel-Palestine conflict to the short-term goal of halting annexation. Europe and the Gulf states need to keep their eye on the ball.

Imagine that in the course of an altercation, one side takes a group of hostages.  The authorities condemn the criminal act but take no action to free the hostages. For more than half a century (yes, the older generation dies off but the offspring on both sides inherit their parents’ role of captors or captives), negotiations on the hostages’ release take place intermittently.  At times it seems as though they are close to concluding a deal, but each time the negotiations fail, and the standoff continues. Then, one day, the hostage holders threaten to start shooting the hostages, setting off alarms around the world. Voices emanate from every corner, warning that killing the hostages is not something that will pass without consequences. The captors start to get cold feet, but they are reluctant to back down and show that they are susceptible to pressure. And then someone decides that it’s easier to catch flies with honey, so they offer the captors a way out: Don’t kill the hostages, and we will welcome you back into society and shower you with gifts.  The captors jump at the offer, and the world applauds and embraces them for sparing the lives of the hostages. And what about the hostages, who are still being held in captivity? They are told to be grateful that they got to live another day and should cling to the hope that someday they may be freed.

There, dear reader, is an analogy that encapsulates the way the Israel-Palestine conflict has evolved in recent months. For decades, the international community has condemned Israel’s perpetuation of the occupation, its settlement enterprise on Palestinian lands, and its perpetration of human rights abuses as violations of international law. Those who support the two-state solution have worked to secure an end to the occupation and the establishment of a sovereign, independent Palestinian state along the June 4, 1967 lines, with minor land swaps to be determined through negotiations. The Arab League sought to promote this objective through the adoption of the Arab Peace Initiative (API), which offers Israel normalization with the Arab states in exchange for a resolution of the conflict that is in accordance with international legality and on the basis of land for peace. The international community formally adopted these principles with the passage of UNSC Resolution 2334 in December 2016.

A Step Too Far

Under Prime Minister Netanyahu’s leadership, however, the Israeli Government has spent the past decade struggling to reverse the trajectory of peace negotiations that would culminate in the creation of a viable Palestinian state. It has done so, inter alia, by changing the discourse through the repetition of contested opinions until they gain acceptance as “facts” and by expanding settlement in the occupied territories and then asserting that it would be inhumane to uproot their residents. These tactics align with the advancement of President Trump’s “vision” of the Middle East, but they failed to convince Europe and the Arab states, which continued to stand firm in calling for an end to the occupation and the realization of the two-state solution.

And then Netanyahu went one step too far. Emboldened by the release of the US “Peace to Prosperity” plan and encouraged by the unwavering support of the Trump administration he had enjoyed up till then, Netanyahu announced that he was going to annex the West Bank lands that the United States had unilaterally decided to allot Israel within the context of the Trump plan. In so doing, he clearly miscalculated, failing to correctly assess the reactions from Jordan, which called annexation nothing less than “an existential threat”; from Europe, which declared that it could not tolerate such a threat to the post-World War II rules-based world order; from the White House, where Jared Kushner fought tooth and nail against a move which he felt would erase the imprint he hoped to leave on the Middle East; and from the far-right settlers, who were unwilling to make do with anything less than annexation of all the territory between the Mediterranean Sea and the Jordan River.  Once he grasped the magnitude of his error, Netanyahu began to look for a way out that he could spin as an achievement, and the United States came to the rescue.

A Move in the Wrong Direction

Having already coopted the Gulf states into supporting the “Peace to Prosperity” plan and driven by the belief that money can buy you anything, Trump brokered a deal between the United Arab Emirates and Israel in exchange for Israel’s agreement to suspend (note “suspend” and not “abandon”) its annexation plans. It’s no surprise that Israel, the UAE, and the United States are trumpeting this as a “historic peace agreement.” From their point of view, Israel succeeded in breaking through the “normalization for peace” barrier established by the Arab League, the UAE forged a path to getting its hands on advanced US weaponry, and President Trump got to crown himself as a peacemaker in the eyes of his evangelical base. The question is: Who put the blinders on Europe?

As noted above, the international community has always considered Israeli settlements illegal but, prior to Israel’s threat to turn de facto annexation into de jure annexation, it had treated Israel with kid gloves. When Israel announced its intention to formalize annexation, however, the EU began work on an “options paper” with possible steps to be taken if it happens, among them a reexamination of the EU-Israel Association Agreement. Of course, based on past experience, there was no reason to believe that the EU would consider applying these steps should Netanyahu renege on his promise to annex and “merely” maintain Israel’s current level of violations of international law. Therefore, expectations were that if annexation was halted, it would be business as usual. But, lo and behold, the EU does appear to be making a move… in the wrong direction.

Eye on the Ball

Late last month, Foreign Minister Gabi Ashkenazi participated in an informal meeting of EU foreign ministers in Germany, where the possibility of resuming the annual high-profile meetings of the EU-Israel Association Council was raised. No such meeting has been held since July 2013, following the publication of the EU policy on labeling settlement products and the revision of its guidelines to exclude settlements in the occupied territories from any future agreements with Israel. Seven years later, the occupation stands firm and the settlements are booming, but now that Israel has pulled back the hand holding the official stamp it was about to put on its theft of Palestinian lands, Europe appears to think that Israel should be rewarded.

Even if we thought that the Gulf states and Europe truly believe that the way to end the occupation is by playing nice with Israel rather than playing hardball, it would be incumbent upon us to warn them that they are wrong.  Netanyahu believes in pushing the envelope and will go as far as he can. The annexation saga teaches us that when he’s reached the limit of what the world will tolerate, he backs down. Unfortunately, it also diverted the international community’s attention from the primary objective of resolving the Israel-Palestine conflict to the short-term goal of halting annexation. The world needs to keep its eye on the ball – ending the occupation. To that end, the Gulf states need to stand by the API and Europe needs to hold Israel at arm’s length until the hostages are freed.