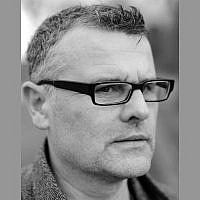 The Blogs
Bertin Sanders
Apply for a Blog
Please note that the posts on The Blogs are contributed by third parties. The opinions, facts and any media content in them are presented solely by the authors, and neither The Times of Israel nor its partners assume any responsibility for them. Please contact us in case of abuse. In case of abuse,
Report this post. 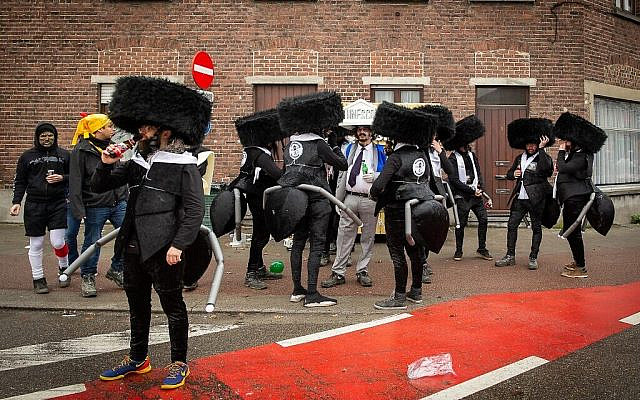 People dressed as ultra-Orthodox Jews/ants are seen before the start of the Aalst Carnival's on February 23, 2020, in Aalst, Belgium. (James Arthur Gekiere/AFP)

After I read The Times of Israel article on Aalst carnival, I felt that I must share my point of view with you, from Belgium, with shame and apologies.

As a Belgian citizen, I wish to apologize for my country, especially for the authorities and some politicians, about what has happened earlier this week and also last year, in the city of Aalst, at the so-called carnival event.

I can easily understand by far that knowing my perspective seems to be not enough. I am but an individual human being. However, we in Belgium do remember how so many people lost their lives 75 years ago. We have not forgotten. Each of these women and men, each of these children and elderly, were individuals.

Thus, I speak to you as if I spoke to those individuals, as well as to all Jews living in Belgium and all over the world.

I feel ashamed for these brutal signs of ignorance, demonstrated in the parade. I feel ashamed for the lack of common sense and respect. I am very disappointed in our authorities. Taking the first prize in this regard are the mayor of city of Aalst and its council. I criticize both the Flemish and the federal government.

Moreover,  I don’t understand how some Jewish representatives, elected for N-VA (the party of both the mayor of Aalst and the MP of Flanders, Mr. K. D’Haene and Mr. J. Jambon, respectively) did not raise their voices. They should speak out, in my humble opinion.

Last but not least, I cannot accept how Christian politicians did not interfere. Especially the federal minister of international affairs, Mr. P. De Crem, as I wrote him directly, in a separate note.

I wish to emphasize that I am not a politician myself. However, as a citizen, as a human being, as a son, as a brother, as a father, and as a grandfather, I feel sorrow for the pain these events cause to the Jewish community.

This parade was not about humor, it was not about carnival. Traditionally, carnivalists mock the people or events of current affairs that have recently given the world reason to mock them. That definitely is not the case with the Jewish people.

The conclusion is clear enough. This is wrong because it does not correspond at all with the principles of carnival.

I do hope my words may ease the terrible pain caused in my country today.

I do hope you understand this is not typically Belgian or Flemish.

Finally, I would like to state that justice and wisdom must rule above ignorance and stupidity. Those may be hard words, but making them the reality is even harder.

In Belgium, we have an institution whereby people may register a complaint against acts of racism and discrimination. It is unique in the world. UNIA — the Interfederal Centre for Equal Opportunities. Yet, of the thousands of citizens who were angry about the parade, only 25 complaints were registered against the Aalst carnival and the Aalst city council. Wir haben es nicht gewust. As if we never knew about it. It is so frustrating.

As I write, the events of Madrid’s carnival have taken place as well. They are fully back (they never left) and the word is watching. Wir haben es nicht gewust. As if we never knew about it.

About the Author
Bertin Sanders hails from a large traditional Catholic Belgian Flemish family. He is a retired teacher of Catholicism, as well as a retired freelance journalist/reporter. His mother tongue is Dutch.
Related Topics
Related Posts
Comments