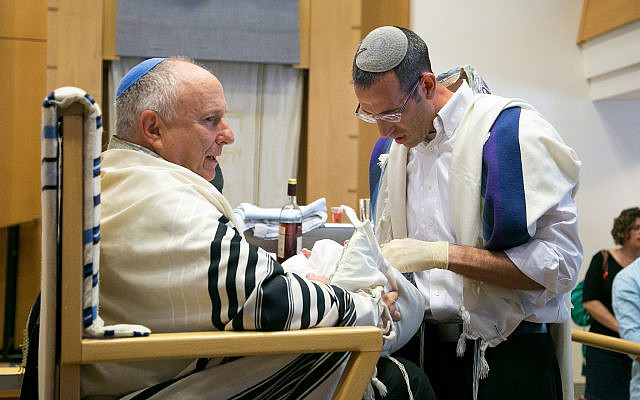 About a month ago, I received a call from a mother in Croatia. “We have no mohel in our region, can you come when our son is born?” I happily agreed. Perhaps to ensure my commitment, she recounted that the previous mohalim who had come to Zagreb had done a less than adequate job. I assured her that I would be there.

This was not the first time I’d received a call for a Bris abroad. I’ve served as a mohel in places such as Serbia, Spain, Germany, Kiev, and St. Petersburg, just to name a few. Still, this trip would be special because it would be my first time traveling since the onset of the pandemic.

But I soon realized I had a problem. Prior to speaking with this mother, I had agreed to officiate a wedding around the same time. As the date of the wedding approached, so did the birth. It became increasingly clear that the two events might overlap.

As it turned out, the baby was born a week before the wedding was to take place, so the Smachot would be on the same day. Under normal circumstances, I would have given primacy on a first-come-first-served basis. But knowing the track record of the previous mohalim in Croatia, I had no choice. I had to do the Brit Milah.

This began my frantic search for an alternate rabbi to oversee the wedding. Due to the short notice, this was no easy task. I was in touch with many colleagues but everyone was busy. In the end, I was lucky enough to find someone who was not only available but capable.

Upon arrival in Croatia, I went straight to check the baby. While there, I inquired about the other mohalim the mother had mentioned. Whenever you’re brought to another country there are always politics. Since this event was to be held at the local Chabad House — and I am not Chabad — I wasn’t sure what to expect.

When I finished meeting with the parents I continued on to meet the rabbi. Once the pleasantries were out of the way, his first question was whether or not I do Metzitzah. I assured him that I do, but according to Rav Ovadia Yosef. Rav Ovadia ruled that if there’s any concern of sickness (and COVID would apply), it can be done with gauze. Amazingly the rabbi didn’t bat an eyelash. He responded, “I’m not the expert in this field. I trust you.” I was amazed at this unexpected response.

There’s a considerable Israeli contingent in Zagreb who are mostly there to study medicine. It felt like this entire community showed up to welcome their newest member into the covenant. As it turned out, the father’s brother is a chef and he and the two grandmothers cooked feverishly to make a delicious feast. I would say that it felt like home, but the food outdid most of the restaurants in Israel.

As I finished the Brit Milah, I recalled something the Chabad rabbi said in our first meeting. “I just want this family to have a good experience,” he remarked. I realized that he was not the only one willing to put aside his own needs for those in his community. The rabbi in Zagreb is Chabad, I am modern Orthodox and my fill-in for the wedding was a Conservative rabbi.

We all could have easily gotten caught up in our own politics and halachic hang-ups and pointed out what the other was doing “wrong” but no one did. We all put aside our differences for the betterment of the Jewish people. It wasn’t about us — the rabbis, or our movements. It was about making sure that those we serve had a meaningful, and hopefully lasting connection with our tradition. Please God may this serve as a model for rabbis all over the world.