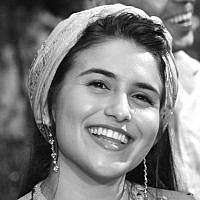 The Blogs
Tzippy (Shteingart) Baruch
Apply for a Blog
Advertisement
Please note that the posts on The Blogs are contributed by third parties. The opinions, facts and any media content in them are presented solely by the authors, and neither The Times of Israel nor its partners assume any responsibility for them. Please contact us in case of abuse. In case of abuse,
Report this post.

Disclaimer: Permission to use this story was granted by the party mentioned in this article

One major societal issue in this day and age is how quickly we jump to judge people. We assume she’s a snob based on what she is wearing. We assume he’s a slob based on what he is wearing. She must be a loser if he hangs out with them. He must be a tree hugger if he votes for them and etc. Often when I am having a deep conversation about life, goals, and what we need to work on in ourselves, one of the most frequent things I hear is “I’m trying not to be so judgmental.” In fact, it is precisely one of the things I am working on as myself. And yet nonetheless, most of us are still judging all the time. We’ve got that “judge” switch on in our minds and it is practically automatic. It is going to take much more than merely acknowledging that we are judgmental in order to shut it off, although that certainly is the first step in the right direction. Now I am definitely no authority figure on how one may work on him or herself in order to achieve the goal of not judging practically, beyond simply have it as a goal. I can imagine that a psychologist or perhaps one highly disciplined in the arts of mindfulness would be better suited at giving such advice. What I can do, however, is provide a recent account in my own life of such a situation where I was inclined to judge.

Sometimes, we need an unexpected situation to give us that figurative slap in the face. I got mine a year ago in political science class. The course was entitled Middle-East in World Politics. As a strong advocate for and lover of Israel, I decided to see what perspective a secular institution could give me on the situation in the Middle-East in order that I might become well-versed in the opinions of all parties. I soon found out that the perspective was not as objective as I had thought. In fact, I was rather pleased to find out that the professor was a native Israeli woman.

Now I thought this was a good thing; that she would be “on my side” and present Israel in a shining light to the ignorant youth of the CUNY system. The class was divided into what I came to call the overly-emotional Jews, the quiet Moslems, and the oblivious others. I looked forward to helping the professor put the latter two groups in their places. As it turned out, this was not to be the case. I was absolutely shocked and appalled to learn just how neutral she was in matters regarding Israel. Where was her national pride? At least if she was going to choose to live in the states, she should represent Israel here, and advocate on her behalf. Yet her stance was painstakingly neutral. And so I resented her. I resented this missed opportunity on her part to shed the light onto the others, and to teach them the truth. I resented the wasted space she filled. In short, I had little to no respect for this woman. And one day, all of this changed.

For the final stretch of the semester, she had given us a book to read about Israel and her history. This book included a chapter on the Jewish settlers in the West Bank, and yet completely skipped any details or explanation on the Six Day War, let alone a chapter. When she asked for our opinions on the book, I questioned how the author could discuss the settlers without first explaining how the land was attained in the war. She kept on shrugging me off, disregarding my comments, telling me that the Six Day War was not all that important. Then suddenly her mood changed. “You know what?” she said, “I’m going to tell you all something now that I do not really tell anyone, but I won’t hide it anymore because I am publishing my memoir shortly and then everyone will know. I’ll tell you the significance of the Six Day War. I lost my husband in the Six Day War.”

With that, she began to unravel her tale as a young wife in her twenties, expecting a child. Her husband was killed and burned beyond recognition when a Syrian missile hit his armored vehicle on June 9, 1967. She lost the child due to the shock of seeing her husband shortly before he died. At that point, the government was planning to eliminate pension rights of widows without children. She had lost her child, so she began a protest. Her story spread and she caught the attention of the press and Israeli parliament members. She became somewhat of a nuisance. At one point, she was told that she had a stalker following her case and she was advised by the Israeli Defense Ministry to leave the country. So she relocated to America. She grew to like it and got remarried, and she has been here ever since.

As she finished her story I felt awful. I had thought so poorly of her without having known all of this. I had judged her without knowing her background or understanding why she felt so neutral. Knowing what I know now, I’m surprised she is not a complete leftist and still manages to say anything positive about Israel and remain neutral! I certainly cannot blame her for feeling the way she does. I could never relate to her situation. And that is why I can never judge. Not her or anyone. We can never understand why people do the things they do. We must try to see the good in people and not pick them apart for their faults, especially if we do not understand what drives these flaws.

On Yom Hazikaron last year, I brought my professor some lilacs that I had picked from my backyard. I told her that they were for Yom Hazikaron, but more so, that they were an apology for the way I had judged her unfairly. I explained that she had granted me a valuable lesson in always being benefit of the doubt. She nearly cried. She said my apology and acknowledgement of her grief meant so much to her, and that in fact Yom Hazikaron continues to be an emotional day for her decades later. I felt good that I was able to remedy the situation. But how often are we not able to take back what we have said or done and fix it with a simple apology. Too often we let the words escape our mouths or thought invade our consciousness before we truly know the whole of a situation. In those moments we cannot imagine or recognize just how lasting and extreme the damage can be. We must begin to train our brains to think a little bit differently about every person we encounter. If our minds operate automatically like a switch, rather than a switch of negativity, it should be a switch of favorable judgement.

Professor Ziva Bakman-Flamhaft is the author of the memoir No Laughter in Winter. I look forward to reading it.

About the Author
Tzippy Shteingart Baruch is an award winning creative writer, and a God fearing Jew who loves Israel and made Aliyah in 2015 from New Jersey. She spends her time matchmaking and guiding singles.
Comments