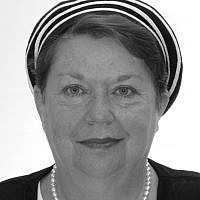 The Blogs
Shirley Zauer
Apply for a Blog
Advertisement
Please note that the posts on The Blogs are contributed by third parties. The opinions, facts and any media content in them are presented solely by the authors, and neither The Times of Israel nor its partners assume any responsibility for them. Please contact us in case of abuse. In case of abuse,
Report this post.

Reading Melanie Takefman’s blog titled “More about Dahlia – and Lubna,” in which she exhorts us to write “tributes” to the Palestinian victims of the “ongoing violence,” and calls on us to recognize the other side’s humanity, I was reminded of a line from a song from the musical A Chorus Line called “Nothing.” It goes like this: “And I dug right down to the bottom of my soul and… I felt nothing.”

This just about sums my emotional state today, making aliya as I did just three days before the long and bitter Terrorist War which started in September 2000. This bothers me greatly because I once did feel “something” for those others, but that something gradually disappeared while I cried for our victims of terror: for the two hapless soldiers ripped to shreds by a bloodthirsty Palestinian mob at the beginning of the war; for Malki Roth, the kind daughter of friends from Australia; for Koby Mandell and Yosef Ish-Ran who were just out enjoying a hike; for Dr David Apelbaum and his daughter Naava sharing some private time the night before her wedding; for the many other innocent victims of that horrific period and other terrible times before and since; and for all the beautiful soldiers who have died protecting us all.

So, Melanie, today I am filled with feeling for the families and friends of all those murdered Jewish souls; for the mothers, fathers, husbands, wives, brothers, sisters, grandparents, fiancés and others who were close to them who have a hole in their heart which will never be filled, some of whom have managed to bravely channel their grief into worthy causes, others who can barely get out of bed every morning and for whom getting through the day is a monumental challenge.

I often think of them as I go about my daily tasks and always when I light my Shabbat and Yom Tov candles and say a silent prayer for their souls. I can’t forget them because hardly a week goes by without another one to remember. I am using up all my emotional energy dealing with our own innocent victims of terror and I have nothing left for the Other.

Sadly, Melanie, humanizing Palestinian losses won’t make one bit of difference to the situation. Not today and not in the future. The fact that we don’t hand out candies and dance a jig every time there is a Palestinian casualty attests to our innate humanity – nay, we rather rush to apologize, beat our collective breast and set up commissions of inquiry. We place our own soldiers in mortal danger to avoid civilian casualties on the other side and even treat the relatives of our sworn enemies in our hospitals.

What may change the status quo is if the Other begins to humanize us and thinks and writes compassionately about our victims of terror, giving them names, faces and dreams. To paraphrase your final sentence: it may not change the situation in the near future, but it would be a start.

About the Author
Shirley Zauer is a journalist and editor who made aliya from Australia two days before the Terrorist War started in September 2000. Her political views were informed by living through those dark days. She regards living in Jerusalem as an honour and a privilege.
Comments