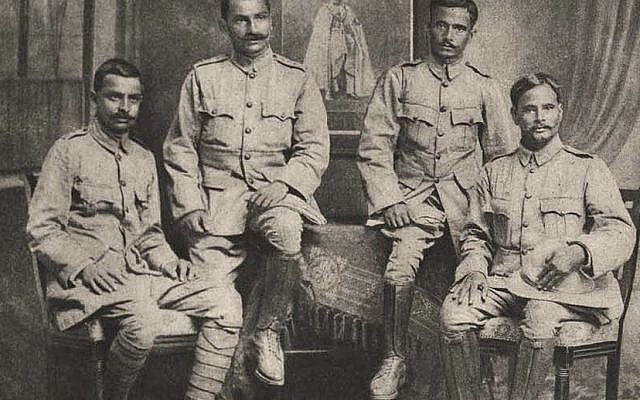 THE OFFICERS OF THE 3rd GWALIOR IMPERIAL SERVICE INFANTRY. IMAGE SOURCE: GWALIOR’S PART IN THE WAR COMPILED BY MOHAMMAD RAFIULLAH.

In one of the earlier articles by the author, he has in detail explained how the Jews of Maharashtra the Shaniwar Telis or Bene Israelis played an important role in the establishment of Maratha Empire, in India an indigenous Indian Empire after 561 years of foreign rule, of Turks, Turko-Mongols, Arabs, Afghans and other foreign elements with the help of their Indian comprador subservient allies. In this article the author tries to bring for the readers, the role of a Maratha Princely Family of India the Scindias, in liberating Ottoman Palestine from Turkish rule, opening the way for the creation of the Jewish state of Israel. 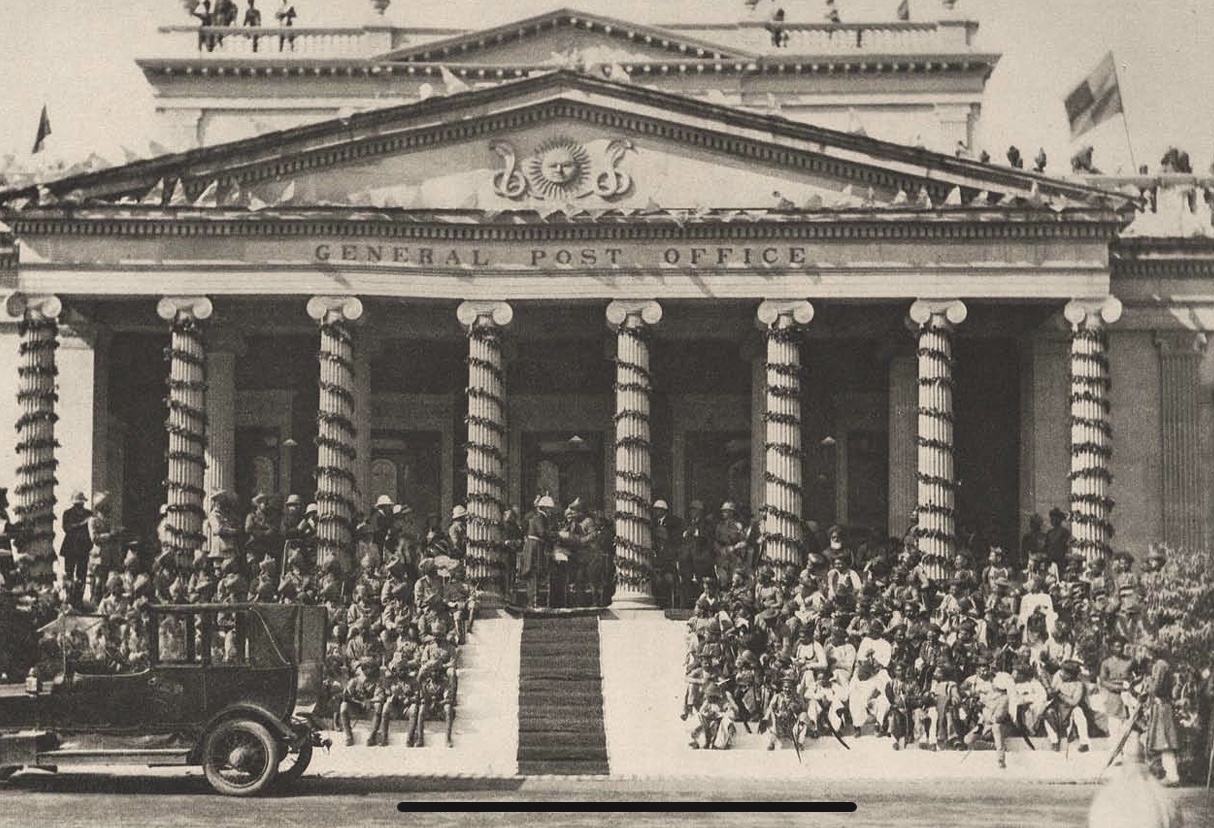 THE ARMISTICE CELEBRATIONS: HIS HIGHNESS MADHORAO SCINDIA I, ADDRESSING THE ASSEMBLAGE AT THE JAYAJI SQUARE, GWALIOR, INDIA, NOVEMBER 27, 1918. IMAGE SOURCE: GWALIOR’S PART IN THE WAR COMPILED BY MOHAMMAD RAFIULLAH.

India raised the world’s largest volunteer army, 1.5 million in World War I. Importantly for the first time, Indian soldiers were fighting on European soil. It must be mentioned here that they fought, in all the major theatres of war on land, air and sea, alongside British troops. Their many awards for bravery, as well as their war graves and memorials on the battlefields, are testimony to their sacrifice in the support of Allies against Central Powers in World War I. Unrecognised for decades, their contributions are only now being fully acknowledged. However, of these men, around 50,000 died, 65,000 were wounded, and 10,000 were reported missing, while 98 Indian army nurses were killed. The country also supplied 170,000 animals, 3,7 million tonnes of supplies, jute for sandbags, and a large loan (the equivalent of about £2 billion today) to the British government. 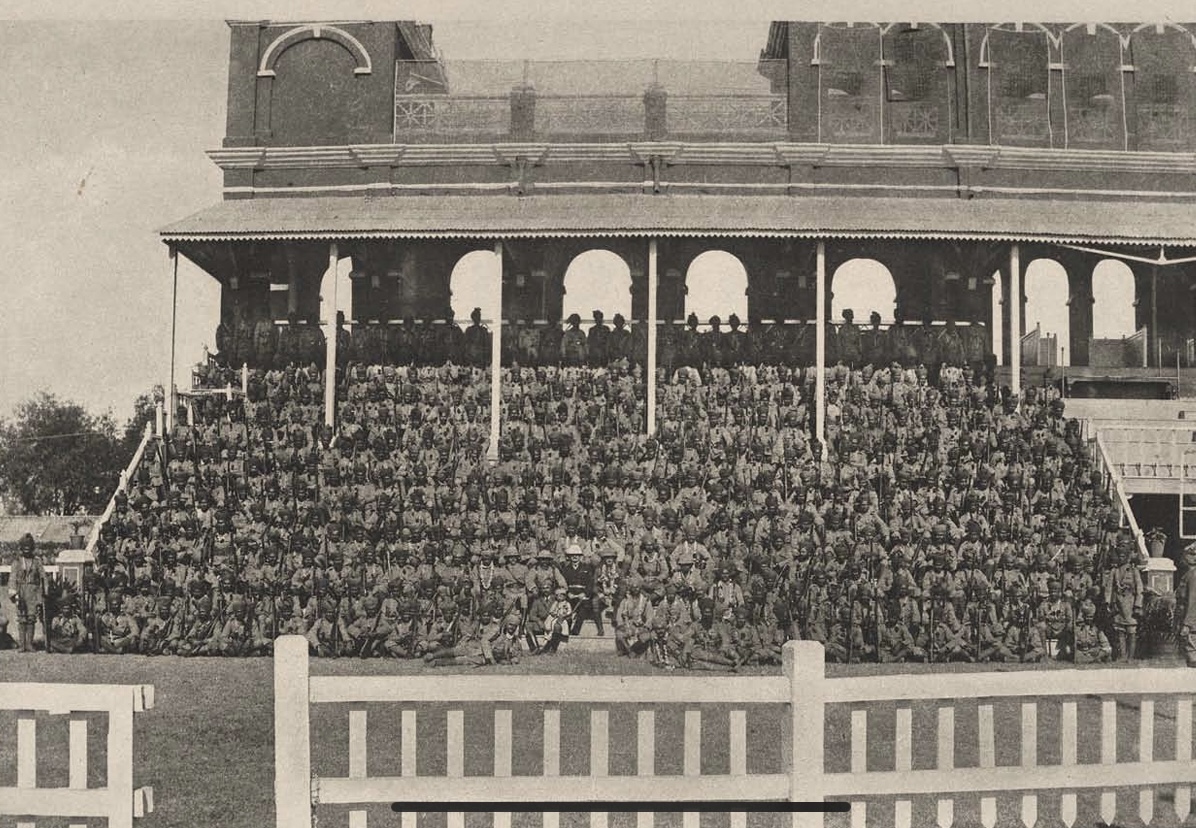 One of the important contributors to the effort of Allies to defeat the Central Powers, were Princes of India. The princely states of India varied greatly in size and at one time numbered up to 700 depending on the classification used. But there were five most prominent Princely States, who were entitled to 21 gun salutes in India, these were, Gwalior ruled by Scindias, Kashmir ruled by Dogras, Baroda ruled by Gaekwads, Mysore ruled by Wodeyars and Hyderabad ruled by Nizams. 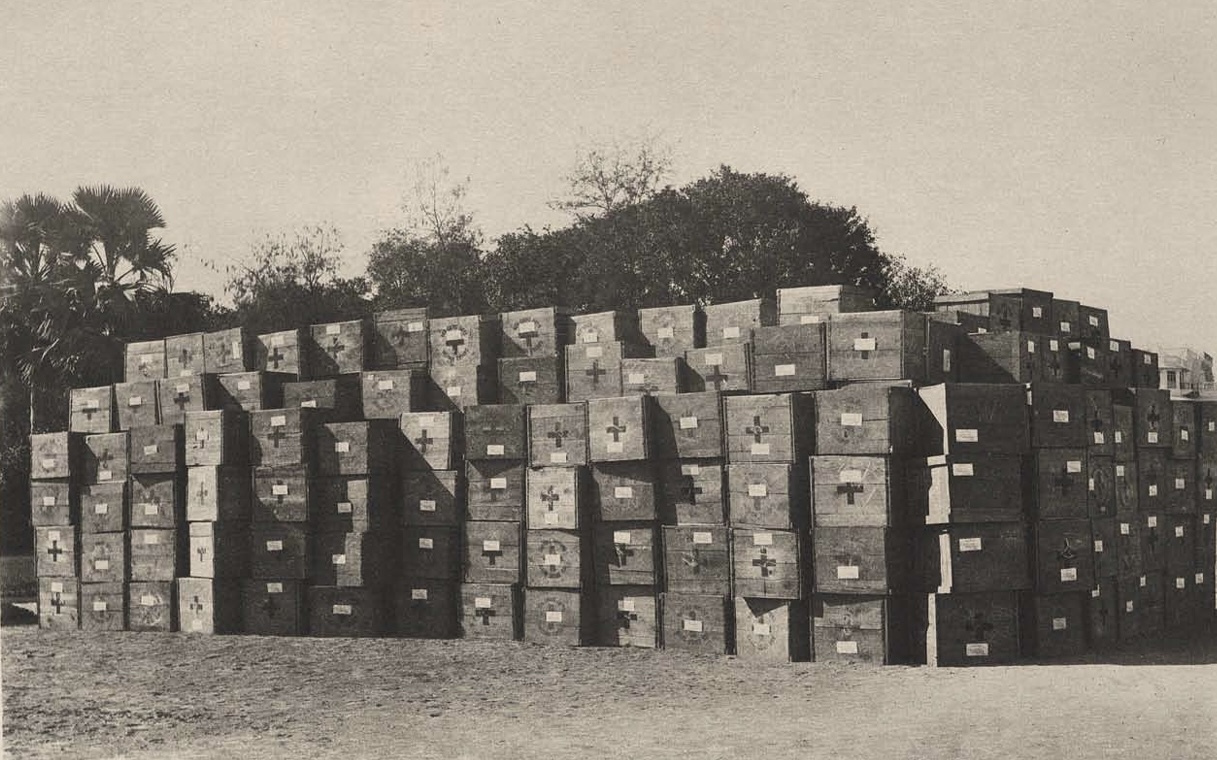 MATERIAL DONATED BY MAHARAJA SCINDIA FOR WORLD WAR I. IMAGE SOURCE: GWALIOR’S PART IN THE WAR COMPILED BY MOHAMMAD RAFIULLAH.

No less a sum than Rs.78,83,200 was paid out of the State Treasury of King Scindia of Gwalior, for various charities and forms of relief necessitated by the War. He organised a hospital ship; started a convalescent home; presented an ambulance fleet; entertained the families of inspecting officers of the Imperial Service Troops and units of the Indian Army passing en route through Gwalior; provided large quantities of comforts for the sick and wounded; presented cigarettes and other smoking-requisites to the Indian soldiers ; sent one lac of tins of vaseline and several hundred dozens of bottles of soda-water for the troops in East Africa etc.  In  World War I, more than one million Indian soldiers served overseas. The Army expanded from 2,39,511 in 1914 to 14,40,428 personnel by 1919.

Ottoman Palestine and Persecution of Jews 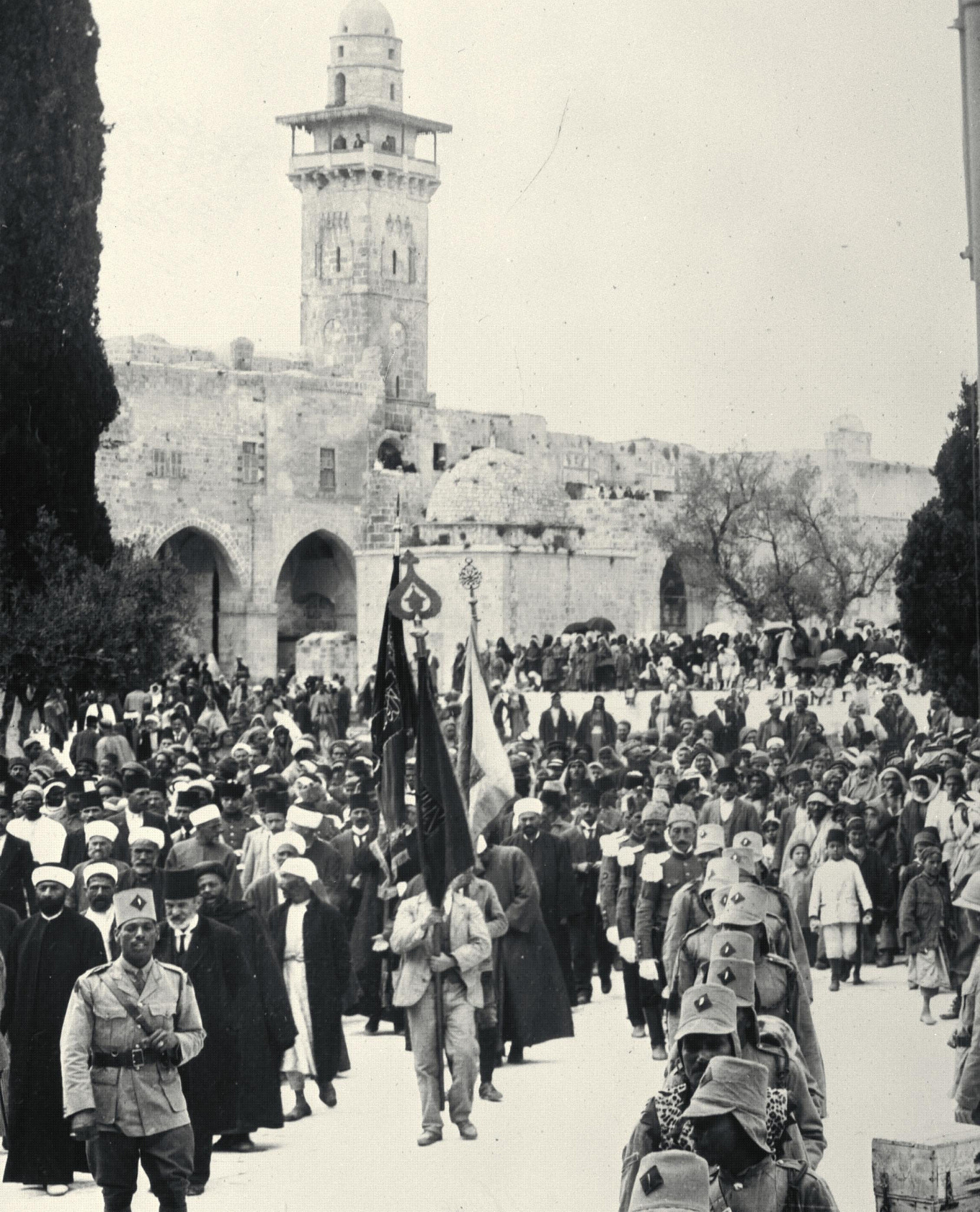 TURKISH SOLDIERS IN THE OLD CITY OF JERUSALEM, IN THE BEGINNING OF THE 20TH CENTURY. IMAGE SOURCE: WIKIMEDIA COMMONS.

The Ottoman forces defeated the Mamluk armies and conquered Bilad al-Sham, including Palestine. This marked the beginning of four centuries of nearly uninterrupted Ottoman rule over Palestine. There were several anti-Ottoman uprisings in Palestine, for example in the early eighteenth century, a local uprising against the Ottoman governor of Jerusalem—known as the naqib al-ashraf rebellion—was triggered by repressive policies and taxation. Later in the eighteenth century, local notable Zahir al-Umar al-Zaydani carved out a sphere of local autonomy in the Galilee. Another locally led uprising against taxation in 1825 was put down by the Ottomans.

Three New York Times accounts on persecution of Jews in Ottoman Palestine, from January and February 1915 provide these details of the earlier period. On Jan. 8, Djemal Pasha ordered the destruction of all Jewish colonisation documents within a fortnight under penalty of death. … In many cases land settled by Jews was handed over to Arabs, and wheat collected by the relief committee in Galilee was confiscated in order to feed the army. The Muslim peasantry are being armed with any weapons discovered in Jewish hands. Nearly all the [7,000] Jewish refugees in Alexandria come from Jerusalem and other large towns, among them being over 1,000 young men of the artisan class who refused to become Ottomans. As per a report describing the Jaffa deportation of early April 1917 published in the June 3, 1917 edition of The New York Times, included these details of the Jews’ plight: Orders of evacuation were aimed chiefly at the Jewish population. Even German, Austro-Hungarian and Bulgarian Jews were ordered to leave the town. Mohammedans and Christians were allowed to remain provided they were holders of individual permits. The Jews who sought the permits were refused. 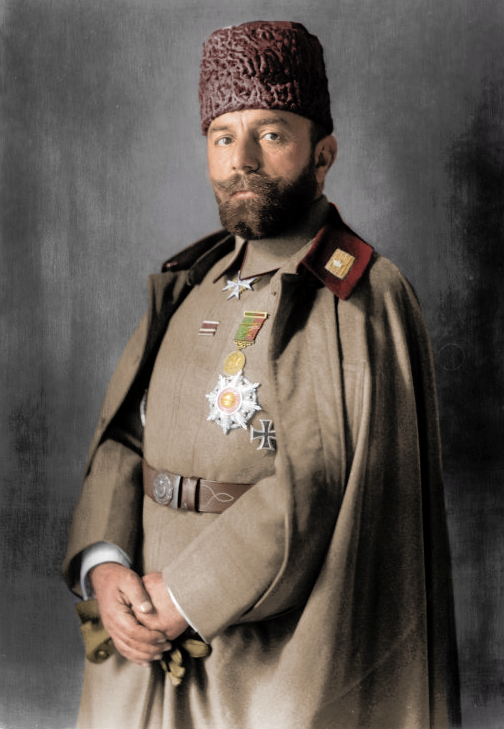 Djemal Pasha, Cemal Paşa in Turkish, an Ottoman leader and one-third of the military triumvirate known as the Three Pashas (also called the “Three Dictators”) that ruled the Ottoman Empire during World War I. Image Source: Wikimedia Commons.

Dozens of cases are reported of wealthy Jews who were found dead in the sandhills around Tel Aviv. It was mentioned in this report in New York Times that the same fate awaits all Jews in Palestine. Djemal Pasha is too cunning to order cold-blooded massacres. His method is to drive the population to starvation and to death by thirst, epidemics, etc., which according to himself, are merely calamities sent by God. 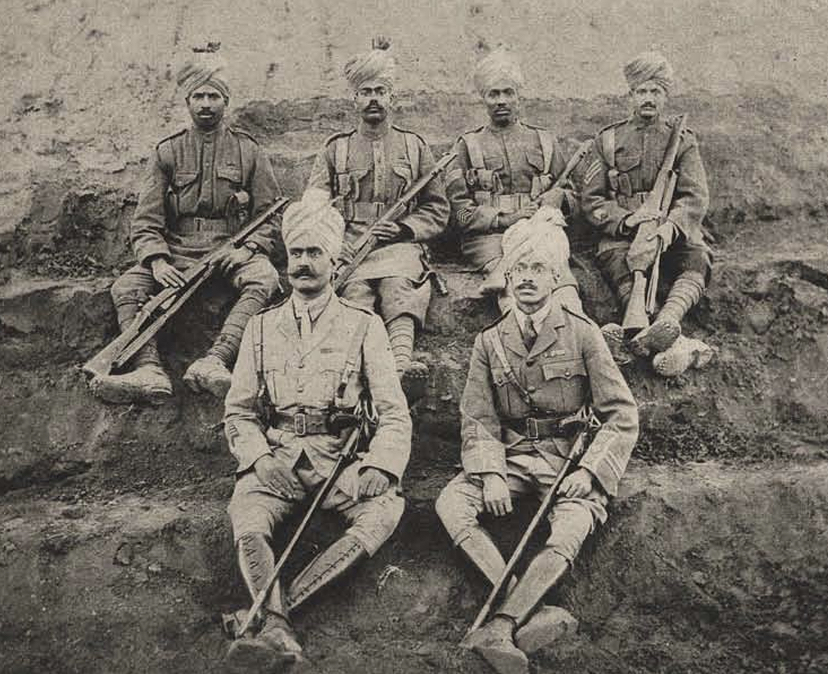 From the beginning of Gwalior Princely State, the Scindia was Gwalior’s first soldier. If we look back into the history of the State the meaning of this statement becomes obvious. Scindia were Marathas warriors who conquered the city of Delhi the power centre of Turko-Mongol and Afghan rule in Delhi for centuries. The Scindia Maharaja during independence of India from British, HH Jiwajirao Scindia was made a private on one rupee per month when he was four year old, in the Maharani’s Own Infantry that was announced by a Government Gazette notification in the year 1920 by his father HH Maharaja Madhorao Scindia I. 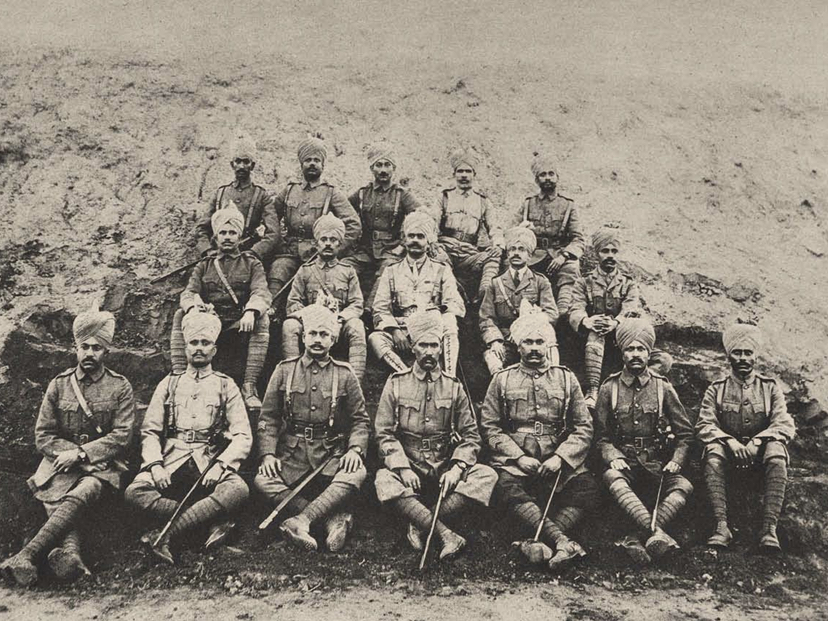 OFFICERS OF THE 4th GWALIOR IMPERIAL SERVICE INFANTRY ON THEIR RETURN TO GWALIOR AFTER ACTIVE SERVICE OF 4 YEARS AND 3 MONTHS. IMAGE SOURCE: GWALIOR’S PART IN THE WAR COMPILED BY MOHAMMAD RAFIULLAH.

At the outbreak of hostilities in 1914 units of the Gwalior ( Scindia State ) Army included among the Imperial Service troops were: 1st Jayaji Gwalior Lancers, 2nd Alijah Gwalior Lancers, 3rd Maharaja Madhav Rao Scindia’s Own Gwalior Lancers, 3rd Maharaja Scindia’s Own Gwalior Infantry, 4th Gwalior Maharaja Bahadur Battalion, and the Gwalior Transport Corps. Towards the end of September 1917, half the Battalion under the command of Lt.-Col. Girdhari Singh formed part of the Composite Force which took over the Mendur section of the trenches in front of Gaza and defeated the Turkish army from Gaza to Birsheba. While in the line and during the third battle of Gaza the Battalion formed part of the 20th Indian Infantry Brigade. Shortly after the battle the Battalion concentrated at Gaza. At the end of the year the Battalion was moved to Jerusalem where it was employed on garrison duty and also furnished detachments for Hebron and Bethlehem. In April 1918 the 4th Gwalior Infantry was moved to the Jordan Valley and took part in the defence of Ghoraniyeh and Auja bridgeheads. It was attached to the 60th Division during the operations at Shunet Nimrin and the attack on Es-Salt.


In July 1918 the Battalion was moved back into rest camp near Jerusalem and suffered from a severe epidemic of malaria. Three weeks later, however, it was again moved to the Jordan valley for the defence, of the Ghoraniyeh bridgehead. In September it took part in the final and decisive defeat of the Turkish army by forming part of the forces operating against Es-Salt and Amman. Towards the end of November the Battalion was relieved at Amman and thence moved back via Jerusalem to Suez. It reached Gwalior towards the end of January 1919 after more than four years’ continuous service overseas, during which it had earned the commendation of every G. O. C. under whom it had served. 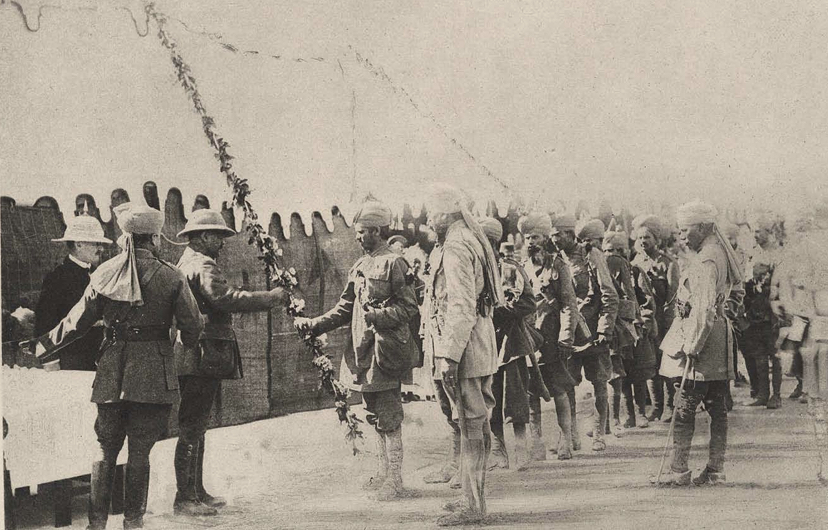 MAHARAJA MADHORAO SCINDIA I, GIVING AWAY CASH REWARDS TO MEN OF THE 4th GWALIOR IMPERIAL SERVICE INFANTRY AT THE RAILWAY-STATION ON THEIR RETURN FROM THE FRONT. IMAGE SOURCE: GWALIOR’S PART IN THE WAR COMPILED BY MOHAMMAD RAFIULLAH.

Here are some statements given by high officials of British Empire about King Scindia’s contribution to the First World War. Mr. W. E. Jardine. C.I.E., the Resident,  said : “ I cannot omit on such a day to mention the services of the 3rd Gwalior Infantry in East Africa, of the 4th Infantry in Egypt and Palestine, and of the Gwalior Transport in France and Mesopotamia. Without His Highness’s generous forethought, it would have been impossible to make speedy and adequate provision. “ His Excellency the Viceroy of India wrote on June 30, 1919, that “The Gwalior Imperial Service Troops have rendered valuable service, fought most gallantly in Egypt, in Palestine, and throughout the East African Campaign.” Commander in Chief of British Forces in Egypt to Viceroy of India, mentions ‘ I am happy to inform Your Excellency that the Imperial Service Troops from Gwalior did excellent work both in the Battle of Gaza and pursuit.’

Indians and Israelis Friends Committed for A Peaceful World 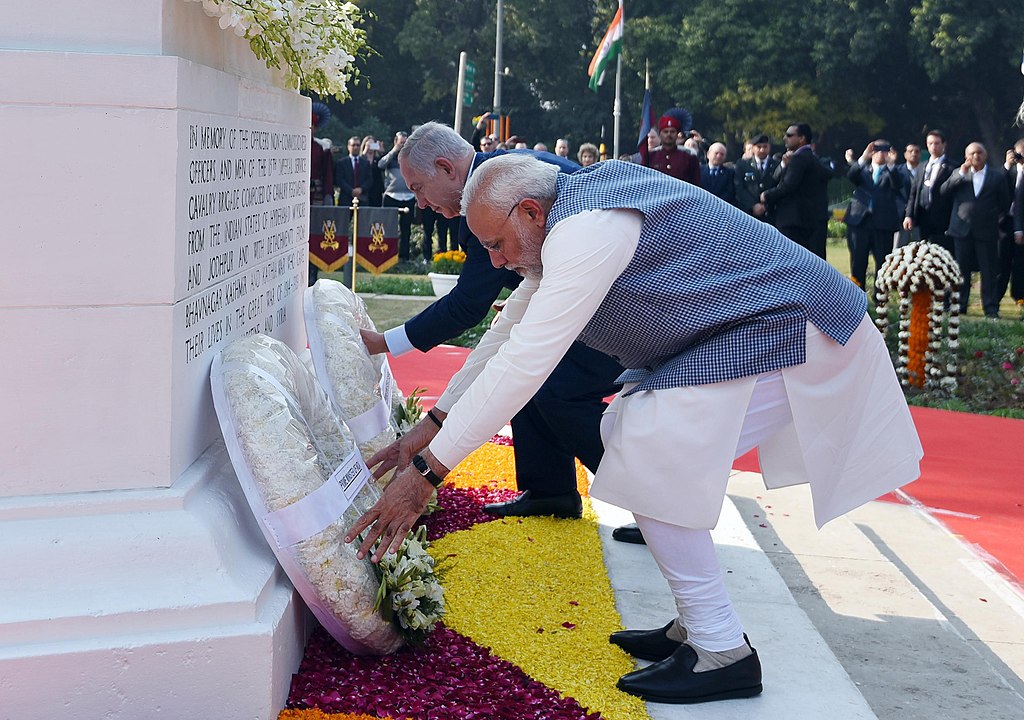 The devastating World Wars are now over, but several wars still plague different parts of the world now and then. The International Cooperation Architecture and World Bodies haven’t been unbiased enough to condemn the action of certain nations and groups who time and again destroy peace in different regions of the world categorically. Rather they loose no opportunity  to condemn Israel, a nation made by the sufferers of centuries of systemic violence, and pay no heed or do just lip service to India’s efforts to obliterate terrorism from the face of the earth. It is now an important point for India and Israel to come together as time tested friends, to prevent a disaster of the scale of World Wars to happen ever again.