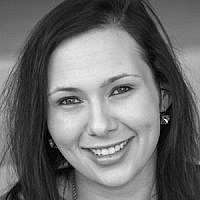 The Blogs
Samantha Dubrinsky
Apply for a Blog
Advertisement
Please note that the posts on The Blogs are contributed by third parties. The opinions, facts and any media content in them are presented solely by the authors, and neither The Times of Israel nor its partners assume any responsibility for them. Please contact us in case of abuse. In case of abuse,
Report this post.

Alabama attorney Jahan Berns does not blend into a crowd.

She’s tall, African, originally from Uganda, wears distinctly colorful clothes —  and radiates warmth. She is easy to talk to and her life story is fascinating.

Jahan, who practices law in Birmingham, is a strong Christian who loves Israel and the Jewish people. Having grown up in a Muslim home in Uganda, she converted to Christianity at a young age and has never looked back. In a sea of Jewish women from all over the US — myself and others she’s joined on Jewish Federations of North America’s Heart To Heart trip which is currently in Israel —  she’s hard to miss.

My colleagues at the Birmingham Jewish Federation and I met Jahan a few years ago and realized what an asset she is immediately. Her passion for standing up for what is right, especially when it comes to Israel, is something that we at the Birmingham Jewish Federation admired in her. And, when we learned about this national women’s trip to Israel,  we knew Jahan would be a tremendous addition to our Birmingham group.

And we were right. When we arrived in Tel Aviv, jet-lagged and tired, I could see that Jahan was crying.

“Are you okay?” I asked her, concerned. And she responded, “Yes, this is just unreal. I have been crying ever since the pilot told us we were entering Israeli air space. This is so special to me.” I knew at that moment that this trip would be something Jahan, and the rest of us, would remember forever.

Before the trip officially started, our group of Birmingham women traveled to the Israeli city of Kiryat Gat to visit a protective shelter donated by a Birmingham family through Operation Lifeshield, an organization that provides such shelters throughout Israel to shield Israelis from rocket attacks. Our Federation has established a great relationship with Operation Lifeshield’s Executive Director Rabbi Shmuel Bowman and many Birmingham families have contributed funds to erect these badly-needed shelters.

Jahan and her husband Bob have worked tirelessly over the past year to raise the funds needed to provide a shelter. At the end of last year, after fundraising among friends and family — even all the way from Alabama to Chicago — Jahan sent her last check in and the building of the shelter was set into motion.

The shelter Jahan helped provide is right next to the Gaza Strip, a little too far from where we are staying, so we visited another shelter that was about 20 miles from Gaza in Kiryat Gat. What Jahan didn’t know is that Rabbi Bowman would present to her the plaque that is going to be mounted on the shelter that her relentless efforts provided.

Jahan, I could tell, was overcome with emotion, as were the rest of us in the room. I wiped my eyes as I thought about how special Jahan is and how many lives she and those who donated will be protecting. It was a special moment that left us all emotional — and the organized trip hadn’t even started yet!

As Jews, we are lucky to have Christian friends who are just as passionate about Israel as we are. But, Jahan is a special kind of friend. She lives and breathes for the tiny Jewish nation she had never visited until now. Thank you, Jahan, for your passion and dedication, for your determination and fundraising efforts, and, most importantly, for being our friend.

And if you see our group of North American Jewish women in Israel this week, please thank Jahan — you will recognize her, I promise!  She has become a beacon of friendship to all of us.

About the Author
Samantha Dubrinsky is the Director of Community Impact for the Birmingham Jewish Federation.
Comments