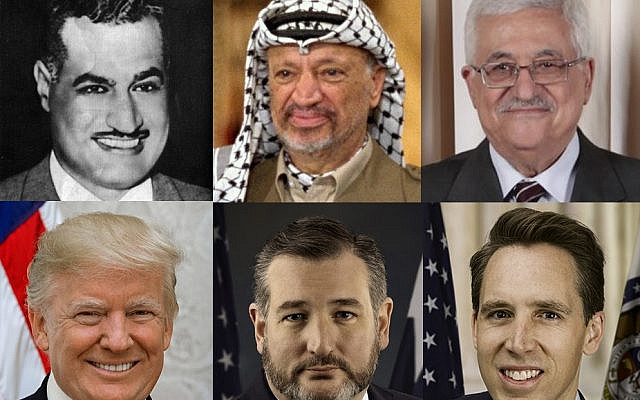 The Arab conflict against Israel was built on one huge lie, which is the claim that Jews have no right to self-determination in Palestine. Everything else, every other lie, every incitement, every call to violence, is based on that single lie.

With that lie, opponents of Israel justify why Arabs refused to accept the 1947 United Nations partition plan that divided Palestine into two almost equal portions, one almost exclusively for Arabs, and the other for Jews and Arabs with a Jewish majority. With that lie, they justify every war against Israel, every terrorist attack, and every strategic lie, as an effort at liberation against oppression.

Palestinian leaders and Arab leaders, including former Egyptian President Gamal Abdel Nasser, PLO leader Yasser Arafat, current Palestinian Authority chairman Mahmoud Abbas, and many others, are responsible for creating that lie and for allowing it to fester.

Individual Arabs and Palestinians are responsible for believing the lies and acting on them, but their responsibility is much more mitigated because in many cases, they likely believed the lies. When an authority figure that you respect lies repeatedly and consistently, it is not easy to break away from the lies and uncover the truth. It involves challenging your own peers. It involves questioning everything that you’ve been taught. It also involves risking your safety and the safety of your family. It’s much easier to go along.

Lies lead to violence in a very direct way. The bigger the lies, the more extensive the violence.

But this fact isn’t limited to the Israel/Arab conflict. It’s the same everywhere, including in the United States where the outgoing president, Donald Trump, has been lying for two and a half months about the results of the election, claiming that he won but that the election was stolen from him.

To Trump’s followers who have believed him for years despite his many lies that have been extensively documented, Trump’s big election lie is not a lie but a fact. They believe that the election was stolen from him by corrupt politicians and corrupt judges, and that therefore it was stolen from them since they voted for him. They also believe that without him, America will fall apart, because he told them so. And since they believe the lies, who can blame them for being angry? Just as who can blame Palestinians for being angry at Israel if they truly believe that European invaders stole their country?

Any honest person who has studied the history of the Middle East knows that Jews are an important and intrinsic part of the Middle East, with Jerusalem as their center. This is not a debatable point. It is a fact. If one accepts that fact, then one cannot seriously deny that Jews have the right to self-determination. One can reasonably argue over what borders of the Jewish state should be, one can reasonably argue over whether some of Israel’s actions are fair towards Palestinians, but one cannot reasonably argue that the existence of a Jewish state is fair and just.

Similarly, any honest person who has examined the evidence around the results of the 2020 US presidential election cannot reasonably argue that Trump won. Trump lost by a wide margin of electoral college votes. For Trump to win, he would have needed thousands more votes in several battleground states. This is nothing like the 2000 US presidential election when the victory came down to a few hundred votes in a single state. For someone to believe that the 2020 election was stolen from Trump, they would have to believe that there was widespread corruption across multiple states among state politicians and judges, including many who are Republicans and even Trump supporters. One can reasonably argue that there was some limited fraud, to the advantage of one candidate or the other, and state officials have acknowledged that, but one cannot reasonably argue there was widespread fraud that caused the election result to be reversed. Many judges, including judges appointed by Trump, have rejected such allegations. To claim that the election was stolen is simply a lie.

We should unequivocally denounce the violence at the US Capitol on January 6, 2021, just as we should unequivocally denounce the violence against Israel. Trump did so one week too late, but he didn’t utter a single word that would indicate that he lied about the election results. This is the same as when Arab and Palestinian leaders denounce terrorist Palestinian violence but refrain from taking back their lies about Israel’s right to exist.

If I was one of Trump’s supporters who believed that the election was stolen, I would hear from his video that despite the election being stolen from me by a conspiracy, by corrupt politicians and corrupt judges, I’m supposed to shut up and be nice to those who violated my democratic rights. Trump’s speech would not alleviate my anger, on the contrary.

Similarly, the only way that Trump can come even close to repairing the damage that he’s done is by acknowledging that he’s been lying for two and half months about the result of the election, that he lost fairly, that he was wrong to say otherwise, and that his lies constituted incitement. It wouldn’t bring back to life those who died, and many of his followers would likely think that he was coerced to make that statement, but it would be an honest attempt at repairing the damage that he’s done. His speech denouncing violence was not an honest attempt. It was only the minimum required to perhaps limit his personal liability and to prevent Vice President Mike Pence from invoking the 25th amendment to remove him from office early. Nothing more. Trump holds responsibility for lying and must be held accountable, and so do the many Republican politicians who supported his lies, including Senator Ted Cruz, and Senator Josh Hawley.

Peter Meijer, one of ten House Republicans who voted in favor of impeaching President Trump on January 13, said about himself and his nine colleagues, “I have colleagues who are now traveling with armed escorts… many of us are altering our routines, working to get body armor. It’s sad that we have to get to that point but our expectation is that someone may try to kill us.”

Lies lead to violence, and violence leads to death. The lies must stop, and those who lie must be held to account for their lies if they don’t voluntarily do so themselves.