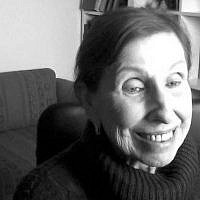 The Blogs
Janet Goren
Apply for a Blog
Advertisement
Please note that the posts on The Blogs are contributed by third parties. The opinions, facts and any media content in them are presented solely by the authors, and neither The Times of Israel nor its partners assume any responsibility for them. Please contact us in case of abuse. In case of abuse,
Report this post.

It seemed that there would be forever to ask all the questions. When I was young, I wasn’t interested. What did the older generation know? Who really cared what the lives of my grandparents or my great grandparents were like in a Polish village so many years ago?

Now, I am old and it is far too late to ask the questions, for who would answer? But how I wish I could. How sorry I am that I don’t really know anything about the lives of my ancestors. Listening to a klezmer concert reawakened thoughts of the past. Is this the music that had moved my ancestors as they listened to the soulful sound of the clarinet or danced to the joyous notes of the accordion at weddings? How did they live? Were they happy? Nothing. I know nothing. I can make certain assumptions by reading about pre-World War I life in Poland, but what does that really tell me? If I know about life in Herzliya in 2022, do I know anything about anyone?

Enter Time Capsule. My children, if they so desire, won’t have to ask the questions when it is too late to get answers. Their children will be able to learn what my life was like, what I thought, feared, loved and hated. They will know about my hopes and dreams as a child, what it was like growing up so far away in Newark New Jersey and how I came to Israel.

Time Capsule. It started for me with a phone call from a former student, a truly wonderful one. He hoped he wasn’t being insensitive when he told me his uncle was looking for elderly people to participate in a pilot (I was 77 at the time). The idea was to conduct and film in-depth interviews with, well, old people and would I like to do it. He went on to explain that the interviews would cover a truly extensive range of subjects, from childhood to the present. The Time Capsule team was working on algorithms which would enable my children and future generations to posthumously interview me and so get answers long after I am gone.

It was at the start of corona and we were all home-bound. The interviews were first conducted on Zoom. How wonderful it was to escape those trying days into the world of my youth and then on to adulthood. When they had finally covered much of my life, or as I remembered it, my son tried it out. Could he really ask me questions and then get answers. It worked! I don’t know if my grandchildren will ever wonder about their roots, but if they do, they will be able to get answers.

I thought of Time Capsule today, as I was walking around my neighborhood. I passed a house which had a small garden that had once been perfectly maintained. Not a single weed dared enter, every bush was pruned to perfection, and not a wilting flower could be seen. The owner passed about a year ago. I remember seeing the children at the shiva. One of them became the new occupant, but obviously he did not share his father’s love of gardening. The weeds took over with a vengeance. There still were no wilting flowers to be seen since there were no flowers at all. I thought of this pedantic gardener. Would anyone remember how he lovingly labored to take care of all his plants and flowers? What would they really know about this man? And if someday his grandchildren asked questions, who would be there to answer?