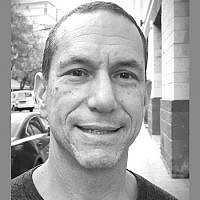 The Blogs
Louis Frankenthaler
Apply for a Blog
Advertisement
Please note that the posts on The Blogs are contributed by third parties. The opinions, facts and any media content in them are presented solely by the authors, and neither The Times of Israel nor its partners assume any responsibility for them. Please contact us in case of abuse. In case of abuse,
Report this post.

December tenth is International Human Rights day. Seventy-one years ago, in the shadow of the Shoah and the other atrocities of the Second World War, the international community gathered together to lay out a moral foundation for the universal application of human rights. The United Nations General Assembly in Paris proclaimed the Universal Declaration of Human Rights (UDHR) on December 10, 1948.

The interesting thing about the Universal Declaration of Human Rights, to me, is that it functions sort of like our Torah. It lays out the full range of rights and principles that are essential and applicable to every human being.

It basically creates a platform for recognizing the universal value of every person on the planet, acknowledging that all of us are endowed with an equal amount of divine worth, if you will. In a similar note, Torah relates that the human being was created in the Divine Image. It does not differentiate between the people at that moment. Lest people forget (and the terrible truth is they did, many times), subsequent Jewish texts (and texts of other traditions) were written to augment this divine wish or commandment laid out in the Torah.

So too in the universal human rights tradition additional texts written to delineate the rights addressed in the Universal Declaration. In order to completely lay out the full range of civil and political rights addressed, the United Nations wrote the International Covenant on Civil and Political Rights to which most member states of the UN have signed on and which is now part of the system of International Human Rights Law. The UN did not stop here. For example, while the UNDR declares torture forbidden, the world needed a more complete covenant to bind countries by this prohibition. As a result, the UN Convention Against Torture (CAT) was enacted. Another example of this is the Convention on the Elimination of All Forms of Discrimination against Women (CEDAW) and the International Covenant on Economic, Social and Cultural Rights (ICESCR).

One would think that the application of these rights would be taken for granted but the reality of our contemporary society is that just because rights exist and are even enshrined in international law (or in a “Bill of Rights” or in a “Basic Law of Human Dignity and Freedom”), people have to struggle for the application and realization of these rights. This has become the task of human rights NGOs.

From Human Rights Watch to Rabbis for Human Rights, our struggle is an ongoing one for the recognition and application of all human rights for all people.

Like Torah, whose ways are pleasant and whose paths lead to peace, the Universal Declaration of Human Rights is also a path for peace. In Israel, a state established as a national homeland for Jews, in the direct aftermath of one of the most atrocious crimes against humanity, it is truly mind-boggling that the protection and application of these rights is a struggle. But it is.

In the face of such exploitations, it is upon all of us— Rabbis for Human Rights, others in the human rights community, and you — to be the corrective.  We must act now for a day when human rights are not a struggle but a foregone conclusion.

The above was co-authored by Avi Dabush, Executive Director, Rabbis for Human Rights.