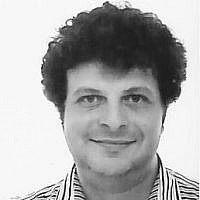 The Blogs
Barak Ben-Shem
Apply for a Blog
Advertisement
Please note that the posts on The Blogs are contributed by third parties. The opinions, facts and any media content in them are presented solely by the authors, and neither The Times of Israel nor its partners assume any responsibility for them. Please contact us in case of abuse. In case of abuse,
Report this post.

The small town of Bushey, near London, in a bucolic and prosperous part of England, is, by all accounts, a special place, and not particularly anti-semitic: in fact, about 11% of the town is Jewish, and it has a strong Jewish community life, including a significant number of Orthodox Jews. Therefore, please keep in mind that nothing I say in this article is about Bushey as a place: by definition, is Jews want to live there, we can assume, if anything, that it’s more tolerant and pluralistic than many other places. However, something has recently happened in Bushey that gives us the rare opportunity to trace a phenomenon normally quite hidden: that is, how genteel Western anti-semitism, the kind that arises mainly from distaste at having too many pushy Jews around, snowballs, filtered through various fanatics, into a new crazy slander that might (let’s hope not) spread quickly around the world.

Specifically, the Orthodox Jews of Bushey went to the planning board to request the right to put up an Eruv. Normally, this process is an automatic one, since there is not much to an Eruv – just some poles and fishing wire. Normally, in the United States and England, it goes unnoticed: but not always. In the Hamptons, on Long Island, the community rose up against it, frankly because they were afraid too many Orthodox Jews would move to the area – sadly, this grass roots anti-Eruv movement included some Reform Jews as well. It was a bad enough scene, and divisive enough, to be included in the New York Times:

Bushey, however, as opposed to Hamptons, has some real community spirit and grass roots organizing ability: and so, at the planning council meeting to debate the Eruv, somewhere north of 150 residents spoke out against it, and the local newspapers of the county began covering the struggle, of these residents, against an Eruv that would certainly bring in – or so they thought – more religious Jews into the neighborhood. The planning commission of Hertsmere Borough, where the Eruv is located, apparently did not have the right, for legal reasons, to take into account issues of social divisiveness or inclusion into the discussions –only the normal planning issues of environmental, aesthetic and other similar impacts – and therefore unanimously approved it.

This led to a continued fight by those residents of Bushey that really, really thought that many more Orthodox Jews entering the town would impact their lifestyle. To repeat the quote that one of them, Gay Butler, a retired teacher, gave the “York Press”: “There is a strong village ethos in Bushey. It’s not like Borehamwood, Edgware and Stanmore where eruvs have already been erected. There’s a strong village identity here which may not be seen by outsiders, but which is very strong amongst residents.” If that wasn’t clear – was it clear, dear readers? – Ms. Butler added that “Representatives from the synagogue did not asses what Bushey was like before they proceeded.” The local Rector of the Anglican Church, instead of calling for an end to these kinds of comments wished that those Jewish residents of Bushey who wanted an Eruv would reopen the consultation. Given the kind of opinions some (and let’s remember – less than 1%!) of the residents of Bushey have made in the comment sections of the articles that have been following this teacup tempest, I believe the synagogue did the right thing by refusing to allow this issue to become the plaything of fools and demagogues, and simply considering, once they had the legal right to build the Eruv, the issue closed.

However, the issue is not closed. John Dowdle, the chairman of something called the “Watford Area Humanists” commented, in a number of articles that appeared that claimed that the opposed Bushey residents would continue their fight, that “In Israel, people driving cars on Shabbat (Saturday) are subjected to stone throwing by ultra-orthodox religionists.” Was that going to happen in Bushey, he wondered? And in an article in the Watford Observer letting us know that the residents were “very saddened but not surprised”, a John Dowdle commented (there is no proof it is the same John Dowdle, please note) that

“The arrogance and ruthlessness displayed by the applicants in suborning local government officers and councillors will be cited as an example of the way in which one particular group uses its money and influence to get what it wants regardless of the impact upon others in the local community.

It also has a wider bearing. Right now, peace talks are taking place in the Middle East, between Israeli and Palestinian representatives, under the sponsorship of the Americans. Yet, almost as soon as the talks were announced, the Israeli government announced further settlement developments — all of which are illegal under international law.

This eruv development — fuelled by religious extremism and moneymaking — is but a carbon copy of the problems faced in attempting to secure peace in the Middle East, in particular attempts to resolve outstanding issues between the Israelis and Palestinians.

Both are symptomatic of the arrogance and ruthlessness of those parties who hold a supremacy of power and influence in both situations..

Maybe now people will have a better understanding as to why people such as myself side with those Palestinians seeking fairness and social justice.”

Lo and behold, from not wanting Jews to move in to the language and terms of the global BDS movement, in two steps. To be fair, it certainly SHOULD give our readers a better understanding to why people such as himself side with the Palestinians…

But this is not all. In my studies of anti-semitism I have noticed that, as opposed to other racisms, Anti-Semitism seems to employ an unusual number of professional haters. These are people who seem to have no other job or source of income than to create lies about Jews and spread them around in as many places as possible. And it is from here that this foolish comment by a resident of the pleasant Village of Bushey who does not want Jews giving his town a “forced Jewish identity” has made it to the site of Intafada-Palestine where the storm in the teacup takes even greater dimensions: it is apparently not enough for us Jews building settlements in Hebron: the author now asks: “Are Jewish communities planning to ‘annex’ parts of north London?” At this point, the influx of BDS language and those of some locals who don’t want the smell of Chulent Friday evening becomes even more hypnotic: According to the author, who appears to be Stuart Littleton, and who has been posting this all over the web, “It seems that Jews in England can’t abide their own religious laws any more than their brethren in Israel can cope with international law and humanitarian law. Is this the thin end of a wedge to achieve annexation by the back door… lots of Little Israels in England‘s green and pleasant land? Bushey is already occupied territory, evidently. Whatever next?” Littleton is, of course, the author of Radio Free Palestine, whose Forward was written by Jeff Halper, Co-Ordinator of the Israeli Committee Against House Demolitions. He also writes for Al-Arabiya, although not, yet, about the pernicious secret meaning of the Eruv as a form of Jewish controlled territory through the surreptitious mounting of secret poles and fishwire – no for now, he is content to ask that the BDS movement be expanded to include pro-Israel House of Commons politicians.

Will this spread through the Arab world? My view is, it is inevitable once it hits this particular crowd of people who seem to be translating old genteel anti-Semitic accusations into the language of the Great Jewish Conspiracy and then presenting it for the delectation of the Arab World and the BDS movement. However, let’s remember one thing, and I will comment on this more when I write about the Arab world in subsequent posts – the pathway of contagion here is “The racists in a pleasant English Village” TO “The BDS movement’s Fanatics” TO “The Arab World” – and not the other way around. This particular story is worth watching not because of what it says in itself – there will always be a couple of anti-Jewish cranks in any town – but because it shows us, lit up, the pathways through which suburban anti-Jewish prejudices are magnified through the BDS movement and brought to the Arab world.

About the Author
Barak Ben-Shem is a Jewish "Israeli-American" (Born in the US to Israeli parents.) He has run an investment fund for the last ten years and before that ran a private equity fund in Romania. He is a PhD candidate at Columbia University, studying sociology.
Related Topics
Related Posts
Comments