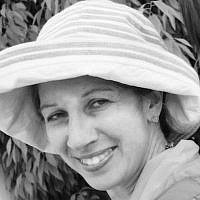 The Blogs
Liane Grunberg Wakabayashi
Apply for a Blog
Please note that the posts on The Blogs are contributed by third parties. The opinions, facts and any media content in them are presented solely by the authors, and neither The Times of Israel nor its partners assume any responsibility for them. Please contact us in case of abuse. In case of abuse,
Report this post.

Call Kengo Kuma an architect, or a COVID-19 prophet, his $1.4 billion Tokyo National Stadium, in five shades of earth tones, looked beautiful even without spectators. But not everyone in Tokyo was happy about it.

The Tokyo 2020 Olympics have been stranger than fiction, when Iraqi-born architect Zaha Hadid’s bicycle helmet-inspired design for the Tokyo National Stadium was swapped for a more environmentally friendly design and 60,000-seats which were warmed by less than 1,500 in attendance–owing to the Covid pandemic.

For Ankie Spitzer, the sublime moment at the Tokyo 2020 Olympics came before the first competition even began. The wife of Andre Spitzer, one of the 11 athletes murdered by Palestinian terrorists at the Munich Olympic Village during the 1972 games, had for 49 years petitioned the IOC, the International Olympic Committee, with a request that fell on deaf ears. What was her request? A moment of silence to honor the athletes and their coaches slaughtered by terrorists.

“Why didn’t they agree to do such a humane normal thing in previous Olympics?” asks Spitzer, Israel correspondent covering the Middle East for Dutch and Belgian television. The IOC said we are bringing politics into the Olympics, to a joyous opening event and it wasn’t appropriate to do a memorial. I told them that if you didn’t do it in my lifetime, it would happen in my children’s.”

The Times of Israel reported IOC President Thomas Bach’s heartfelt apologies, describing the Munich massacre as “not only an attack on our fellow Olympians but also an assault on what the values of the Olympic Village stand for.”

Spitzer called it quite the coincidence that the first year that the IOC mentioned the murdered Israeli athletes, they had to hear Hatikva, the Israeli national anthem, played again and again and again with each medal Israel won.

Stranger than fiction? Or just the new normal, where the sublime and the ridiculous have become the new norm at the Tokyo Olympic Games.

Shari Wright Pilo and David Wiseman run a popular Facebook group called Follow Team Israel, which boasts some 340,000 followers and attracted 1.3 million viewers to its platform during the Tokyo 2020 games. They have an admirable policy of focusing their coverage on the hard work and moments of triumph of the team members. “We’re both passionate about Israeli sports and recognized that there just wasn’t enough in English. To our delight, we’re finding that our followers come from all over the world, both Jewish and non-Jewish.

“We follow the journey of the Israeli athletes all the way through, in terms of qualification. For many of the sports, their participation is only confirmed 3-6 months beforehand. Follow Team Israel put in 20-hour days, engaging with followers, breaking the exciting news of gold-winning champions gymnast Linoy Ashram and artistic gymnast Artem Dolgopyat, as well as the bronze-medal winning Israel mixed judo team, and taekwondo bronze medalist, Avishag Semberg.

Not long before Covid, in the summer of 2019, I had accompanied Dr. Meg Rincker, professor of sociology at Purdue University, to a meeting at the Prime Minister’s residence in Tokyo to talk with Prime Minister Shinzo Abe’s press officer about preparations for the Olympics.  Despite the media’s push to build excitement, the murmurings of the public were shikata ga nai. A Japanese way of admitting both dismay and disinterest.

The press officer, a friendly Keio University professor, was the first to admit the ennui. He contrasted it with the excitement he recalled as a child when his family bought their first television set just to watch the 1964 Tokyo Olympics. His grandmother had never seen a television set before and marveled at the miracle of watching the games as they were being broadcast into their home.

Scroll ahead to 2021 where something almost as extraordinary has occurred, beyond the wildest imaginings of the press officer’s grandmother. Besides the viewers who tuned in to watch the Tokyo Olympics on television, there were Facebook groups like Follow Team Israel, flurries of Twitter activity, and Whatsapp images straight from the games gone viral. Everyone is now a member of the mass media. Everyone can now be a member of the press.

In Japan, there’s a famous proverb: “Fall down seven, get up eight.” Against all odds, Tokyo pulled off the 2020 Games – albeit in a different year than intended – and put on a happy face that said the spirit of the Olympics is alive and well in Japan. And that the fans in Israel have a lot to cheer about.

About the Author
Born in Montreal and raised in New York City, Liane Grunberg Wakabayashi moved to Tokyo to work for The Japan Times after receiving her MFA from Columbia University. She lived in Japan for 30 years, creating an art business, raising a family, and writing extensively about Japan and her growing Jewish identity. In 2017, she moved to Israel with her two children and made aliya soon after. Excerpts and themes from her true life story, The Wagamama Bride: A Jewish Family Saga Made in Japan, have appeared in The Jerusalem Post, Tablet, The Jewish Forward, Chabad.org, Lubavitch International Magazine, The Japan Times, Kyoto Journal, and Asian Jewish Life Magazine.
Related Topics
Related Posts
Comments