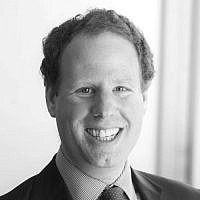 The Blogs
Hugo Bieber
Apply for a Blog
Advertisement
Please note that the posts on The Blogs are contributed by third parties. The opinions, facts and any media content in them are presented solely by the authors, and neither The Times of Israel nor its partners assume any responsibility for them. Please contact us in case of abuse. In case of abuse,
Report this post.

The start-up landscape has changed dramatically over the last decade with both opportunity and challenge for companies. Practically speaking, it’s never been easier to start a new business due to resources available through cloud computing. But, due to the strength of the major incumbents best known as the FAANGs (Facebook, Amazon, Apple, Netflix and Google (Alphabet), it’s also never been more competitive.

I’ve been interacting with Israeli start-ups on a daily basis over the last six years and have seen an evolution away from start-up towards scale-up. In the past, Israeli founders were well known for early exits, maybe in the $5-15m mark whereas now, we see companies raising later rounds of financing with valuations in the $100m’s and even unicorn (over $1bn).

The UK has become a key destination for Israeli scale-ups seeking international growth. In the year following the Brexit referendum, 32 Israeli companies set-up offices in the UK creating 888 jobs. The connectivity of the UK and in comparison to the US, short flight times and a two hour time difference with Israel, makes the UK an international hub for foreign companies.

This all raises a significant question: how is Israel continuing to nurture so many high-quality tech companies, and why is the UK such a key partner?

The British and Israeli high-tech eco-systems are highly complementary. Israel is seen as the ‘Silicon Valley for the rest of the world’, with a highly skilled workforce developing deep technology for a global market. Whilst companies like Facebook and Google are growing their engineering base in the UK, we see a significant number of foreign technology companies use the UK firstly for their sales and marketing operations.

With most of the world’s banks having a presence in London, the UK is probably the only global location where companies can sell to banks from the US, Europe, UK and Asia all in one city. London is a global FinTech Hub and Israeli FinTech and innovation particularly around security, fraud and payments is playing a key role.

Israel is rapidly emerging as global centre for digital health. With the convergence of four key pillars – data; data analysis; research expertise and venture money, I expect to see digital health as the biggest thing yet to come from Israel and the UK stands to benefit hugely from this.

For the last twenty years, the Israeli health insurers have had full digital records on all patient interactions from pharmacy to doctor’s surgery to scans and tests through to surgery and hospital admissions. Israel has a long history of expertise in biomed and pharma research in particular through globally recognised research-led universities such as the Weizmann Institute; The Hebrew University; Technion and Tel Aviv Universities and this expertise combined with more recent advances in AI and Big Data processing are bringing about game changing developments.

The final pillar is the money. Earlier this year, venture capital fund aMoon announced a $660m second fund (the first fund was $200m) dedicated just to investing in Israeli health-tech and life sciences. To put this in context, most Israeli VC funds tend to raise between $100m and $200m per fund to invest across multiple sectors. Additionally, the Israeli government has announced a $300m programme to support HealthTech in Israel.

Where does the UK fit in to this? The NHS is on the lookout for new innovations which can save money and improve the patient experience. Companies like Healthy.io and Zebra Medical Vision are perfect examples of digital health companies helping in these respects, decreasing the time taken by over-stretched staff to do their jobs; bringing about quicker patient outcomes and cutting waste. Our HealthTech Forum has seen attendees double at the first three events, as we assemble key NHS professionals; commissioners; investors and the private sector.

There is no question that the UK market is a key component in Israeli companies’ overseas strategy, and a key foothold to global expansion. When you consider the strength of this relationship over past decades, coupled with Israel’s developing infrastructure and talent, I see no reason why this pattern will not continue to flourish.

On 26th June, UK Israel Business (UKIB) is bringing some of Israel’s most exciting scale-up companies to London for a half day Summit hosted in partnership with Amazon Web Services (AWS). Each year UKIB carefully curate the companies invited to present on the basis of the impact it believes they will have over the next decade and beyond. In attendance will be Israel’s most disruptive companies a cross AI, Big Data, BlockChain, Cyber Security, e-commerce, HealthTech, Quantum Computing.

Tickets can be purchased here

About the Author
Hugo Bieber was appointed Chief Executive of UK Israel Business in June 2013. UK Israel Business is the go-to bilateral business network, and as Chief Executive, Hugo provides members with valuable commercial connections and facilitates investment in both countries to drive economic growth. UK Israel Business represents the interests of members to key policymakers and utilises a network of over 2,000 companies and 10,000 business people to provide them with the information and contacts to help their businesses thrive. Hugo was previously in charge of marketing for the European Financial Advisory Services group at a US Investment Bank in London and prior to that, worked for the CEO & CFO of an AIM listed real estate company acquiring businesses. Hugo started his career in consultancy after graduating from The University of York with a degree in Management and IT.
Related Topics
Related Posts
Comments