The Blogs
Diane Weber Bederman
Apply for a Blog
Advertisement
Please note that the posts on The Blogs are contributed by third parties. The opinions, facts and any media content in them are presented solely by the authors, and neither The Times of Israel nor its partners assume any responsibility for them. Please contact us in case of abuse. In case of abuse,
Report this post.

In 1928, Sigmund Freud noted that if we did not have religion — Judaism and Christianity — we would need another set of rules to keep us from self-destructing; from not only coveting our neighbour’s wife but having an affair with her. We would steal and lie; we would gossip and destroy others with evil words. We would murder in the name of revenge.

Freud is famous for his introduction of psychotherapy in which he talked about the repercussions of repressing and suppressing feelings and actions. Ethical monotheism, the ethic the Jewish people brought out of the desert into the light, requires that we repress and suppress many of our baser animal instincts if we are going to live in a compassionate, civil society. Without that repression and suppression we would remain bloodthirsty and vengeful.

Ethical monotheism became the foundation of Western civilization. This ethic was revolutionary at the time and remains evolutionary, today.  Sadly, today, too many of us have no understanding of the root of our extraordinary culture. Too many have lost the connection between the teachings in the Bible and the very freedoms we have in the West. As we belittle religion we lose more of that connection. We begin to think that all people have the same values as if values were universal rather than particular to the culture.

Not only are we under attack from those who hate  our way of life, our Western culture is crumbling from internal pressures: from idolizing tolerance, inclusion and accommodation to the point that point that we welcome beliefs, customs, and rituals that undermine our democracy — in the name of democracy!” 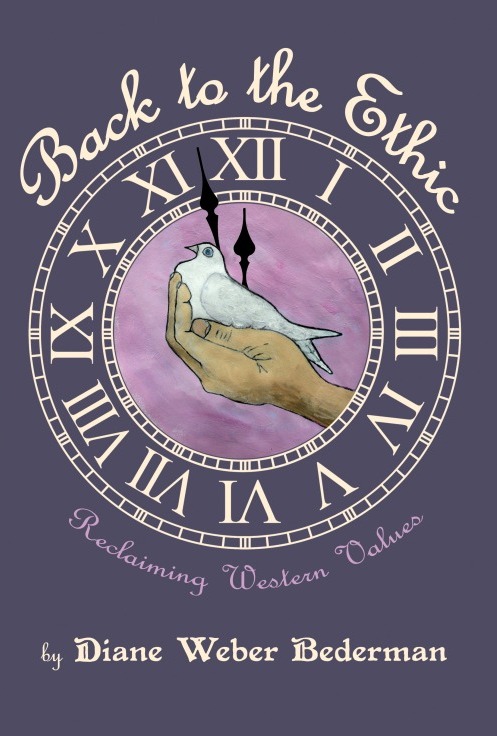 Here is an excerpt from Back to the Ethic:Reclaiming Western Values

“If we are going to preserve the freedoms we now take for granted we must return to the teachings of ethical monotheism, to words that bear great fruit, because the foundation of Western democracy is ethical monotheism, the 3500 year old ethic which began in the desert, was brought into Israel, then expanded outward with the spread of Christianity through the Mediterranean then into Europe where the teachings were translated into English and brought to the new world. Countries that are founded on the Bible became functioning and then flourishing democracies.

“We are living in an era of dis-ease. Our belief systems are under attack from external threats of terrorism, and internal threats from the extreme policies of tolerance, inclusion and accommodation that open the door to behaviours that are anathema to our hard won western freedoms that sadly, too many take for granted. Taken to an extreme these policies of tolerance, inclusion and accommodation will lead to suicide-by-democracy.

“We are losing our connection to the foundation, the very root of Western civilization: ethical monotheism, the revolutionary ethic that came into the world 3500 years ago. Back to the Ethic: Reclaiming Western Values will reconnect you historically, philosophically, scientifically, sociologically and psychologically, to that ethic so that you make it your own, protect and defend it and pass it down to future generations.”

When freedom turns into nihilism, ignorance is accepted as “free choice,” the human body turns into a fashion model, family values are viewed as “old stuff” and caring for the mere existence of our next generation is only an option, Western culture is in danger. A culture which does not reproduce itself walks proudly into the museum.

“When freedom, the axis of our culture, is deliberately misused to destroy it, and our values, which for centuries enlightened the world are twisted they become a poison which we force ourselves to drink. Under the slogan of tolerance and inclusion we allowed cultures — which share very little with our own — to infiltrate into our societies, settle inside them, ferment and change them from within.

“We tolerate and welcome people who do not believe in tolerance, we grant freedom to people who openly preach against our freedoms, we equally accept men and women who do not believe that men and women are equal. Western culture, which once was the lighthouse for humankind, is turning into a self-destruction scheme which leads the world into a dark tunnel with a dead end.

“The deterioration of Judeo-Christian values, the demise of Western self-confidence and the nullification of the Western will to defend its culture and being, are all results of the same process. Diane Weber Bederman’s book is essential to understand the process which the Western culture is passing through that will bring it to its demise. Ms. Weber Bederman is a whistle blower, the boy whose finger is in the dam, and her book is a wake-up call for all of us.”

Israel is the light unto the nations, and like all Western countries, she has every right to defend that light from the abuse of tolerance, accommodation, and inclusion.

About the Author
Diane Weber Bederman is a multi-faith, hospital trained chaplain who lives in Ontario, Canada, just outside Toronto; She has a background in science and the humanities and writes about religion in the public square and mental illness on her blog: The Middle Ground:The Agora of the 21st Century. She is a regular contributor to Convivium: Faith in our Community. "
Related Topics
Related Posts
Comments