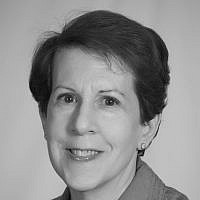 The Blogs
Ellen Roteman
Apply for a Blog
Advertisement
Please note that the posts on The Blogs are contributed by third parties. The opinions, facts and any media content in them are presented solely by the authors, and neither The Times of Israel nor its partners assume any responsibility for them. Please contact us in case of abuse. In case of abuse,
Report this post.

God bless people like David Dabscheck.  People who keep on keepin’ on… in the face of blatantly biased reporting in the media, the tirades of anti-Israel activists, and accusations leveled against Israel that are so absurd they would almost be funny – if there weren’t hoards of people out there who actually believed them.

David visited Pittsburgh last week to talk about efforts to undermine the legitimacy of the state of Israel that are typically manifested through the actions of the Boycott, Divestment, and Sanctions – or BDS – movement and how we can help counter BDS’s impact.  He came at the invitation of our Community Relations Council (CRC) and, in the course of 48 hours in our fair city, he addressed eight – count ’em, eight – audiences.  But, more about that later.

First, I have to admit that I was wrong.  Completely, totally, utterly wrong.  And some of you may be wrong, too.

Somewhere along the way, I developed the apparently-misguided stance that facts and logic would prevail.   I thought the story of Israel – from the struggle for its establishment to its continuing efforts to live in peace with its neighbors in the region – made a strong statement.  I thought the very real security concerns – from numerous wars Israel fought to coping with the constant threat of terrorism – also made a pretty strong statement. Taken together, it seemed obvious that fair-minded people, whether inside the Jewish community or not, could disagree on this or that policy, but would come together as one in repudiating the outrageous allegations often thrown at Israel.

But, as much as it might perplex people like me that see this as obvious, it is also completely incorrect.

So, what’s wrong with countering anti-Israel accusations by reciting history and facts?  It doesn’t quite work, David insists.  Or more accurately, we typically talk to ourselves with messages we like to hear instead of understanding and speaking effectively to those audiences we need to reach.

To put all this in context, I’ll note that David Dabscheck is Deputy Managing Director of the Israel Action Network (IAN), an initiative of The Jewish Federations of North America and the Jewish Council for Public Affairs (the national organizations, respectively, of our local Jewish Federation and our CRC).  David is responsible for IAN’s continental strategy.

His very informative presentation that I attended (the fourth out of eight) focused on different approaches to advocating for Israel more effectively.  The old approaches, don’t work anymore (if they ever did).  Sad to say, 1948 is ancient history to most of the people slandering Israel’s legitimacy as a Jewish and democratic state – many of them on college campuses.  (So, apparently, is 1956… 1967… 1973…)  And my oft-invoked accounts of miraculous medical and technological advances that Israel has brought to the world don’t do the trick either.  (Evidently, some people think such talk is tantamount to saying, We’re better than you are.)

The war of words has changed.  For us, it’s no longer about justifying Israel’s actions, but about justifying her right to be a vital and dynamic society, a producer of products and goods, and a vibrant democracy that is managing many acute challenges that have toppled other nations.  For opponents of the Zionist enterprise, it’s about delegitimization, “…an effort to isolate Israel from the family of nations,” according to IAN’s website.  And the war of words is being fought with new strategies and tactics.

IAN has reinterpreted the concept of advocacy and committed itself to getting its messaging out and building understanding in new ways.  We need to get away from responding to the biased or hateful comments and instead pre-empt those comments.  We need to tell stories of Israelis, not Israel – and make it personal.  We need to build meaningful relationships and create a network of support to counter the network of naysayers being amassed against Israel.

This is a daunting challenge, if ever there was one.  The stakes are higher than ever before.  Undermining Israel’s economy and setting out to break the spirit of her people is, in its own way, just as bad – and potentially damaging – as waging other kinds of war.

He came with very impressive credentials.  But, more importantly, he came with “the fight in him.”  Although gracious and soft-spoken, he has a resolve about him that indicates he intends to keep on keepin’ on.  I asked him whether he ever gets weary of the uphill battle.  I don’t recall his exact words, but the message was clear:  as long as he feels we can win the fight – or at least some key battles along the way – he’s in it.

So, why did I start out with the sentiment that God should bless these people?  For one thing, because I can see the critical importance of having someone to tell us when we’re doing it all wrong – and someone who can help us find the right approaches to change minds and attitudes.  For another, even though this is a community-wide issue, I am not sure I have the energy.  Even those of us who do get it right probably don’t have the energy to make the rounds to countless communities.  Especially when someone expects you to speak eight times in 48 hours.

About people like this, I say, May they go from strength to strength.  They’ll need it.