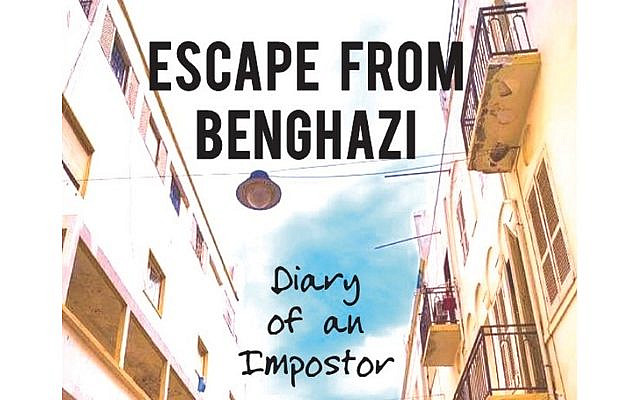 Nazis, kidnappings,  brawls, great escapes — Elia Meghnagi’ s autobiography Escape from Benghazi appears to have all the ingredients of a fast-paced adventure story. Sometimes it is hard to believe that what he writes is not fiction.

The subtitle is ironic — Diary of an imposter. If any community were emphatically not imposters, it was the 2,000 year-old Jews of Libya, whose presence predates the Arab Muslim conquest.

Libya was an Italian colony when Elia was a baby in Benghazi, the capital of the province of Cyrenaica, not far from the Egyptian border. He grew up  immersed in Italian culture, yet attached to traditional religious values,  in a city where half the population was Jewish.

Just before he was born in 1941, Elia’s community was subject to fascist racial laws. The Jews found an ingenious solution when they were forced to open their shops on the Sabbath. Anxious to avoid handling money, they inflated prices by 40 percent, urging customers to come back on a weekday.

Word War II was a dark time: Benghazi changed hands several times between the British and the Axis powers. The city was ravaged by bombing and looting. Ninety percent of the devastated community — Libya’s Jews numbered 38,000 — were to flee to Israel after the war.

The heroine of the book is Elia’s mother. Rather than let her son be treated by a “Nazi doctor” in the local  hospital, Elia’s mother, eight months pregnant, journeys the 650 miles to a Tripoli hospital to have a life-threatening carob seed dislodged from her son’s ear. Even after the war, German doctors in Libya presented a hazard.

Elia’s mother shows her mettle once more when she rescues a Jewish girl who has been kidnapped by an Arab youth.

Thanks to her strength of character, the family is spared deportation to Giado, the notorious desert camp where Arabs patrol on horseback wielding whips and swords. Some 500 Jews die of typhus or starvation — a fifth of the prisoners.

But not all Arabs are hostile, especially the older generation. During the war, the Meghnagi family find shelter with friendly Bedouins. And a human chain of Arabs saves them from a mob enraged by the Suez crisis in 1956.

The rising tension over Israel aggravates relations, and brawls between young Jews and Arab are almost a fact of life. In one such incident, Elia witnesses his younger brother Ever being beaten up by Arab youths. Elia runs to fend off the assailants with his lunchbox.

It was an episode which was to haunt him in years to come.

Even when the 17-year-old Elia wins a place to study telecomms engineering in England, his tribulations are not over. The Libyan government repeatedly demands that he return to his home country to face charges perversely accusing him of assault. An ill-advised visit to the Libyan embassy in London leads Elia to make a quick getaway out of fear he might be abducted.

In the second part of  the book, set in England, Elia typifies “the refugee made good.” He navigates difficulties with aplomb — statelessness and penury. He is forced to support himself and his family, bringing them in to England, while having to cope with his mother’s deteriorating mental health. It is hard not to conclude that her condition is connected to the traumas she has suffered.

Adaptable, versatile and resourceful, Elia meets all challenges with fortitude and humour. He makes a career in the corporate world and later becomes a director of the kosher food firm Snowcrest. He is the archetypal survivor. All’s well that end’s well: Elia becomes a fulfilled family man and a pillar of his Edgware synagogue and the wider community.

The book is a lively read, with jaunty subheadings and amusing anecdotes. The first part, set in Libya, is a particularly valuable testimony to a vanished world. After 2,000 years, no Jew lives there anymore.

Escape from Benghazi: Diary of an Imposter, by Elia Meghnagi. (Vallentine Mitchell, 2022)

About the Author
Lyn Julius is a journalist and co-founder of Harif, an association of Jews from the Middle East and North Africa in the UK. She is the author of 'Uprooted: How 3,000 years of Jewish Civilisation in the Arab world vanished overnight.' (Vallentine Mitchell)
Related Topics
Related Posts
Lyn Julius
Comments