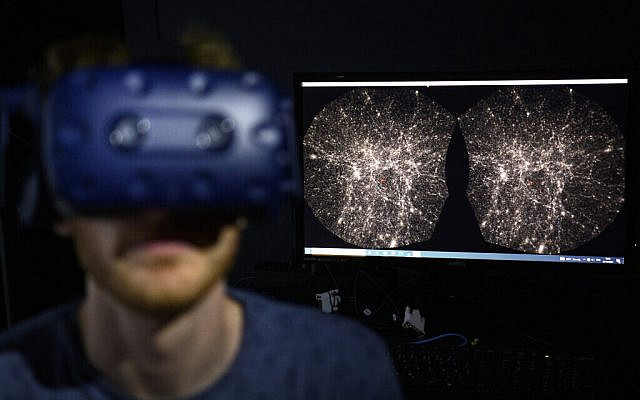 In this Oct. 12, 2021 file photo, Hadrien Gurnel, software engineer at EPFL's Laboratory for Experimental Museology (eM+) explores with a virtual reality helmet the most detailed 3D map of the universe with the virtual reality software VIRUP, Virtual Reality Universe Project developed by Swiss Federal Institute of Technology, in St-Sulpice near Lausanne, Switzerland. (Laurent Gillieron/Keystone via AP)

Mark Zuckerberg is constantly in the spotlight of science, technology and innovation news. The digital transformation does not cease and, day after day, technology brings us closer and closer to the future. Artificial Intelligence (AI) promises to be the protagonist of the “chip” change that will take humanity into the ineffable and inexorable future.

Meta, the name of the renewed technology, communication and information emporium of Zuckerberg’s companies, primarily Facebook, WhatsApp and Instagram, is leading the change. The metaverse, within cyberspace, shapes the new social and economic reality in principle, where human beings, by means of avatars, become pixels and enter into virtual competition or subsistence with their homogeneous counterparts.

Well, Meta recently presented the Research Super Cluster (RSC), the supercomputer developed by Pure Storage, Nvidia, among other companies, which would be able to bring to life the metaverse proposed by the creator of Facebook. With an unprecedented storage capacity and the highest and most sophisticated computational technology, this technological crusade is predestined to turn humanity into a new one. More than generational change, social change or transformation of the economic system, it will be the future, our future.

After the pandemic will come the new universe, the metauniverse. AI is no longer an idea of science fiction, nor is cyberspace, the metaverse and other fashionable terms. Augmented reality will allow flesh-and-blood human beings to walk the cyber-terrain, even in the most untamed and unexplored places there may be.

Augmented reality that will serve to bring about different areas, from games that will make participants feel a new reality in every sense, to new forms of shopping, education, personal growth and development, and even personal and emotional relationships.

This is what the next era of the internet will be. AI has the power to decipher almost any information, including the many languages that exist in the “real” world. Supercomputers like CSRs will have the ability to decode texts, images, videos, etc., in a matter of moments. On the other hand, everything will be more monitored and controlled, starting with the users.

It would seem that all the information in the universe as we know it will be reduced to this virtual universe. In fact, new concepts are beginning to be revealed that will end up becoming virtual commonplaces such as omniverse, i.e. the metaverse of experts that could even digitally replicate entire cities, countries and even the world we understand, according to the company Nvidia.

In addition, a significant number of companies are beginning to join these projects and are sure to have a place in the new virtual and cybernetic universe. According to this, the simulation universe would be the step to follow for these companies and the men behind them who are developing new ideas, almost at the speed of light. Welcome to the future.