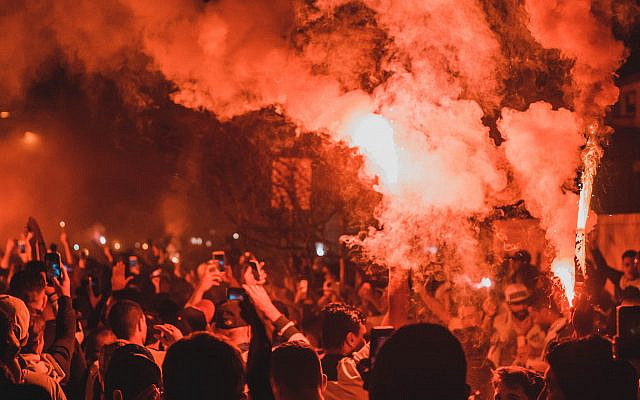 Now That's a Riot! (Free for Use Photo by Maurício Mascaro from Pexels)

Many years ago, as a teenager taking my first steps into the world of foreign travel. I found myself in Trieste.

Trieste, not unlike Israel, had a long and complicated history. Trieste had been occupied by Yugoslavia in 1945. In 1947 the United Nations established it as a free territory. In 1954 it was divided between Italy and Yugoslavia. By the time of my visit, it had been fully integrated into Italy. Hopefully, this is its permanent status.

As any self-respecting tourist should do, I made my way to the main square, the Piazza Unità d’Italia. It was packed with people. Before I could try my few words of Italian and ask what was the reason for this festive turnout, a man in a splendid uniform and a very impressive tricorne hat, climbed onto the steps at the head of the square and started reading from an ancient parchment.

I took out my camera to record this colourful ceremony but was quickly stopped by a local. He’s reading the Riot Act, I was told, you don’t want to be here.

As he finished reading, a large force of police entered the square and everyone ran as fast as they could.

Later that day, I got the whole story. The square’s occupants had been striking port workers and the police were a special unit for dealing with demonstrators, strikers, and other threats to public order.

The members of this unit were drawn from distant parts of the country, with no ties to the community in which they were to be unleased. They lived in isolated barracks where they practiced their skills with large, wooden batons, and looked forward to using them on as many heads as they could find.

France, too, has its police to keep clear of — the CRS, Compagnies Républicaines de Sécurité. We saw them in action in 1968, when demonstrations, general strikes, and the occupation of universities and factories threw the country into chaos.

I was reminded of these examples while watching our police being attacked by crowds of ultra-Orthodox Haredim in Bnei Brak. The police were not the only ones to meet with the crowd’s disapproval; reporters and photographers for major TV networks were attacked with a variety of objects, including rocks. The journalists, finding themselves unable to escape, had to ask store owners for shelter.

Israel is a small country. While no longer the “everybody knows everybody” country of the fifties and sixties, the chances of a Haredi rioter meeting his secular cousin the policeman are still too high for comfort.

If the Haredi leaders are unable or unwilling to control the hotheads in their communities, perhaps we should bring in some foreign riot police to do the job for them.