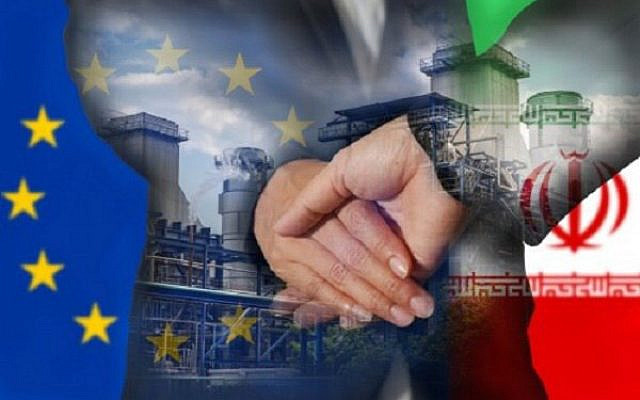 Any time the Khomeinist regime brings up the issue of “Islamic human rights”, they offer economic incentives in order to cover its crimes, avoid responsibility and diminish the human rights issues. Sadly, European countries therefore avoid broadcasting this fundamental issue in their national media and prefer to go on with business as usual.

To that end European media in general, covered a marginal aspect of the uprising. On the other had if a Palestinian is killed in the Gaza Strip, the news is widely covered for weeks on European national TV, radio, etc. and sometimes they even try to take the issue to the United Nations.

Ever since the mullahs seized power, violent human rights abuses happen on a daily basis in Iran. EU countries ignore the matter by issuing a statement and they eventually forget it and continue with their economic deals with the Islamic regime in Iran.

On November 25th, 26th, and 27th, Iranians in more than 100 cities peacefully protested the 300% hike in gas prices. This was yet another opportunity for people to take to the streets and protest the regime’s corruption, economic failure and financing terrorist groups in the region. In response however, the regime cut off the internet and killed protesters.

Amnesty International conservatively reports that more than 200 – and likely many more – have been killed; thousands have been arrested, most of whom are teenagers and adolescents.

According to the latest reports from inside Iran, about 900 people have been killed and 7000 injured, more than 13000 have been arrested and are being tortured under the worst conditions.

The number of victims adds increases on a daily basis and there is no international organization in Iran to verify the number of killed, injured or detained. Families of the victims are also under intense pressure and surveillance by the Islamic regime’s security apparatus.

Nota bene: Is it time for the EU to review their foreign policy, especially vis a vis the Islamic regime and start supporting the freedom movement of the Iranian people and stop supporting the Mullahcracy?

Another aspect of the disastrous foreign policy of the EU (Belgium, Denmark, Finland, The Netherlands and Sweden) is manifested in their interest in implementing the INSTEX, the financial life line designed to allow the European companies to trade with Iran while they bypass the United States sanctions.

Continuing their immoral policies toward the Islamic regime after the massacre of the Iranian people only encourages the regime to further repress Iranians. The EU appeasement policy tacitly approves the Iranian regime’s allegations that the Internet has never been shut down in Iran, while everyone knows that it’s not true.

The European Union as the cradle of democracy and human rights adds the number of INSTEX members instead of calling their ambassadors from Iran and holding the regime responsible for its atrocities.

The EU countries are well aware that the chaos, terrorist activities, conflicts and wars in the Middle East is caused by Iran.

An Iran without the Islamic regime can contribute to the economies of the Europe thousands of times more than an Iran with a corrupt, terrorist and cancerous regime that has not only spread the violence to the entire Middle East but also is a threat to the whole world.

No country is able to prosper and achieve democracy while in chaos … the current EU policies vis a vis the Islamic regime in Iran will not bring safety to Europe.

In the face of the EU’s silence, only one person defended the freedom movement of the Iranians, Charlie Weimers. In his speech in the European parliament he criticized the EU’s foreign policy and he told Federica Mogherini that : they (Iranian People) don’t want the Islamic regime … Iranians from around the world expressed their admirations for him in his public internet pages which shows that Iranian people in Iran and around the world want harsher EU policies toward the Islamic regime.