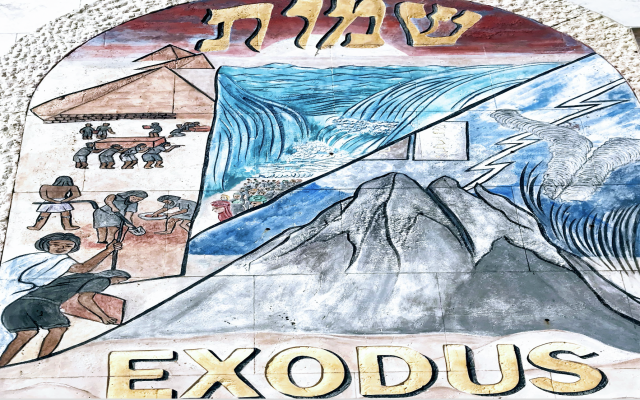 While G-d performed many tremendous miracles in redeeming us from Egypt, the Israelites needed to learn to be free men to fight for and determine their own fate in the Promised Land, and this is a similar story to the Jews’ redemption from the Holocaust and the founding of the modern State of Israel.

In this week’s Torah portion of Beshalach, Pharaoh finally lets the Israelites leave Egypt after the ten plagues culminate in the death of the first born of the Egyptians. However, Hashem hardens Pharaoh’s heart one last time, and Pharaoh chases after the Israelites and overtakes them at ״פי החירות״ (Freedom Valley) while they are trapped in front of the Red Sea (Exodus 14:9).

As we all know, G-d made a great miracle and split the sea for the Israelites to cross to safety, while drowning the mighty Egyptian chariots and army. Why isn’t the great destruction of the entire Egyptian army considered the 11th plague in finally extricating the Israelites from slavery in Egypt (i.e. why do we only refer to the 10 plagues)?

That is why the place that Pharaoh and his army overtook the Israelites was called ״פי החירות״ (Freedom Valley), because this was the turning point where the Israelites made a critical transformation from slavery to free people.  It was not only in the physical sense of crossing the Red Sea and leaving Egypt behind that the Israelites were freed, but also more importantly, in the spiritual sense. Physically, the generation of the slaves eventually died off in the 40-year journey in the desert, so a new generation of free men could go on to enter the Promised Land.  Similarly, spiritually, the Israelites went from a mentality of slaves to those of free people who recognized that it was G-d who is the true Master of the Universe.

And Israel saw the great work which the LORD did upon the Egyptians, and the people feared the LORD; and they believed in the LORD, and in His servant Moses. (Exodus 14:31)

We see the Israelites continue to mature and transform in the Torah portion, when the evil Amalekites rise up and attack the Israelites. This time the Israelites do not complain against G-d, like at the Red Sea, about why G-d brought them out from Egypt and that “it would have been better to be slaves in Egypt than to die here in the Desert.” Now instead, they “prepare for battle” and fought Amalek by the sword, and with the help of Hashem (i.e. when Moses raised up his arms in supplication to G-d), the Israelites prevailed. If you but image the juxtaposed images of the Israelites leaving Egypt as slaves and then metamorphosing to free men at the miraculous crossing of the Red Sea, there is a very important message of G-d’s redemption of us in both the physical and spiritual realms.

Interestingly enough, this critical image of transformation of the Israelites going from the very depths of slavery to the lofty heights of redemption, the giving of the Torah on Mount Sinai, and going to the Promised Land is relived again in our very own times.  This happened immediately after the Holocaust, when the Jews left the death camps of Europe (in fact, many coming by boat over the Mediterranean Sea instead of on foot over the Red Sea as in biblical times) to come to Israel.  Here too, the Jews went on to fight as free men in the War of Independence for the founding of the State of Israel just like the Israelites fought the Amalekites in the desert and the Seven Nations to receive the Promised Land of Israel.  Furthermore, just like we received the Torah after the redemption from Egypt, we are seeing an incredible resurgence of Torah learning in Israel today.

In both cases of redemption, we had to transform from being victims of slavery and persecution to instead taking the reins in our hands, and with Hashem’s help, determining our own destiny and becoming the victors!  Incredibly, just as the Israelites were redeemed by Hashem from Egypt and brought to conquer the Promised land 3300 years ago, so too were we, Jews, brought from the ashes of Auschwitz to the shores of the Israel to fight and become “a free nation in our Land, the Land of Zion, Jerusalem” (Hatikvah).  And just like the redemption from Egypt resulted in the building of the Mishkan (Tabernacle) to worship Hashem in the desert, so too will we soon relive the redemption in the rebuilding of the Temple in Jerusalem. Again, in the right time, we will need to have faith and courage to rebuild it with our very hands, and this will happen speedily and truly in our days. May Hashem let it be!