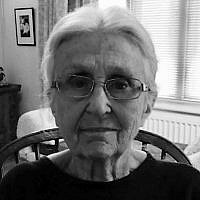 The Blogs
Marylou Grimberg
Apply for a Blog
Please note that the posts on The Blogs are contributed by third parties. The opinions, facts and any media content in them are presented solely by the authors, and neither The Times of Israel nor its partners assume any responsibility for them. Please contact us in case of abuse. In case of abuse,
Report this post.

In August 1945 260 Jewish boys and 40 Jewish girls arrived at Calgarth Estate, near Windermere. These were no ordinary children. They were survivors of camps in Nazi dominated Europe. The British government had agreed to grant entry to the UK to a 1,000 such children, but only 732 were found. The majority were boys. Little girls had no value or future as slave labour.

The 300 who were brought to Windermere started to feel alive again, although from caution or fear they tended to hide food at mealtimes to be eaten later, but as they began to find their feet they also ran a little wild, even ‘borrowing’ bicycles wherever they found them. The local people were understanding, tolerant and kind.

Almost seventy years later, in January 2015, Ben Helfgott, one of these survivors returned to Cumbria, to Kendal, to present the community with a candle to be lit in commemoration of the liberation of Auschwitz. He said of the Southern Lake District : ‘This is where I was reborn.’

The Jewish connection with Cumbria, therefore, is historic and significant. When later that same year so much of the area, including Kendal and Windermere, was repeatedly flooded perhaps this should have been of more concern to the Jewish community. Almost certainly some individuals gave generously, but communally we did little.

The Muslim community responded more vigorously. Muslim charities and Mosques raised funds. Members of Muslim youth groups travelled to Cumbria to help flood victims clear debris, move furniture or do whatever else required youth and strength. The Sikh community also became involved in neighbouring flood-damaged West Yorkshire, setting up open air facilities where they served hot meals to the exhausted and the hungry.

IsraAid, an NGO Israeli aid agency, did send a handful of volunteers to flooded areas causing morale-boosting astonishment and amusement among those they helped. As far as I can gather, that was the most significant aspect of any wider Jewish involvement, and it originated not with British Jews, not in our synagogues and youth organisations, but in Israel.

We come now to the Manchester atrocity, perpetrated by a follower of another perverse ideology. The Sikhs immediately opened the doors of their temples to offer food and shelter to the stranded. Jewish volunteers were also out there, with blankets and hot drinks, even setting up a lunch stall, but what are we in the rest of the community doing?

Some of the victims’ families have lost a breadwinner, some have lost a mother and must make costly arrangements for alternative child care, some have a family member with life-changing injuries. Yet others are devastated by grief, their lives so disrupted that normal work is impossible. Many of these people need not only our symbolic solidarity with them, our minute’s silence, crucially they may also need financial help.

The Red Cross, in partnership with Manchester City Council, has launched the We Love Manchester emergency fund to offer to the victims and their families whatever support, practical or financial, they may need.

My suggestion is that readers of Jewish News (and their friends and relatives) donate to that fund. In this particular instance we may not have the same significant connection with Manchester as we do with Windermere, but Britain is our home. The stricken families are our countrymen.

My hope is that when future disasters – natural or otherwise – strike our compatriots we, as a community, will be better prepared. Let’s organise for that future.

About the Author
Marylou Grimberg lived in Singapore for 17 years, where she was introduced to the world of publishing, and was also persuaded to write a book on the games of Asia. On returning to the UK, once her five children were more or less self-sufficient, she went back to school and obtained a PhD in Linguistics from UCL. She lectured for a while at the University of Hertfordshire, but on retiring went back into the publishing world, working in a voluntary capacity with the editorial teams of various Jewish organisations.
Related Topics
Related Posts
Comments