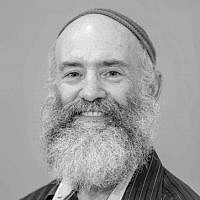 The Blogs
Yehoshua Kahan
Apply for a Blog
Please note that the posts on The Blogs are contributed by third parties. The opinions, facts and any media content in them are presented solely by the authors, and neither The Times of Israel nor its partners assume any responsibility for them. Please contact us in case of abuse. In case of abuse,
Report this post.

The tefillin worn on the head (henceforth, “shel rosh”) differ in a number of respects from the tefillin worn on the arm (henceforth, “shel yad”). One of the differences is this: Though both must contain the four passages in the Torah which make mention of the mitzvah of tefillin, the shel yad has all four passages written on a single parchment, in the order they appear in the Torah, rolled up and placed in the single compartment of the shel yad. The shel rosh, however, is constructed such that it has four small compartments side by side. Though these compartments appear to be tightly bound to one another, in fact, they are almost actually completely separate from one another. They only join at a common base, like the fingers of one’s hand. Into each compartment is placed one of the four passages, written on four separate parchments.

Here is a list of the passages, in the order they appear in the Torah:

Since they are written on separate parchments the question arises: in which order should they be inserted into the four compartments of the shel rosh This question is raised and argued in the Talmud (Menachot 36b):

Our Rabbis taught:  What is their order?  Kadesh Li and V’hayah ki y’vi’acha from the right; Sh’ma and V’hayah im Shamoa from the left.

But wasn’t it taught exactly the opposite?!

Rav Hananel said that Rav said:  if one reverses the order, the tefillin are invalid.

Wait, this is confusing – what is the order of the passages of the shel rosh? Rashi says: They are placed in the order they appear in the Torah, as above: 1,2,3,4. Rabbenu Tam, Rashi’s grandson, says otherwise: the order is 1,2,4,3, since it says “from the right” and “from the left”.

Both Rashi and Rabbenu Tam find support for their approaches by emphasizing one or another section of the passage above, as well as from numerous external sources, elsewhere in the Gemara as well as elsewhere in the classic corpus of Jewish tradition. We rule in accordance with Rashi, but many, especially in the Chasidic and Sephardic communities, have the practice to fulfil the mitzvah of tefillin also using tefillin made according to Rabbenu Tam’s approach.

Though I am neither Sephardi nor a Chasid, I do find  symmetry which informs the approach of Rabbenu Tam powerfully attractive. For, as Tosafot mention, when the passages are inserted according to this approach, the “havayot” (that is, the two instances of the word “v’hayah” – and it will be – which begins passages 2 and 4) occupy the adjoining middle two, “protected” compartments. As our Gemara concludes, there does seem to be some sense of “inner” and “outer” passages. Further, as the word for being is also, in a different form, the word for Being (Hashem), it is fitting that they be together.

Symmetry characterizes almost everything holy – consider the construction of the vessels of the Holy Temple – the menorah, the Holy Ark with its cherubs, the table for the “facebreads” (lechem hapanim) are just a few of the items constructed with careful attention to symmetry. And, in the ultimate evocation of symmetry, we are told in a passage in Berachot that Hashem also wears Tefillin (however we are to understand that). And the passages of Hashem’s tefillin are all praises of Am Yisrael!!

So, although as a “good misnaged”, I don’t personally use tefillin of Rabbenu Tam, I am drawn to what they evoke. That the shel rosh is a unity of four separated, yet not entirely separate, elements has led some to interpret what that symbolism might be. Rabbi Yehoshua Falk (in his commentary on the relevant passage in the Tur) asserts that they represent the four senses which are located in the head: seeing, hearing, smelling and tasting. Feeling, he says, is represented by the shel yad. Performing the mitzvah of tefillin, then, is binding and devoting those senses to Hashem.

I would like to “take his idea and run with it”. We know that since time immemorial, human beings have created symbolic representations of bodies, limbs and organs, both external and internal. The most famous representation of an inner organ is the ubiquitous heart-shape. Now how did they know what a heart – even a stylized heart – looked like?  It seems that our ancestors, on occasion, had reason dissect both animal and human cadavers, and they were certainly familiar with basic human anatomy, if not full organ function. If they knew the structure of the heart, they knew the structure of the brain.

And the brain (that is, the cerebrum, the largest and by far the most prominent part of the human brain) is comprised of four lobes – the frontal, temporal, parietal and occipital (the limbic lobe is interior, and only named as such in the late 19th century by Broca). The lobes adhere to one another, but are actually separated from each other along fissures, except at their bases, where, in the inner regions, they are connected. Each lobe performs a variety of distinct but (perhaps) related functions. Taken together (which is what our brain is and does), they generate our minds.

Mind is, then, (or at least, presents itself as) an emergent property of the brain. By wearing our “brains” on our heads, we are declaring that the “whole of mind (whose evocations of being – havayot_- lie in the center of the Rabbenu Tam tefillin) is greater than the sum of the (four) distinct parts (lobes)”. We are raising up and binding to Hashem not only the four head-based senses, but the entirety of our mind, our consciousnesses, our wills-to-be. (Note that, kabbalistically, Will is “outbodied” to the soul levels above our heads, which have yet to come into our lives). And since an emergent property, as phenomenon, remains a part of that which generated it, then, just as brain generates mind, mind impacts brain. And when we also reflect upon the assertion that Hashem (perhaps the “reader” mentioned in the Gemara in Menachot) wearing tefillin, that symmetry-become-wholeness is then taken to an entirely different level.

May we yearn to reach that level of awareness, of mindfulness, of appreciation of being part of the symmetry so that whether we wear them or not, we embody the emergent “many-become-one” dynamism that is the battery powering the tefillin as envisioned by Rabbenu Tam.

About the Author
Born and raised in L.A. in an idiosyncratic Jewish home, BA in physics, and a life-reorienting Year Abroad in Israel which launched me on a path of exploration and commitment, leading through many Jewish worlds and connecting me with a rich and seemingly irreconcilable panoply of Jewish souls. Years and years of teaching Torah and listening to, learning with, counselling and sharing with people searching high and low have been followed and enriched by work in the world of hi-tech. Everything made possible by my family - my beloved wife and the children and grandchildren with whom Hashem has blessed us.
Comments