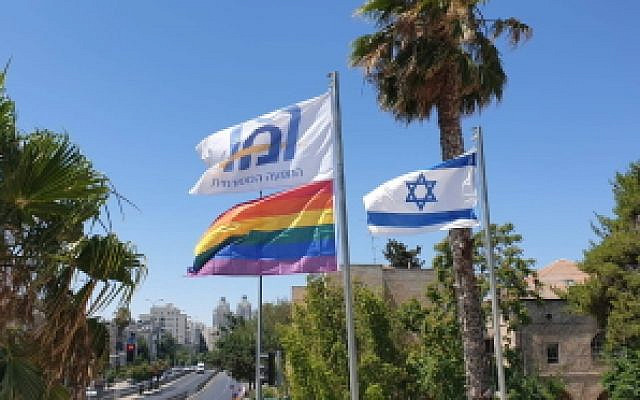 As much of the western world has come to better understand human sexuality, acceptance of Gay men and women has become far more common than it was just a few years back. Indeed, much of the opposition to a “Gay Lifestyle” now comes from religious communities. This may be out of deep religious beliefs that non-heterosexual sex is immoral or prohibited. It may be religion serving as a cover for hatred or discomfort.

The Bible seems to refer to anal intercourse as an abomination. It is simply prohibited. “A man shall not lie with another man as he does with a woman.” To be fair – the exact meaning of the verses that relate to homosexual relations are open to interpretation. Nonetheless, homosexual relations within religious Jewish communities, in particular the mainstream Orthodox world, have been understood to be prohibited. Lesbian and Gay people have been, and still are, excluded.  Exclusion is even greater for those in the Trans community. Some cope by remaining in the closet. Others leave the traditional world. Still others have found that Gay synagogues could serve their needs.

Even in Israel, a country often thought of as fairly progressive with regard to Gay rights, civil laws continue to be discriminatory in too many areas. Perhaps old habits die hard. Perhaps the influence of Orthodox lawmakers cannot yet be overcome.

Some of the most hateful of statements with regard to the LGBTQ community have come from so-called leading rabbis.

Recently, one prominent rabbi broke the mold in a position paper he published on his Facebook page called, “It is Not Good for Man to be Alone.”  Rabbi Benny Lau, a leading figure in the more progressive Orthodox world, made an effort to strike a balance between welcoming Gays into religious (read: Orthodox) communities while continuing to uphold the prohibitions of the Torah, as he understood them.

Rabbi Lau rejected the idea that those attracted to others of the same sex should be pressured into heterosexual marriages. He recognized that same sex couples may also raise families. He rejected “conversion therapy” designed to cure one of their feelings and change the sexual orientation. He demanded that all people be shown respect and dignity.  He did not go so far as to find a way to permit homosexual sex nor did he offer to find a path toward same-sex weddings.

Lau’s approach should be considered a big step, a courageous step, forward in the Orthodox world. His position received wide publicity just because so few Orthodox leaders have been willing to speak out for acceptance.

Lau correctly points out, “Our religious world is always built on two levels: The ideal Torah level and the reality of the world as it is… It is an encounter between the world of ideas and the world of reality, between the eye that rises to the sky and the encounter with the person who lives in my environment.”  Lau continues, “Those who want to worship God in the world in its entirety should get used to holding in his hands both the ideal Torah and reality and live with both.”

Yet, in so many ways, Lau’s thinking reflects the thinking within the Masorti/Conservative movement of thirty years ago.  Back then, theologians such as Rabbi Elliot Dorff, wrote of the centrality of the concept of Kvod HaBriyot (human dignity) and that many of the restrictions on homosexual conduct were simply inconsistent with human dignity as understood today. Even back then Conversion Therapy was decried.  Dorff wrote, It’s not an all-or-nothing thing in his pastoral letter “This Is My Beloved, This Is My Friend.”

The Rabbinical Assembly’s Commission on Human Sexuality showed awareness of changing sexual practices even as it upheld the importance of honesty, fidelity and modesty. The commission’s report recognized that “Committed, loving relationships between mature people who strive to conduct their sexual lives according to the concepts and values spelled out in the report” bring holiness into the relationship.

Our tradition recognizes that the Mitzvot are intended to “Live by them.” The Mitzvah cannot be fulfilled if it causes a person harm. Maimonides writes, “The greater the sage is, he must be more cautious how he conducts himself and go beyond the letter of the law when he deals with others.”

Rav Lau has done just this. He has gone beyond the letter of the law even as he has remained within the values of our Torah.

But there is still a long way to go.  Blu Greenberg once said, “Where there’s a rabbinic will – there’s a halachic way.”

The Masorti/Conservative movement toady recognizes that we do not live in a binary world. Sexuality can be fluid. Members of the LGBTQ community must feel safe and welcome, as Lau writes. But that simply does not go far enough.  Today, within the Masorti movement we ordain out Gay clergy. We officiate at same sex marriages. We convert infants born to same sex couples with the help of surrogate mothers. There is still work to be done but that work is front and center of our agenda.

The verses of the Torah must always be subjected to new understandings and new insights. The Pshat is one aspect to Torah understanding – but not the sole meaning to its verses. The Jewish legal process allows for  what Rabbi Gordon Tucker describes as “an expansion of the Halachic process”.

All praise is due to Rabbi Beni Lau. May he, and others, be blessed with the strength to move further in understanding, and implementing  Kvod HaBriyot – human dignity into our religious Jewish practice.

I conclude by citing the words of Rav Avraham Itzhak Kook, as quoted in a responsum, by Rabbis Elliot Dorff, Daniel Nevins, and Avram Reisner, “The light of the Messiah, when it blazes in the heart, teaches one to dignify all people: “It shall be on that day that the root of Jesse will stand as a sign to the nations, and peoples will seek him, and his consolation shall be dignity.” (Isaiah 11:10).