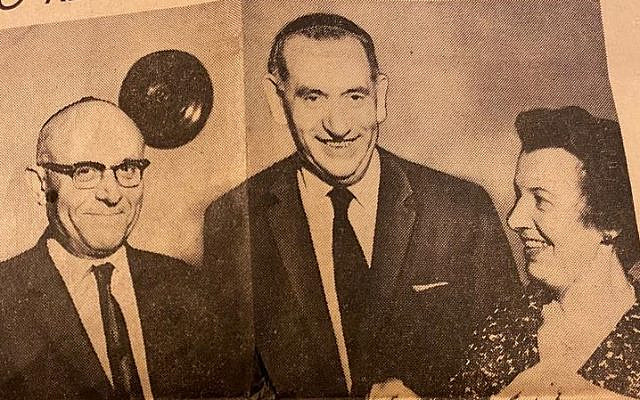 In the scrapbook of family lore, there is a picture set against the backdrop of Israel of the 1960s. It is of three distinguished middle-aged men in suits, slightly balding, with their arms linked together and squinting at the strong Tel Aviv sun. It is a picture taken of my grandfather, Isadore, and his two brothers, Mendel and Joseph. They had just met each other for the first time in 40 years.

The reunion took place in 1964 — more than 58 years ago. My grandfather Isadore came to Israel in style sailing on the Queen Elizabeth with my grandmother, Amy. Joseph flew from South Africa and Mendel had his home in Tel Aviv. Their paths had diverged in the years immediately after the First World War.

My grandfather and his six siblings had been orphaned in a small shtetl called Przemyślany during World War I. Their father, a soldier in the Russian army, was killed in battle. Their mother, soon after, was murdered in a pogrom. She was killed by a Russian soldier while standing in a bread line waiting for food to feed her seven children. The orphaned siblings, ranging in age from 2 to 12, steadfastly and with determination stayed together. Six-year-old Esther was in charge of cooking and watching the younger children. Twelve-year-old Isadore and 11-year-old Joseph were the breadwinners. They would go to the battlefront each week to sell cigarettes and religiously come home every Sabbath.

There is a portrait painted in our family memory of little Esther standing on a stool and stirring a pot of whatever she had to make into a Sabbath meal. In my vignette, she has paused briefly to welcome her two big brothers who had arrived home to greet the Sabbath queen. For Melave Malka on Saturday evening, the family rolled cigarettes – producing the goods Isadore and Joseph would need for the week ahead. After the war, the neighbors had time to discover how this young family had managed on their own. The younger children were sent to the orphanage of Janus Korczak. Isadore, Mendel and Joseph were teenagers; in those times, old enough to make it on their own.

Joseph went to Israel to become a pioneer. By the late 1920s, he followed a girl to South Africa where he built his life. Mendel remained in Europe and survived the concentration camps as a dentist to the Nazis. For a pulled tooth he had saved many Jewish souls. After the War, he made his way to Israel where his two brothers, sending cash through aerograms, helped him build a dental practice. Isadore, my grandfather, went to America — to Seattle, Washington. There he built a synagogue and a school and made sure that his two boys, William Michael and Bertram Manuel (Velvel and Mendel), became both learned and educated.

For 40 years, the brothers, Joseph, Mendel and Isadore, wrote letters to stay connected. I am not sure who suggested the reunion and marked 1964 as the moment in which it was to take place. I am also not sure that I can imagine the words that were shared to catch up on 40 years of missed memories or the extent to which they reminisced about their shared past. But I can see in my mind’s eye the picture of these three brothers whose proud visages belied their humble yet heroic roots.

I am sure that all of you reading this have your own stories of families coming together here in Israel. Reunited here. Celebrating here. Proudly making Aliya here. Personally, I have just moved here — following my children, who have served in the army, studied here, and made aliyah on their own here.

I am also part of a community in Southfield, Michigan that in the past decade has sent more than two dozen lone soldiers here and now has dozens of young couples and dozens of grandchildren here. But my friends, their parents, cannot come here. And now I cannot go there — to my parents, my other children, my granddaughter, my siblings and my friends.

It could not have been simple to orchestrate my grandfather’s reunion in 1964. The irony is that in this age of high tech, drones and light rails that meander through the ancient city of Jerusalem, we, once again, are having difficulty arranging ours.

But we cannot give up.

“And G-d says to Aaron go greet Moses in the desert, and he met him at the Mountain of G-d and they kissed.” (Shmot 4:27)

Said Rabbi Pinchas in the name of Rabbi Reuven “have you ever seen in your days that one man [after 60 years] goes from the North and the other from the South and they meet [in the vast desert] without having made a sign?… It can only be because G-d spoke to each and brought them together.” (Midrash Shmuel 279)

With G-d’s help and with G-d’s word, may we also all be together soon.