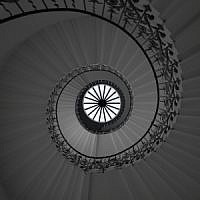 The Blogs
Sara Shamansky
Apply for a Blog
Please note that the posts on The Blogs are contributed by third parties. The opinions, facts and any media content in them are presented solely by the authors, and neither The Times of Israel nor its partners assume any responsibility for them. Please contact us in case of abuse. In case of abuse,
Report this post.

What kind of a conference doesn’t serve coffee? A Jewish conference, I find out, as I stumble, red eyed, through the bustling fake marketplace of the Jewish Federations of North America’s General Assembly.

Booths offer candies and pens to lure in the innocent, and keep them captive for the big pitch. Sadly, caffeine is nowhere to be found. (If I ever have a booth at the GA, I know what I’ll be pouring. Fellow addicts will come flocking.)

I am surprised to spot a man in a long beard, paired with curly payot (side-locks). He seems comfortable, not out of place at all. I try to read his name tag, see where he comes from. He disappears into the crowd.

Our group, a bunch of Rabbinical Students and their wives from Yeshiva University’s Gruss Kollel in Jerusalem, nervously prepared for the GA. It was our first time at an event of this kind, and we weren’t quite sure how to dress, what would be expected of us in terms of mixing and mingling. We were hung up on how to best represent Orthodoxy at the JFNA’s “big show.”

But now, around me, I see not only a solitary beard, but a sea of kippot and head scarves, proud badges of Orthodoxy. I’m surprised, disappointed in a way. I was prepared to be different.

It was a logical question, for a bunch of students in their twenties, talking about a Jewish Federation system that has been around a hundred years.

But when Oren, chosen as a “young leader”, sits onstage and compares the Federation to a minivan, because “it has the capacity but he hasn’t seen one in a few years,” I hear that question echoed. And I’m surprised again.

The GA is certainly doing a lot to engage the next generation of Jewish leaders. From the trying-to-be-hip disco music playing in the background as Federation presidents walk on stage to a feed of Facebook questions projected on a screen behind 90 year old Shimon Peres as he spoke; from the flocks of Birthright and Masa participants to the social network icons on the GA homepage; and, of course, the “Under 45” sessions (the young age of 45 is the Federation’s telling criteria for “youth”). The Federation did seem to be reaching out to the next generation.

But in an old fashioned way.

There were no questions. There were panels during which we sat around a table and debated, but only during dedicated sessions. When I attended a session to hear a specific speaker, I wanted to ask, question, contribute. But instead the speaker left the stage, and I stayed silent. We all remained silent. Maybe that’s how it used be done, but today, in a world where Twitter is replacing newspapers and YouTube is replacing TV, I find it hard to blindly listen to a broadcasted message.

There are two men and three women on the young leaders panel. One of the men is wearing a Kippah, but none of the women identify with Orthodoxy. I wish there was an Orthodox woman on the panel, too. I find it ironic that in such a liberal setting, the voice of the Orthodox woman is suppressed.

The session on Charedi Jews in Israel again chooses to ignore women, explicitly stating that only the question of employment for men will be addressed. Again, I am disappointed. When discussing the economic fabric of Chareidi society, it seems strange that Chareidi working women, who often reach prestigious careers in their roles as the main breadwinner of the family, are so easily dismissed.

Despite the fact that the GA is actually situated in Jerusalem this year, I’m not really in Israel. I see this not only in the orderly line queuing up for brown lunch bags and the polite silence when Peres compared the initials of General Assembly with General Electric, but also by the bubble that forms around us, a protective bubble which allows us to leave our differences outside the conference hall.

The auditorium fills with a wave of applause when Labor Chairman Shelly Yachimovitch announces her Knesset bill for Civil marriage. Applause erupts again when Israeli darling Yair Lapid speaks of his wish to empower the Reform movement in Israel. And debates rage fiercely in panels on controversial topics such as Women of the Wall and Civil marriage.

But when you leave out the politics and stay away from the latest storms blowing, there’s a lot left. We sat in a circle, a group of GA participants, and when I try to remember them now I remember only their faces and the views they shared with us, not their titles, not their affiliations. Because at the GA we are all just people, just Jews.

The simple acts of speaking, sharing, and listening bring out just how much we have in common and allow us to relate to each other on a personal level. I discover that we share common goals, all trying to reach out to Jews who are at risk of being lost to our nation, all wishing to strengthen the future of the Jewish people.

That is something that I feel is missing in Israel at times, that sense of Jewish unity. I feel that unity at the GA. And just for that, it was worth going. Despite the lack of coffee.

About the Author
Sara Shamansky is a writer and blogger whose work has appeared in a wide range of Jewish publications, including Mishpacha Magazine, the Jewish Press, and Israel Short Stories. She writes about her experiences as a young woman in Israel’s Orthodox community. Sara currently resides in the Yeshiva University's Gruss Kollel in Israel with her husband.
Related Topics
Related Posts
Comments