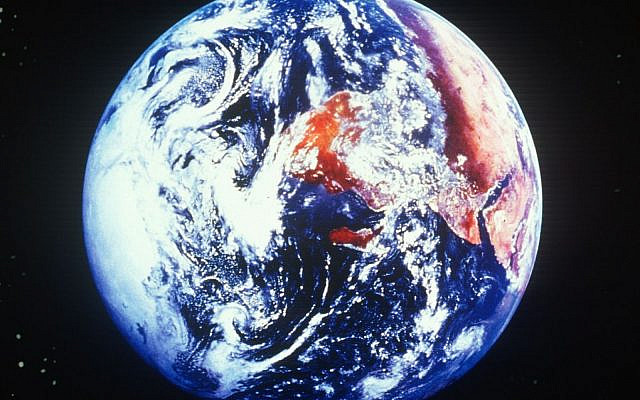 That's Us Down There (VISIONS OF AMERICA/UIG/GETTY)

I have been putting a lot of thought into my next Blog – it will be the one hundred and fiftieth blog since I started some four years ago. How can I sum up the hours of effort? Does anyone read them?

A short while ago, I would have asked myself if my Blogs have changed the world? Now I find that the world has indeed changed, but sadly I had no part in it.

Usually I open The Telegraph, one of the UK’s leading newspapers, for inspiration. There is always a story, sometimes humorous, sometimes serious, that starts me on my way. But today there is nothing but corona, corona, corona. From the latest deaths to the police enforcing non-existent laws against sunbathing there is almost no story without a corona twist. And to really cheer us up, we are told that Britons fear years of hardship and that airfares could double after the coronavirus lock-down ends. The only relief from stories about corona is, of course, anti-Semitism in the Labour party – Sir Keir Starmer faces his first crisis as anti-Semitism campaigners threaten legal action over leaked a Labour report (names of the anti-Semitism whistle-blowers were leaked to the press).

So, no help from the Telegraph. I glance at the Times of Israel and there, among the usual doom and gloom stories is a ray of light – “Amid pandemic, whales enjoy human absence in Mediterranean”. And it’s not just the whales. Many wild animals are coming out into a world that is now clear of humans. While we are locked up in our cages, the animals are free to roam at will.  In Yosemite National Park coyotes and bobcats have been seen prowling the empty roads, and the bear population appears to have quadrupled.

Fortunately, reports of Russia’s President Vladimir Putin releasing 800 lions onto the streets to keep people inside during the lock-down turned out to be fake news.

For the first time in many a year, the snow-covered Himalayas are visible in their shinning glory from the Punjab, some 125 miles away. As a result of the desperate efforts to stop the spread of the virus, most flights have been cancelled, factories closed, roads throughout the world have become a pedestrian’s paradise. Global warming has been put on hold.

We humans have always considered ourselves to be the rulers of the world. Most people would be surprised to learn that this title actually belongs to the ants. Whereas humans can live in a narrow range of climates; the ants are everywhere, no matter how extreme. Ants are found in tundra and rain forests, in swamps and deserts, they go deep beneath the earth and high in the trees. But at least we can see ants. We know when they are with us. We are now contending with a new rival for ruler of the world – the corona virus. We cannot see this enemy. By the time we know it’s there, that we are under attack, it is too late.

It is almost as if the Earth has something against us humans. We are reminded of the Gaia theory. This theory, developed in the 1970s, proposes that living organisms interact with their inorganic surroundings on Earth to form a synergistic and self-regulating system that helps maintain and perpetuate the conditions for life on the planet. In other words, the Earth knows how to look after itself and has ways of dealing with organisms that upset the carefully constructed life-supporting environment. While there are other inhabitants of this Earth who make some small changes; beavers that dam rivers, rats that build huge underground cities, none come close to us humans for re-building the Earth to suit ourselves, no matter what the cost.

So, we ask ourselves, where will it end? Just how far is Gaia prepared to go to protect the Earth? Will the virus fade away in a month or so leaving a few thousand dead, or will it continue to blast its way round the world with many millions of deaths? Will we humans come up with a vaccine that will leave Gaia puzzled and frustrated?
Hopefully, you will be able to get the answers in my two hundredth blog.