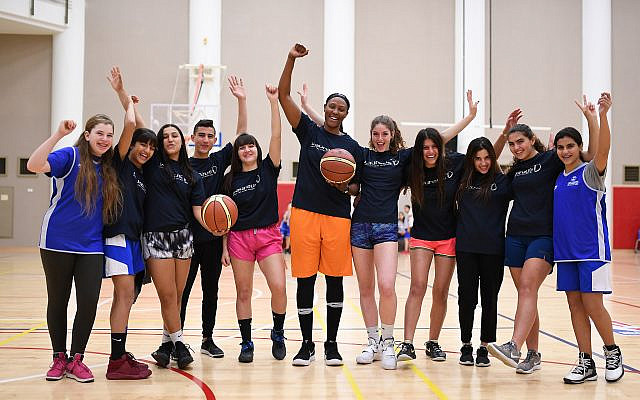 Members of the PeacePlayers Jerusalem All-Stars basketball team with Chamique Holdsclaw, a former WNBA All-Star, an Olympic Gold Medalist, and a Laureus sports ambassador, who was on a visit to Israel. Spring, 2017.

The ninth-grade girl dribbles the basketball down the court, makes a move, and then launches a three point shot. It’s a perfect swish. The fans let out a big cheer, with younger kids happily making noise on their mini blow horns. You can see the excitement in the diverse crowd, and of course there is the requisite food, a post-game picnic dinner brought by the families for the girls’ teammates and their supporters. These girls are playing under the banner of PeacePlayers, whose basketball teams include Jewish and Palestinian youth from all over Israel and the West Bank. They are so fierce, so brave.  Anything to do with girls and sports, sign me up. I am in. 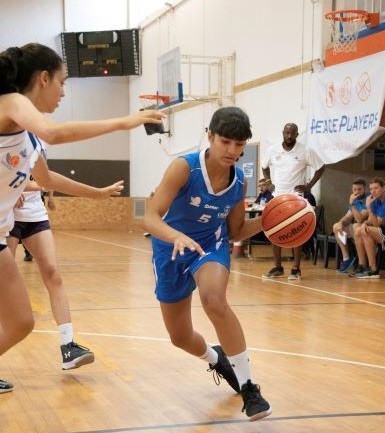 Sireen, a 15-year old Palestinian participant from East Jerusalem, playing at the Middle East Friendship Games. She first started with the Beit Safafa “Minis” Team, comprised of boys and girls from her community. Following her participation in the Twinnings program (joint activities with an Israeli team) monthly, she then joined the Jerusalem All-Stars team at age 11. Summer, 2019. Photo Credit: Itamar Cohen.

As teammates, these basketball players are part of a much larger community, the international NGO PeacePlayers, started almost twenty years ago by two brothers, Sean and Brendan Tuohey, who grew up playing pickup basketball games in their Washington, DC neighborhood. After spending time in Northern Ireland as basketball coaches, they recognized the easy accessibility of the sport and its stars, as well as its neutrality, not weighed down by controversial historical baggage. And since 2001, PeacePlayers International has been promoting basketball as a ‘diplomatic handshake’ and tool for peacebuilding in conflict zones around the world. 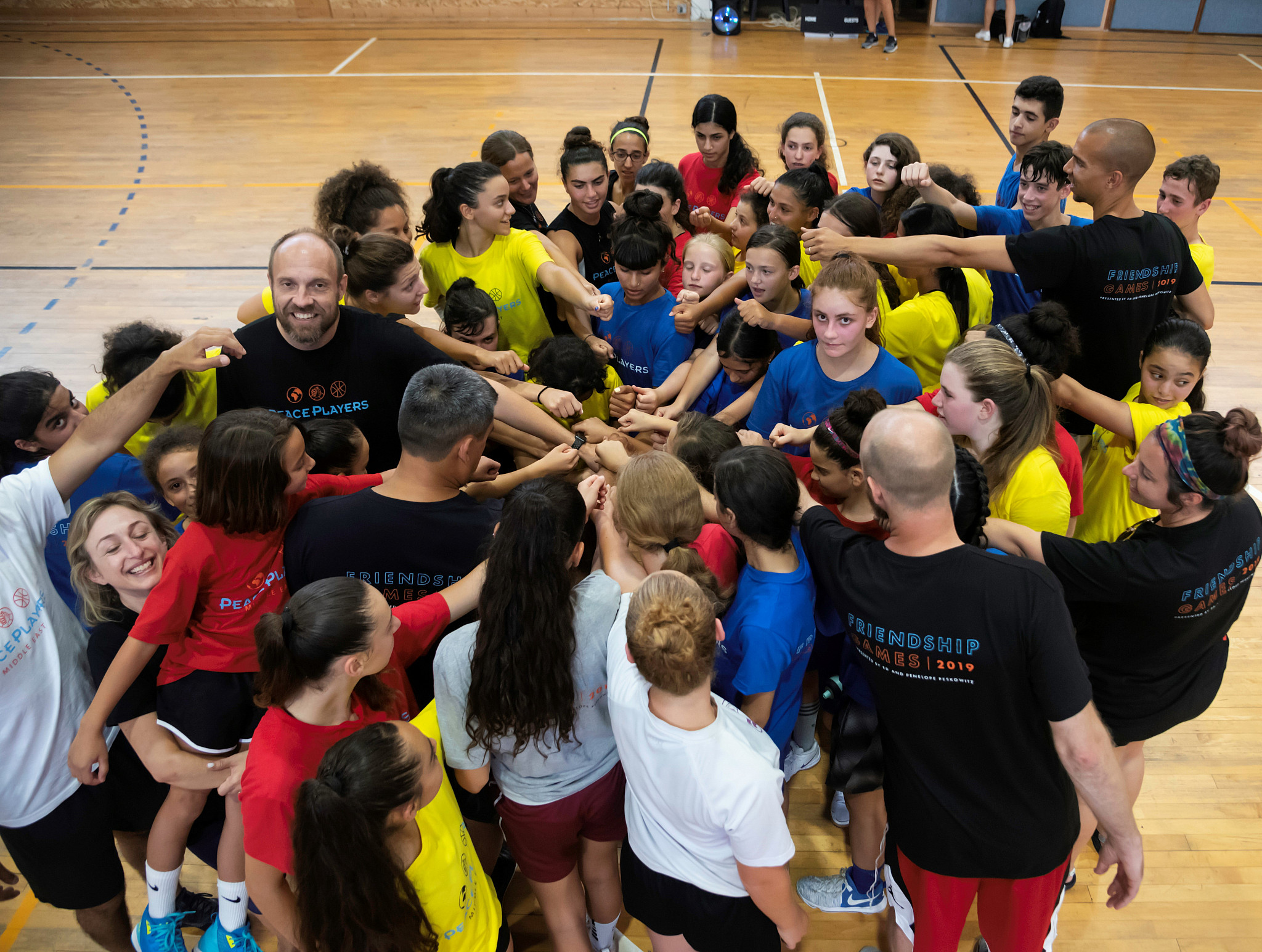 PeacePlayers Middle East Friendship Games held at Kibbutz Sdot Yam, where 50 Palestinian and Israeli youth from Jerusalem and Northern Israel came together for five days of basketball training and competition, conflict resolution workshops, and leadership training. Next summer Israel will host hundreds of youth for the Friendship Games from the Middle East, US, Cyprus, Northern Ireland, and South Africa. Summer, 2019.

Now I have to admit that I may be a bit biased about this game. I am mesmerized by the clock ticking at a dizzying pace, the sound of sneakers chaffing on the gym floor, the endless din of cheers, the buzzer going off. Okay, so my own basketball career may have peaked at age 15 when I participated in the 1986 Toronto Maccabiah games. But still, the lessons stick for life – how to navigate fast on your feet, how to make quick decisions, how to rebound from a missed shot and keep moving. Humility, teamwork, self- discipline. All of it. What I realize now is that I was learning grit, way back before that characteristic was championed as an essential quality to nurture in our kids. 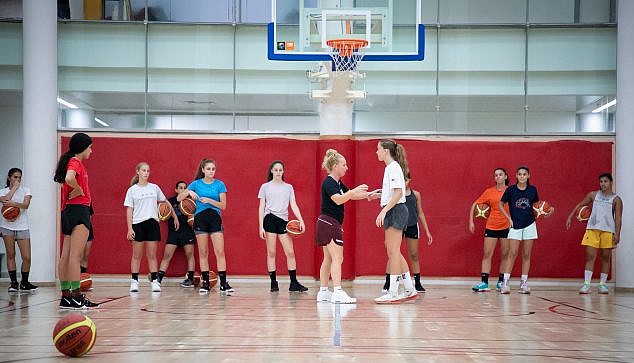 Coach Rebecca Ross with the Jerusalem All-Stars team during a practice at the Jerusalem International YMCA. Rebecca, who played on Israel’s National team, had never met a Palestinian before joining PeacePlayers as a basketball coach. Today, she coaches some 100 young women in Jerusalem – religious, secular, Arab and Jewish. Winter, 2020. Photo Credit: Roei Elman. 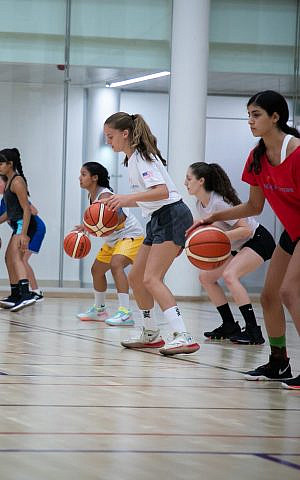 Members of the Jerusalem All-Stars team during a practice at the Jerusalem International YMCA, Winter, 2020. Photo Credit: Roei Elman.

And grit is exactly what these players have. They are young women, coming both from West and East Jerusalem, who are dealing with so much more than the pressure of the game. Yes, like teenagers around the world, they are figuring out how to navigate parental authority and leave childhood behind. But they also are living in the city that is at the heart of the conflict between Israelis and Palestinians, a conflict which continually shapes their choices and colors their options in life.

By being part of PeacePlayers, these girls have become proficient not only in layups and dribbling, but in how to build cross cultural understanding and steer through the constant political tensions swirling around them. And fittingly, this all takes place in a symbolic setting, for the home games and practices are held in the storied building of the Jerusalem International YMCA. It is an oasis of multicultural tolerance in this hotly contested city, bringing together Jews, Muslims and Christians for everything from youth orchestras to yoga classes.

As you might expect, being a PeacePlayer in Jerusalem is even more complicated than in other parts of Israel. One of the first problems is the reluctance of many Palestinians to let girls from their community play sports, definitely not a cultural norm. A second difficulty is the resistance to peacebuilding activities on the part of a weary local populace. For Palestinians especially, these activities are categorized as promoting ‘normalization’ and there is little support these days for any efforts that are perceived as maintaining an intolerable status quo. Coaches who come from East Jerusalem and the surrounding area speak of the risk of being ostracized, and they remain guarded about openly broadcasting their participation in PeacePlayers. 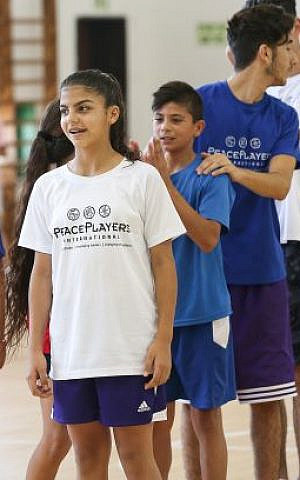 Or is a 16-year-old participant from West Jerusalem. With sisters in the program, she started PeacePlayers at an early age (she is 12 at the time this picture was taken at a ‘Twinning’ event in Ein Kerem). One of her best friends in the program is Sireen-featured above. Spring, 2016. Photo Credit: Jared Bernstein

The kids who join PeacePlayers come first and foremost to play ball. After all, it’s a free extracurricular sports activity with uniforms, occasional travel for games, and coaches who can easily become mentors. What happens over time though as they stay and the years go by, is that each of the players becomes part of a community of children and teens who would be unlikely to interact otherwise.

As teammates, they figure out how to communicate (Hebrew? English? Arabic?) and to build trust. This is also one of the reasons that PeacePlayers’ teams always play competitively, recognizing that competition unites the players. We all know that camaraderie and teamwork are essential ingredients in winning games.

During the half-time break, Karen Doubilet, who has led PeacePlayers expansion in the Middle East since its establishment here in 2006, introduced me to a veritable stream of coaches and former players. Many of the young women I met were trailblazers, members of the original team when PeacePlayers made history years ago. Back in 2010, PeacePlayers introduced the first integrated basketball team into the Israel National Basketball League’ with members from both East and West Jerusalem. It was the first ever opportunity for East Jerusalem youth to compete in the league. And the girls proved that coming from such different backgrounds they could still build a team and work together, actually winning the Israeli National League Regional Championship in 2014, and many championships since.

Time out, you may want to say. This is going to bring peace to the Middle East? Well, no, not exactly. But what I can say is that long term investments in peacebuilding efforts do matter. Just ask Northern Ireland. Peace may be made formally between diplomats but it’s also made between people. And the importance of building bottom-up ties between communities in conflict zones, through efforts such as dialogue, economic development, education, and even sports, helps to lay the groundwork for peaceful solutions over time. 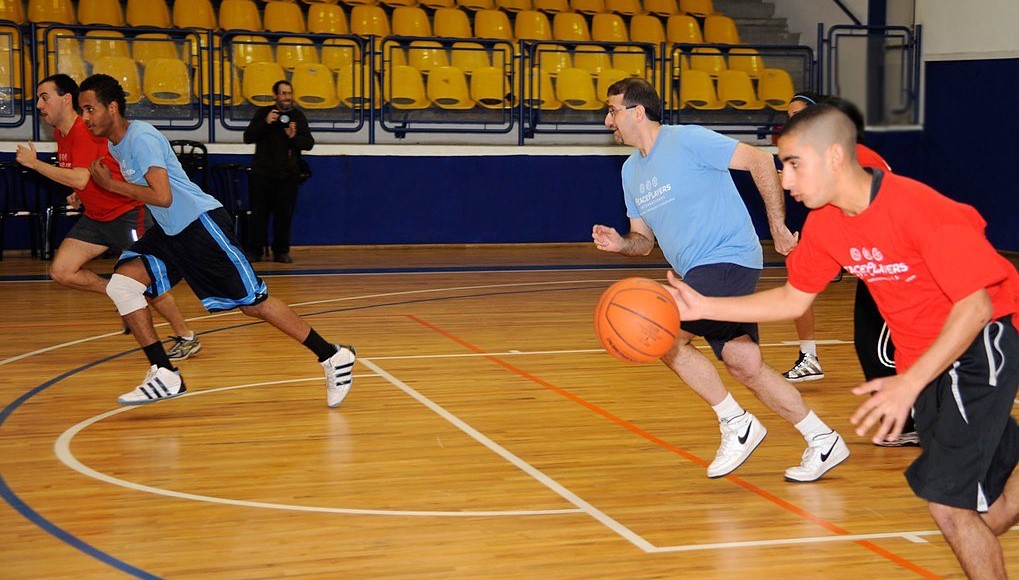 Not a basketball fan? That’s okay. Israel has many sports programs from budo to squash, from tennis to frisbee that bring youth from different communities together. And sports is just one of the many ways that civil society works to impact on the next generation in the hopes of moving past the conflict someday.

So maybe you would like to take a trip to see one of the PeacePlayers’ games at the Jerusalem International YMCA or at one of their many game locations around the country. With grit and determination, these girls are not willing to play it safe. They are ready to play out of their comfort zone, breaking barriers in all sorts of ways. Such troublemakers! Where can we find more of them? 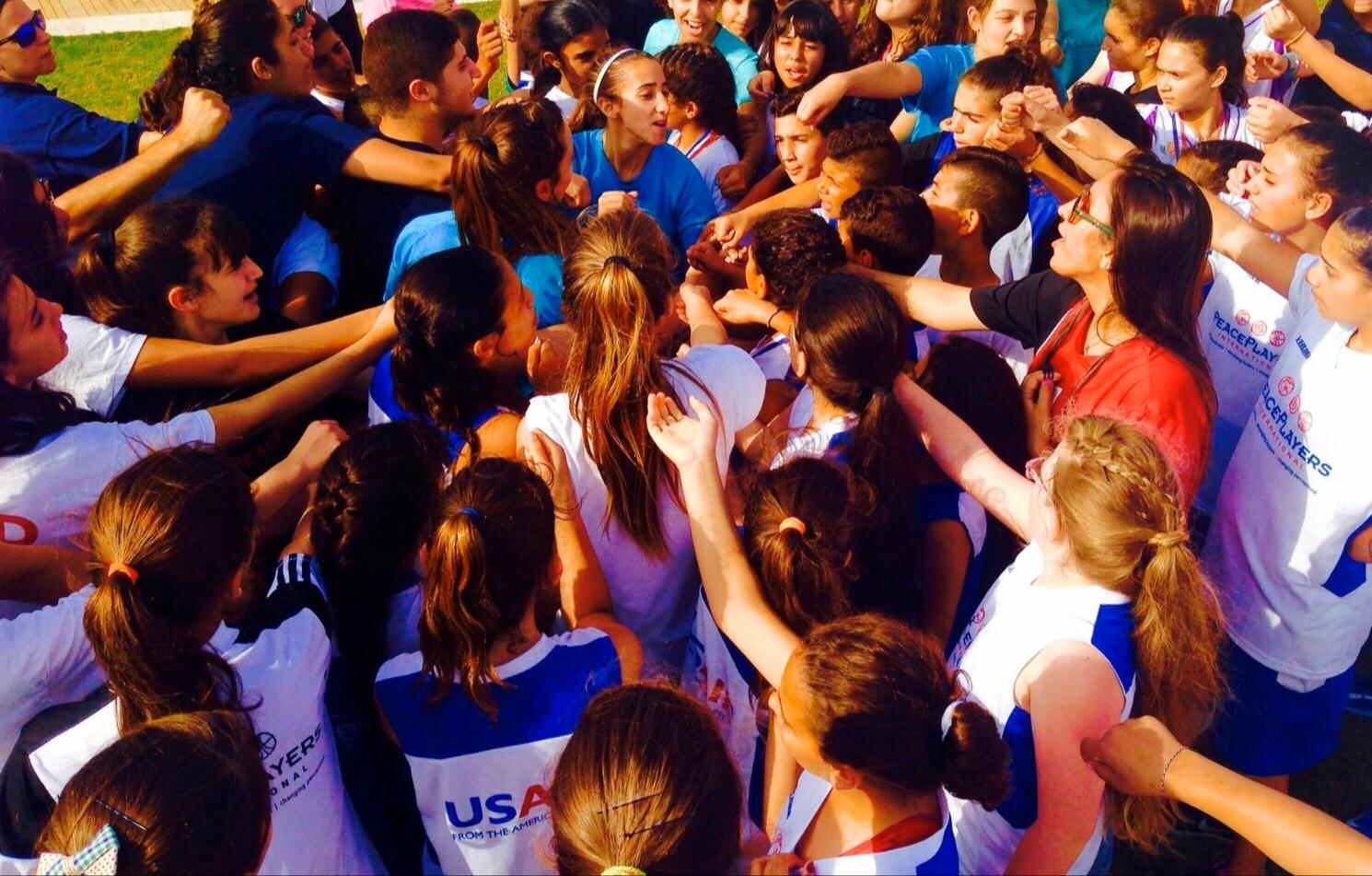 At center, Heni Bizawi, with many of the young people whom she coaches and mentors at the PeacePlayers’ Spring Festival. Heni, who started playing at age 15 with PeacePlayers, rejoined PeacePlayers upon completion of her Israeli army service and is now Director of Program Operations. Spring, 2018.
About the Author
Dr. Nancy Strichman teaches graduate courses in evaluation and strategic thinking at the Hebrew University’s Glocal program, a masters degree in International Development. Her research has focused on civil society, specifically on shared society NGOs and gender equality in Israel. She lives in Tivon, Israel with her four children and her very patient husband.
Comments