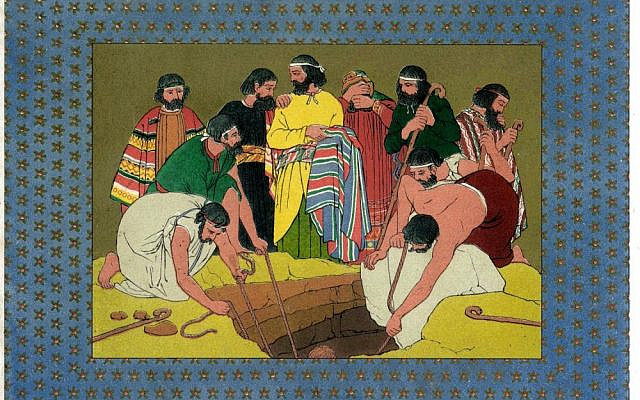 'Joseph Cast into the Pit,' illustration by Owen Jones from 'The History of Joseph and His Brethren' (Day & Son, 1869). (Wikipedia, public domain)

Joseph’s coat was elegant, the cut was fine;
The tasteful style was the ultimate in good design…


I look handsome, I look smart.
I am a walking work of art.

With these lyrics, Andrew Lloyd-Webber describes the “Amazing Technicolor Dreamcoat” and Joseph’s attitude towards it. In last week’s Torah portion, we are introduced to the “ketonet passim” that Jacob bestowed upon his young son, child of his beloved deceased wife, Rachel. There are several interpretations of what the words mean. A “ketonet” is a tunic but “passim” is less clear. It is translated variously as colorful, striped, or made of fine wool or silk.

One interesting interpretation is that “passim” indicates a floor-length garment with sleeves that covered the palm (“pas” in Hebrew). SHaDaL (Samuel David Luzzato, Italian scholar and commentary, 1800-65) points out that “The length of one’s clothing signifies liberation and prominence, (indicating) that one does not have to do manual work,” Little wonder, then, that Joseph’s shepherding brothers were not overly pleased with him.

Joseph is introduced to us as a “na’ar” (youth). Rashi comments that this is less an indication of his age than it is a critique of his adolescent behavior in being overly concerned with his appearance. Consider a teenager taking endless showers and spending hours on his hair. Joseph proudly wears the special clothing that emphasizes his select status.

We are then told the fate of Joseph and his coat. The garment is ripped from his body, and he is sold as a slave into Egypt. So much for his dreams and delusions of grandeur! And the “coat of contention” is dipped in animal blood and brought before Jacob who deduces that his beloved son has been torn apart by wild animals. So much for Joseph’s elegant tunic.

Later in the Torah portion, we find the handsome Joseph having been promoted to the position of head servant in the household of Potiphar. Once again, he is certainly dressed as befits his elevated position. Rashi comments critically that Joseph, once again, returned to being overly involved with his outward appearance and position.

This time, too, his new and elegant garment is ripped from his body by the seductive wife of Potiphar who, because she is spurned by the good-looking youth, retains his clothing as “proof” that he was attempting to seduce her! Once again, Joseph’s fine attire has betrayed him.

However, that is not surprising. For the Hebrew word for garment, beged, is closely related to the word boged, meaning “traitor.” Joseph’s first two elegant outfits have proved treacherous. He has been parading as a favorite son and as an esteemed servant but both roles have been removed as quickly and as harshly as the symbolic clothing.

We now come to this week’s portion of Miketz. Although Joseph has “prospered” in prison, he remains a slave and prisoner. However, it appears that he has matured and learned much during his incarceration. He is now called before the Pharaoh due to his reputation as “dream consultant” to interpret the ruler’s troubling nighttime visions. When he explains the symbolism to Pharaoh’s satisfaction and additionally suggests a national plan of action for handling the upcoming famine, he is promoted to viceroy of Egypt.

“And Pharaoh removed his ring from upon his hand and put it on Joseph’s hand. He then had him dressed in garments of linen and he placed a gold chain upon his neck” (Genesis 41:42). Once again, exceptional, even regal, clothing. A truly impressive display!

However, this time, there is no betrayal. Not only do the appurtenances of Joseph’s high position become him, but they also indicate his exemplary fulfillment of his duties. But even more than that, he does not absorb the outward appearances into his essential being. Outwardly a highly-placed Egyptian, he is inwardly a steadfast and loyal son of Israel and devotee of Hashem.

Commentaries note that this ability to be outwardly Egyptian but inwardly part of Jacob’s family, is a talent he passes on to his two sons, Menashe and Ephraim, who are born and raised in affluent Egyptian society. They too, are counted among the Children of Israel and each, in fact, becomes one of the 12 tribes. They also can dress as heathens, while remaining faithful to their true heritage.

This tension of outside/inside, of negotiating our Jewish lives in a secular world, is an ongoing challenge of Jewish survival. Our lives are certainly enriched and improved by “the wisdom of the nations.” But our ethics, moral standards, and proper conduct need to be directed and inspired by our one constant and traditional source of guidance. The Code that has prevented us from totally assimilating into the surrounding cultures which, in turn, have come and gone.

Our nation has lasted far longer than appeared likely two millennia ago. But only because we too are fueled by an unquenchable loyalty to our ancestors, to our history, and to our tradition.