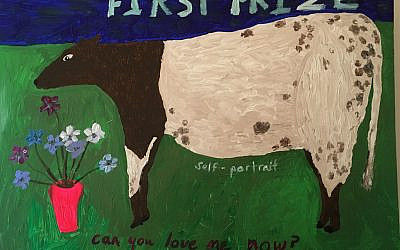 I have recently become somewhat obsessed with the Russian-American Jewish novelist, Gary Shteyngart. For those not in the Shteyngart-verse, Shteyngart’s most recent novel, Our Country Friends, is not only garnering the kinds of rave reviews in the kinds of big-time national newspapers and journals that writers like (in a word) me can only dream of, but is also popping up on pretty much every “best book of 2021” list ever concocted by the two or three people who, apparently, do all the choosing.  These same two or three people, by the way, are most likely the same people who hand out literary awards, advances, and book contracts. Or as my own literary agent once told me: “All of book publishing is run by one brain cell.” Bitter, so terribly bitter, and yet how true—especially if you’re not Gary Shteyngart or those in his class of big-time writers. Like (in a word) me.

Which isn’t my point at all! No indeed, because my point is that though I have not yet read Our Country Friends, I did read the author’s 2006 second novel, Absurdistan, and loved it. And I recently read two other of the author’s previous books, the novel Lake Success (which I found brilliant but brittle) and his memoir, Little Failure.  I loved the memoir so much I wished I had written it myself, except, of course, that’s impossible. So I revived my fantasy and wished that I had called my own memoir Little Failure, not because my own memoir had anything whatsoever to do with having tough-talking immigrant parents who routinely ridiculed me with labels such as “little failure,” but because it might have. Who’s the biggest little failure around? Me, that’s who.

Okay, not exactly, because unlike Shteyngart, whose parents simultaneously expected him to grow up to be an Ivy-graduated medical doctor/engineer/lawyer and berated him endlessly in hilariously splenetic and cruel Soviet-Jewish style, my own parents seemed merely to not expect much of me at all. Also unlike Shteyngart, whose parents left Leningrad without a ruble, settled in Queens, and then proceeded to work their asses off, my own parents were born into families that had already been in America for three generations. Unlike the young Shteyngart, I (and my siblings) grew up in the purple, in our case in suburban Virginia, in a large modern plate-glass and blue-slate house complete with a backyard swimming pool and private tennis court, ski vacations in Colorado, private schools, and pretty much anything else you can think of that money can and does buy.

But as money does do all kinds of things, such as pay for good psychotherapy, dental work, and real estate, it does not buy happiness, and that’s where Gary Shteyngart’s childhood and my own intersect-ish. Yes, I did just make up that word. My point is that though the author doesn’t know it, he and I are so alike we may as well be twins, albeit of the invisible and nothing-at-all-alike type.

I have twins who are also nothing at all alike, starting with their sexes.  So I know how this works. After reading Little Failure, I just know that deep down, on the soul-level, Gary Shteyngart and I are actually the same person.

Because here, in a nutshell, is both the engine and the theme of the book: No matter how successful I may, I cannot escape the conviction that I am and always will be a little failure.

But really, you’ve got to read the book for yourself, because it’s only about a zillion times more interesting than my reductive summation, above.

The book ends on a high note, with the author, now a well-established author, traveling with his parents to Leningrad where they revisit the scenes of the author’s earliest memories. And yet—

And yet this same author, now many books into his fame, continues to put stuff out into the world that would suggest that he’s not at all certain that he’s transcended little-failure-hood. For example, he recently allowed the New York Times to run a photo-feature on his country house. He’s talked on camera about his watch-collection on a video called “Talking Watches” produced by a watch-lovers organization called HODINKEE. He posts photos of self with fans at book signings. I know this from personal experience, as he and I are friends. Okay, we’re not friends. I’ve never met the man. But we are Facebook friends, which is almost the same thing. Shteyngart has almost five thousand Facebook friends, whereas I do not, but in other ways, he reminds me of myself, but on a much higher brag-fest worthy level. I along with every writer I know uses Facebook (and other social media platforms) to promote their work. That’s because, on the whole, we’re a desperate band of self-doubting, self-loathing, and endlessly envious malcontents. But Gary Shteyngart is big—bigger than big. So why does he too go in for all that desperate self promotion—unless of course deep down he’s still trying to outrun his inner little-failure?

That said, friendship is friendship, so I was a little bit peeved when, a few weeks back and inspired to write by my admiration for Little Failure, I used the Facebook “private message” thingy to write a letter to Shteyngart telling him that he really must own a painting I painted, and didn’t get so much as boo in response.  I also attached a photo of the painting so he’d understand why the painting must hang over his living room sofa. If I do say so myself, the painting—a self portrait in the form of a first-place winning cow called “Can You Love Me Now?”–says all that needs to be said about those of us who seek accolades, awards, fame, money, and all and any outward markers of success in the conviction that finally we’ll be loved the way we wanted to be way back when, when we were little failures. So please, if your name is Gary Shteyngart, and you’re reading this, give me a holler. I’ve got a painting I’ll sell to you at cost.