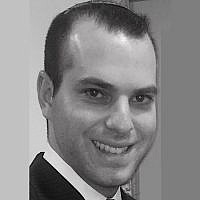 The Blogs
Eitan Kastner
Apply for a Blog
Advertisement
Please note that the posts on The Blogs are contributed by third parties. The opinions, facts and any media content in them are presented solely by the authors, and neither The Times of Israel nor its partners assume any responsibility for them. Please contact us in case of abuse. In case of abuse,
Report this post.

“Congress shall make no law respecting an establishment of religion, or prohibiting the free exercise thereof.” The First Amendment begins with these two clauses that describe the American government’s relationship with religion. The first clause forbids Congress from establishing a religion while the second prohibits Congress from preventing religious practices. No other right guaranteed in this amendment has two clauses. The other rights — speech, press, assembly, and petition — all just have one clause that bans their abridgment. For religion, though, the amendment does not just protect our own individual religion, it also shields us from unwanted state sponsored religion.

Of course, the First Amendment only addresses what the government can and cannot do. It does not directly dictate how we treat each other. Nonetheless, I find this paradigm useful for discussing religious freedom. Not only should we have freedom of religion, we should have freedom from religion, as well. Our rapidly fracturing American society would greatly benefit if everyone internalized this notion.

Unfortunately, the dual nature of religious liberty sets a trap for us. What do we do when a person’s free exercise of religion infringes on someone else’s freedom from that religion? More importantly, how should the government respond if such a dispute ends up in court? These are not hypothetical questions. These issues come up all the time and how we choose to deal with them will either help bring the country together or further rend it apart.

Masterpiece Cakeshop v. Colorado Civil Rights Commission, the “Gay Wedding Cake” case currently pending before the Supreme Court, showcases a prime example of this conflict. The story goes like this: A gay couple named David Mullins and Charlie Craig from Colorado sought to purchase a wedding cake from Masterpiece Cakeshop, a bakery owned by Jack Phillips. Phillips, an Evangelical Christian, told the engaged couple that he would not sell them a wedding cake since gay marriage runs contrary to his religion, though he did offer to sell them any other baked-good for any other occasion. Mullins and Craig proceeded to sue Phillips under Colorado’s anti-discrimination law.

At first glance, this case seems straightforward. As an observant Jew, I am profoundly uncomfortable with the government punishing Phillips for abstaining from something that he deems sinful. Also, as a person whose parents owned and operated a kosher cafe, I do not like the federal government mandating the outcomes of specific encounters between proprietor and customer. Upon further inspection, however, the nuances of the case force a reevaluation of these ideas.

Many people with far better qualifications than I have attempted to tackle the legal aspects of this case, so I am not going to do that. Instead, I will take a different approach by focusing on its religious underpinning. To do so, I will ask a dangerous question: does Phillips’ particular denomination of Evangelical Christianity really outlaw selling a cake for a gay wedding? I accept that Phillips wholeheartedly believes that this act is sinful, but what if he is wrong? Is his belief enough to have this act protected under a religious freedom law?

Here is why this line of questioning is dangerous. Who is going to judge whether a person’s belief is legit? Who will ascertain if someone is faithfully complying with religious dogma? I do not think anyone in any government role should have the responsibility of verifying someone’s true beliefs or the veracity of their religious claims. When such cases do end up in court, the courts normally and simply trust the believer.  How could they do anything else? They are not a medieval inquisition or religious council.

Given this, let’s imagine that the Supreme Court rules in favor of Phillips. This could set a worrisome precedent. What would stop someone from banning all LGBT people from their establishment on religious grounds? What would prevent a business from claiming religious discrimination if they were forced to serve African Americans, or Muslims, or Jews, against their strongly held religious beliefs as they understand them? I normally shy away from the slippery slope argument but in this case a ruling in favor of Philips would already deposit us at the bottom of the slope.

If this seems like an overreaction, one need only look at America’s history to witness examples of the use of religion to justify discrimination and bigotry. In the nineteenth century, plantation owners frequently used the Bible to justify their abhorrent slavery. Evangelizing Protestants sought to proselytize among Catholic immigrants by forcing the reading of the King James Bible in public schools. Even in the more recent past of the 1960’s, segregationists in the South used religious arguments against integration, claiming that God separated the races, thus making it sinful to mix them. If you scoff at this interpretation of scripture or doubt the genuineness of the believers of these ideas, you are starting to appreciate the problem. Who will serve as an arbiter of these religious convictions?

So, what do we do? On the one hand, the government should not punish people for abiding by their religion. On the other hand, people should not use their religion as a smokescreen to discriminate or force others to abide by the rules of their faith.

My advice for this situation is this: do not let your personal religion make you a public bigot. Do not let your faith become another person’s problem. If you are uncomfortable with making a cake for gay weddings, maybe you should not make wedding cakes at all. If abortion and contraceptives run counter to your belief system, don’t go into obstetrics and gynecology. If you think race mixing is sinful, don’t have kids.

In an apocryphal story, a women asked Benjamin Franklin what sort of government he and the other framers crafted at the Constitutional Convention. He supposedly responded, “A Republic, if you can keep it.”

Our country has been torn apart before during the Civil War. A future violent schism could easily spring from an issue on which neither side is willing to compromise, like a religious issue. We should never assume that our system of government will work on its own or that our civil society will magically stand firm. It takes effort from all of us to ensure the longevity of everything that makes America wonderful. Sometimes this means putting the well-being of everyone before our own deeply held beliefs. Sometimes it means avoiding a potential conflict rather than fighting a fight that no one will win. And always it means respecting both people’s freedom of religion and freedom from religion. If we are to keep our republic, we all must remain mindful and cautious that we do not burden or discriminate against others when bringing our faith into the public sphere.

About the Author
Eitan Kastner earned an MA in American Religious History from the University of Chicago. He is a high school history teacher.
Comments